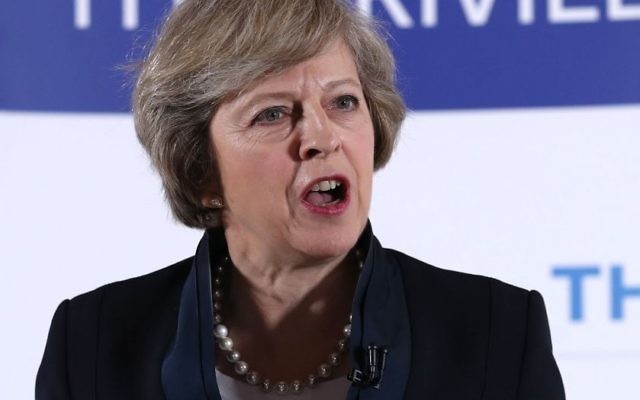 The UK will formally sign-up to an internationally-recognised definition of anti-Semitism that highlights modern expressions of hate, Theresa May announced on Monday.

The Government is to formally adopt an internationally-recognised definition of anti-Semitism that highlights modern expressions of hate, Theresa May has announced.

The prime minister revealed that Britain will become one of the first countries to individually adopt the International Holocaust Remembrance Alliance definition when she addresses 800 guests at Conservative Friends of Israel’s annual lunch in central London.

May told guests, including several members of the cabinet and hundreds of parliamentarians, that her aim for Britain is to be the same as Israel in guaranteeing the rights of people of all religions, races and sexualities – enabling all to flourish.

“It is unacceptable that there is anti-Semitism in this country,” she will say. “It is even worse that incidents are reportedly on the rise. As a government we are making a real difference and adopting this measure is a ground-breaking step.

”It means there will be one definition of anti-Semitism – in essence, language or behaviour that displays hatred towards Jews because they are Jews – and anyone guilty of that will be called out on it.”

The definition – adopted earlier this year by the IHRA which is made up of 31 member countries – states: “Anti-Semitism is a certain perception of Jews, which may be expressed as hatred toward Jews. Rhetorical and physical manifestations of anti-Semitism are directed toward Jewish or non-Jewish individuals and/or their property, toward Jewish community institutions and religious facilities.”

The IHRA highlights a number of contemporary examples that could constitute anti-Semitism including denying the Holocaust, drawing parallels between Israeli policy and the Nazis and accusing Jews of being more loyal to Israel than their home country.

Criticism of Israel similar to any other country cannot be regarded as anti-Semitic, it states.

The Government said its adoption will ensure that culprits will not be able to get away with being anti-Semitic because the term is ill-defined or because different organisations or bodies have different interpretations of it.

Communities Secretary Sajid Javid said: “Anti-Semitism must be understood for what it is – an attack on the identity of people who live, contribute and are valued in our society. There can be no excuses for anti-Semitism or any other form of racism or prejudice.

“Crimes must always be reported, and the law enforced, but we also want to create an environment that prevents hate crime from happening in the first place.”

Jonathan Arkush, President of the Board of Deputies, ‘warmly welcomed’ the Government’s adoption of the IHRA definition. He said: “With anti-Semitism on the rise it has become essential to have a clear definition against which to assess attitudes that are or may be racist. The adoption of the IHRA formulation will bring clarity and consistency and I warmly welcome its adoption by the Government.”

“I would urge the Government to work closely with communal bodies such as the CST in formulating the definition, and to then ensure it is widely adopted within civil society”.

Chief Rabbi Ephraim Mirvis said: “I would like to salute the Prime Minister for her leadership on this issue and for the Government’s commitment to tackling the scourge of antisemitism in our society.

“For some, calling out anti-Semitism has long felt like trying to strike a moving target with competing views about what is and is not acceptable. My hope is that the adoption of this definition will provide a clarity which will herald a far more effective discourse on the ways that we can highlight and challenge antisemitism wherever it is found.

“I would also like to welcome the Labour Party’s support for the definition and call upon other political parties and organisations worldwide to do likewise.”

Karen Pollock, Chief Executive of the Holocaust Educational Trust, said: “This definition will leave people in no doubt when a line has been crossed – a crucial step in the fight against antisemitism. As representatives for the UK to the International Holocaust Remembrance Alliance we are delighted this has been welcomed and adopted by Theresa May’s Government.”

Dr Moshe Kantor, President of the European Jewish Congress, said: “We welcome the UK’s landmark decision to define anti-Semitism, particularly in the face of rising attacks against Jews. The absence of a robust definition for antisemitism has allowed this insidious form of hate to develop beyond words and into hate crime and other violent actions.

“We must now look towards other European governments to follow the example set by the UK. The rise in antisemitism across Europe shows that there is a real need to create legal safeguards to ensure there can be no hiding place for people who would seek to spread hate and intolerance.”

And Rabbi Danny Rich, senior rabbi of Liberal Judaism, remarked: “Today’s attempt by the British Government, with cross-party support, to clarify a working definition of anti-Semitism is a welcome one. However, definitions have existed before and failed to assist those who have suffered from it, while some of the perpetrators have still evaded sanction. Context, in such cases, is frequently everything, and in a modern democratic liberal society – which Britain is – the balance between freedom of speech and sanction against those who seek to use it to harm others needs to be maintained.”

The move comes just two months after the Home Affairs Select Committee urged the Government and all political parties to adopt a slightly-altered version of the definition.

The Government will publish its official response to the Committee’s inquiry tomorrow, as well as providing an update on progress made in addressing the recommendations of the All-Party Parliamentary Group Against anti-Semitism in the wake of the rise in incidents following the Gaza conflict.