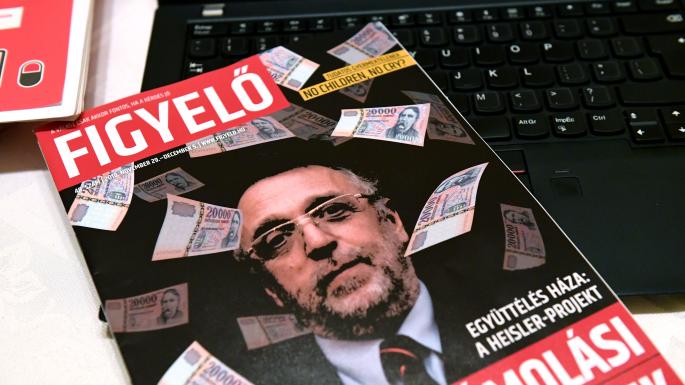 Dirty money is being moved out of Britain in the face of a crackdown on illicit wealth, the country’s most senior anti-corruption investigator told The Times yesterday.

The image on the front page of the Hungarian pro-government magazine could easily have been propaganda from Nazi Germany: a portrait of Andras Heisler, president of the Federation of Hungarian Jewish Communities, surrounded by a shower of high-denomination banknotes.

Yet the reaction there was muted. Viktor Orban, the right-wing prime minister and leader of the Fidesz party, refused to condemn the magazine. The leader of the ultra-Orthodox Chabad group denied the cover was antisemitic. Mr Heisler himself says he is in no rush to pass judgment.

Critics argue the silence over the magazine cover is the norm in a country whose Jews are haunted by a fear that dare not speak its name. Nine out of ten Hungarian Jews feel that antisemitism is strong in their country, according to an academic paper that points to a startling revival of anti-Jewish sentiment over the past decade.

Andras Kovacs, professor of Jewish studies at the Central European University in Budapest, found the proportion of Hungarians who wanted Jews to leave their country had doubled from 12 per cent in 2006 to 24 per cent in 2017.

Today 30 per cent would like to see limits on the number of Jews who can work in certain jobs, compared with only 16 per cent in 2013.

Professor Kovacs, 72, said the most obvious reason for the increase was the rise of Jobbik, an ultra-nationalist party whose MPs publicly espoused anti-Jewish views until a recent shift towards the political centre.

One particular source of tension is the prime minister’s efforts to rehabilitate the reputation of Admiral Miklos Horthy, who ruled Hungary from 1920 to 1944 and oversaw the deportation of tens of thousands of Jews to Nazi concentration camps. Mr Orban, 55, has hailed Horthy as an “exceptional” statesman and sought to portray the Hungarian Holocaust as an almost purely German persecution inflicted on his country.

The revision of history is particularly painful for Mr Heisler, 64, whose 92-year-old mother, Rosza, was sent to Auschwitz under Horthy’s regime. “To her, nobody can explain that only the German army was responsible for the Holocaust,” he said. “My mother saw her first German soldier in Auschwitz. All the deportation was carried out by the Hungarian authorities.

“We cannot accept that Horthy was an excellent politician. For the Jewish community, Horthy is one of the people most responsible for the Holocaust, for 600,000 dead Jews.”

Moshe Kantor, president of the European Jewish Congress, also condemned the “minimisation” of Hungary’s active role in the Holocaust. “Any attempt to equate the systematic extermination of Jewish lives with the situation faced by the wider Hungarian population during the Nazi occupation sets a dangerous precedent,” he said.

Mr Heisler is not the only prominent Jew to have been on the receiving end of smears. Mr Orban’s invective against George Soros, the Hungarian-born Jewish philanthropist who has poured tens of millions of pounds into liberal causes, has been heavily criticised for its perceived antisemitism.

Yet Mr Heisler and other Jewish leaders are reluctant to criticise the prime minister directly. “The government helped to restore the synagogues, the Jewish cemeteries, the Jewish hospital,” Mr Heisler said. “In Budapest the physical security is much better for the Jewish community and for Jewish institutions.”

Two recent studies have even suggested that Hungary is one of the few European countries where the number of actual antisemitic attacks has declined since 2012, although the vast majority of its 100,000 Jews are still deeply worried about their future.