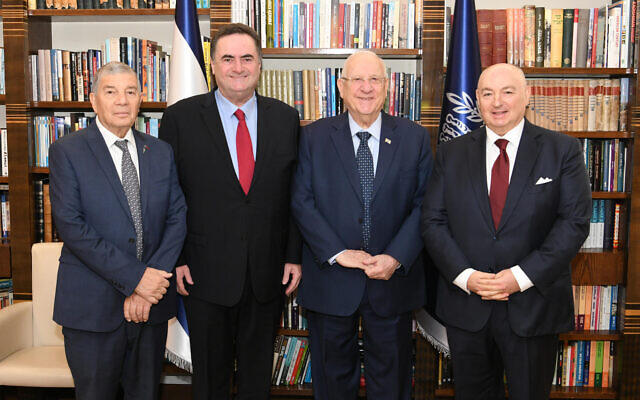 President Rivlin says ‘one of a kind’ gathering in Jerusalem in January will also be attended by presidents of Germany, Italy and Austria and many other leaders

President Reuven Rivlin said Wednesday that some 30 world leaders, including Russian President Vladimir Putin and French President Emmanuel Macron, will be coming to Israel in January to mark Internal Holocaust Remembrance Day in Jerusalem, in what is expected to be the largest-ever gathering focused on combating anti-Semitism.

Rivlin spoke at a press conference at the President’s Residence in Jerusalem ahead of the Fifth World Holocaust Forum, which will take place on January 23, 2020, at the Yad Vashem museum in the capital under the title “Remembering the Holocaust, Fighting Antisemitism.”

The president said that Putin, Macron and Germany President Frank-Walter Steinmeier, Italian President Sergio Mattarella and Austrian President Alexander Van der Bellen were among the leaders who had confirmed their attendance at the “one of a kind” event.

“In a few weeks I will be joined by heads of states and world leaders whom I have invited to be with me in Jerusalem to mark the 75th anniversary of the liberation of Auschwitz-Birkenau,” he said. “The presidents of Russia, Germany, France, Italy and Austria together with a representative of the United Kingdom, the king of Spain, the king of Belgium, and many other leaders will come to Jerusalem to discuss how we can fight anti-Semitism.

“We will come together to think about how to pass on Holocaust remembrance to generations who will live in a world without survivors, and what steps we must take to ensure the safety and security of Jews all around the world,” Rivlin added.

Foreign Minister Israel Katz said: “Holding this high-level event in Jerusalem, the capital of Israel, as we mark 75 years since the liberation of Auschwitz, has great historical and personal significance. I am the son of Holocaust survivors Meir and Malka Katz, may they rest in peace. My mother Malka Katz was in Auschwitz and was sent on the Death March. Since those dark days, we have defended and developed our homeland.”

Also during the press conference, Yad Vashem chairman Avner Shalev cautioned that some anti-Semitic tropes used by the Nazis to dehumanize Jews before and during the Holocaust “are present in our post-Holocaust global society.”

“Jewish life is once again under threat in Europe,” said Moshe Kantor, president of the World Holocaust Forum. “It is under threat from day-to-day harassment and attacks, on the streets, in schools, at universities, online, and even in their own homes. It has become so bad that the overwhelming majority of Jews in Europe no longer feel safe.”

A statement from the President’s Residence said: “The event takes place against the background of a rise in hateful and violent expressions of anti-Semitism, especially in Europe. Given this alarming situation, efforts to educate about the dangers of anti-Semitism, racism and xenophobia and to foster Holocaust commemoration and research have made this event more crucial and relevant than ever.”

Last month, the chief rabbi of the main Orthodox rabbinical alliance in Europe said that a resurgence of anti-Semitism on the continent “poses an existential threat to the Jewish community.”

Chief Rabbi Pinchas Goldschmidt of the Conference of European Rabbis told The Associated Press that he believed the receding memory of the Holocaust, rising far-right sentiment and radical Islam are the key factors fueling the anti-Semitic climate.