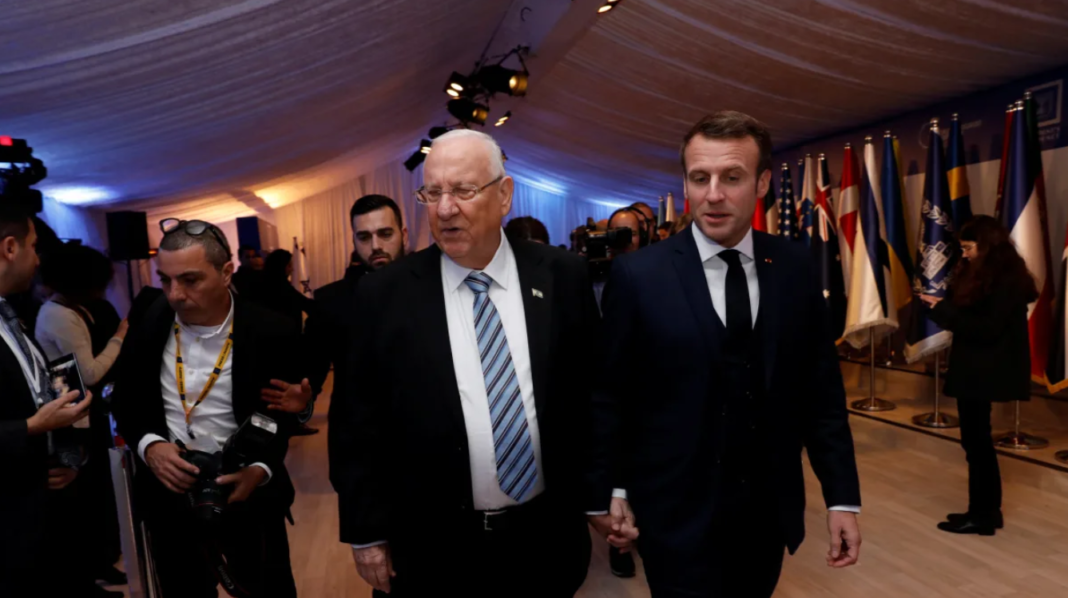 Netanyahu to meet with France’s Macron, U.S.’s Pence and Pelosi and Russia’s Putin for international forum to commemorate 75 years since the liberation of the Auschwitz-Birkenau death camp.

About 40 world leaders are expected to arrive in Israel over the next few days to attend the Fifth World Holocaust Forum, marking the 75th anniversary of the liberation of the Auschwitz-Birkenau concentration camp. Remembering the Holocaust, Fighting Antisemitism is the title of this year’s gathering, which will be held at the Yad Vashem Holocaust memorial and museum in Jerusalem on Thursday.

Among the world leaders scheduled to participate in the forum will be Russian President Vladimir Putin, French President Emmanuel Macron, U.S. Vice President Mike Pence, U.S. President Donald Trump’s senior adviser and son-in-law Jared Kushner and a special Democratic Party delegation headed by Speaker of the House Nancy Pelosi. All the leaders of the European Union will attend, as will Britain’s Prince Charles and many other heads of state. This is the largest diplomatic delegation ever to visit Israel, except for the funerals of former prime ministers Yitzhak Rabin and Shimon Peres.

Prime Minister Benjamin Netanyahu is expected to meet with Pence, Putin, Macron and Pelosi. With the Russian president, Netanyahu will discuss the request to pardon Naama Issachar, the Israeli-American imprisoned in Russia on drug charges. Russia’s Deputy Foreign Minister Mikhail Bogdanov arrived in Israel on Monday in advance of the visit, and will meet on Tuesday with Social Equality Minister Gila Gamliel, who has been mediating matters concerning Issachar. On Wednesday afternoon, Putin will inaugurate a memorial to the victims of the siege of Leningrad in Jerusalem’s Sacher Park.

Polish President Andrzej Duda decided to boycott the event after his request to speak at Yad Vashem alongside other leaders, headed by Putin, was denied. In recent months Putin has been conducting an anti-Polish campaign centered around the false claim that Poland was responsible for the outbreak of World War II. Duda is afraid that Putin will exploit the Yad Vashem platform to continue distorting history by downplaying the role of the Soviet Union in the outbreak of the war and bluring its crimes against the Polish people.

Israeli sources said that “out of 41 heads of state, 40 asked to speak, and all accepted the refusal with understanding except for the Poles.” Yad Vashem explained that the representatives chosen to speak are those whose countries were involved in liberating Europe from the Nazi occupation. Poland claims that considering that Russia signed the Ribbentrop-Molotov treaty with the Nazis that gave rise to the war, France collaborated with the Nazis and Germany brought about the Holocaust, it is unconceivable that the presidents of Russia, France and Germany be allowed to speak while the representative of Poland, Nazi Germany’s first victim, cannot. Poland will be represented at the forum by Ambassador Marek Magierowski.

The person behind the event is Moshe Kantor, president of the European Jewish Congress who procured the sponsorship of Rivlin and Yad Vashem. Due to Kantor’s close ties to the Russian government, Poland claims that he was involved in the decision to give priority to the Russian president and prevent Duda from speaking.

The event in Yad Vashem will take place four days before the official event commemorating the 75th anniversary of the liberation of Auschwitz. The ceremony will take place at the site of the camp in Poland, as it does every year. Duda will speak at the Polish event, which will be attended by Rivlin and Steinmeier.

Israel hopes for the adoption of the official definition of anti-Semitism formulated by the U.S.-based International Holocaust Remembrance Alliance, which states that criticism of Zionism or the existence of the State of Israel is considered anti-Semitic. In recent years Israel has worked to promote this definition as well as laws against the boycott, divestment and sanctions movement.

Rivlin, the official host of the event, will hold a reception and dinner for the delegation heads. Speakers will include Rivlin, the King of Spain as a representative of the world leaders and Israel Prize laureate and Holocaust researcher Prof. Yehuda Bauer. David D’Or, Miri Mesika and Amir Benayoun will perform “The Last Survivor,” the song written for the 2018 Knesset delegation to the March of the Living, an annual educational gathering in Poland dedicated to the Holocaust.

Jerusalem’s mayor, the Foreign Ministry and the Jewish National Fund will hold a special event for the hundreds of journalists arriving with the various delegations.

The Israel Police and the Jerusalem Municipality warn the public of serious traffic problems in the city during the events.