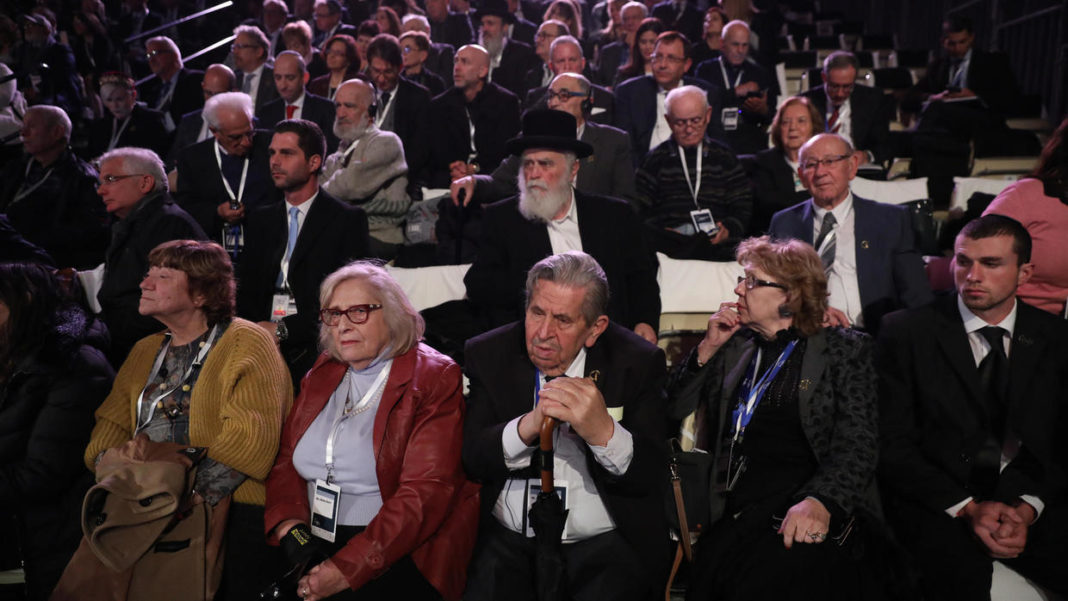 Their faces lined by age and haunting memories, about 100 Holocaust survivors joined political leaders Thursday in Jerusalem to recall the liberation of the Auschwitz death camp 75 years ago.

While many of the dignitaries at the sombre ceremony were born after World War II, with no personal memories of Nazi Germany’s industrial-scale murder of Jews, for 81-year-old Yona Amit, the event was deeply personal.

Just five years old when she and her family escaped Nazi-occupied Italy for Switzerland, she spoke of her remarkable survival, accompanied by her granddaughter at the Yad Vashem Holocaust memorial centre.

Amit said her family was forced to flee her home by horse and cart, spending much of the war in hiding.

“We couldn’t travel as Jews, because they collected the Jews and they took them straight to Auschwitz,” she told AFP.

The escape through the Alps was horrifying, she said: “It wasn’t easy, it was the most terrible thing – the Germans, with their Alsatian dogs looking for us.”

She remembers one day playing with her cousin, and exchanging shoes, before they were separated and her young relative was betrayed to the Nazis by smugglers.

“My shoes are in that big mound of shoes in Auschwitz … I am here.”

More than a million people – most of them Jews, but also ethnic minority members, communists, homosexuals and others – were killed at the extermination camp in Nazi-occupied Poland.

Amit finally reached Israel in 1949, going on later in life to also teach Hebrew in South Africa and Australia.

On Thursday she was at Yad Vashem, along with hundreds of journalists and other survivors there to listen to speeches by leaders such as Israeli Prime Minister Benjamin Netanyahu and Russian President Vladimir Putin.

Amit said the event was an opportunity to remember those who took grave risks to save European Jews.

“So many priests, and so many monasteries, endangered their lives to save Jews,” she said.

“I think this is the most important message of this war. Not the horrible things that were done – we all know about them – but the simple people who helped.”

Yad Vashem chairman Avner Shalev, who had a fall days before the event, reached the stage on crutches, joking that breaking a leg was good luck ahead of such an occasion.

He and Moshe Kantor, founder of the World Holocaust Forum which organised the event, both spoke about the importance of continuing the fight against anti-Semitism.

But Fanny Ben Ami, whose parents were killed in Nazi extermination camps, told AFP she feared that anti-Semitism will not be eradicated.

“I think that the leaders of the whole world have come, above all, to affirm that anti-Semitism is a plague, but … nothing changes,” said the 89-year-old.

Ben Ami joined the French resistance at the age of 12, helping children flee to Switzerland, and emigrated to Israel in 1957.

Auschwitz survivor Nahum Rottenberg also voiced doubt about what could be achieved at the memorial, dubbed the most important event Israel has ever hosted.

The frail 92-year-old talked with tears in his eyes about his family who died at Auschwitz.

“I fight against anti-Semitism each time I tell my story,” he said.

He voiced dismay at present-day wars raging unabated, including in the Middle East.

“Today we kill in Syria and elsewhere,” he said. “The world keeps quiet. I don’t think that things will really change.”