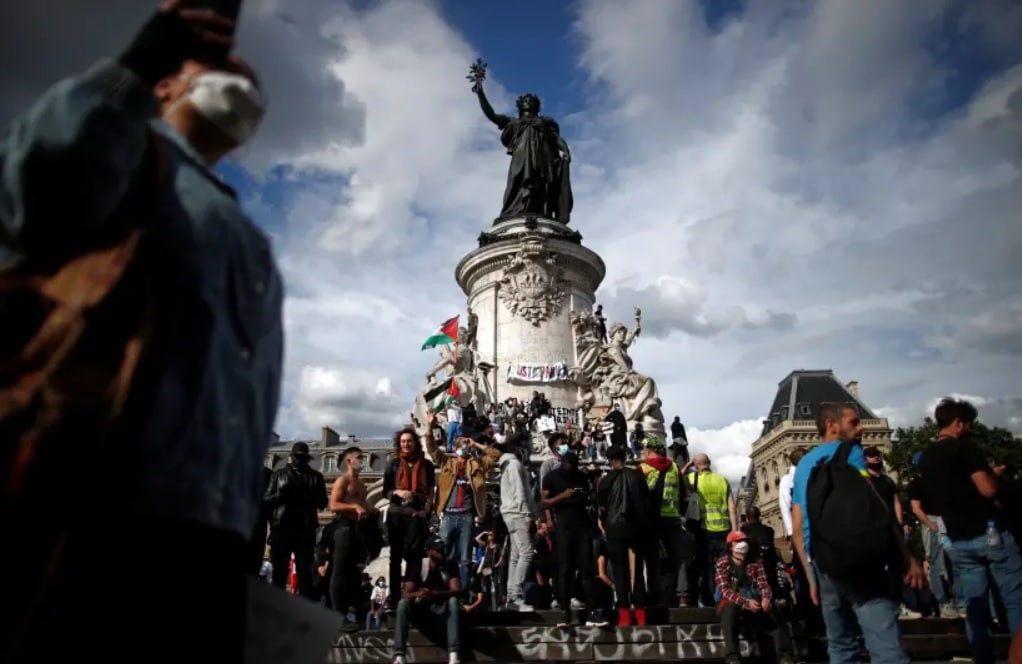 In light of the Black Lives Matter rallies that have been taking place in protest against police brutality in the US, French protesters gathered in the city to protest the death of Adama Traoré, a Malian French man who died in police custody in 2016. According to Valeurs, tensions were running high as police first blocked the march from taking place, holding protesters in the square, and then a counter protest group dropped a banner from a nearby building reading “Justice for the victims of anti-white terrorism.”

In response, protesters were heard to yell “dirty Jews,” at the counter-protesters. The police prefect has reported these remarks to the magistrates, they said on their Twitter account.

In addition to the chants, to which the protesters raised their fists, i24 reported that protesters were seen wearing t-shirts reading “Justice for Palestine,” and waving Palestinian flags at the event. Placards being held aloft included the phrase “Israel, laboratory of police violence,” and another banner read “Stop the massacres by Israel. Liberty and justice for Palestine.”

Last week an American organization, the US Campaign for Palestinian Rights, likewise blamed the deaths of a number of African-Americans on Israel, claiming that the IDF trains American police offers in tactics that lead to human rights violations. The group tweeted: “The Israeli military trains US police in racist and repressive policing tactics, which systematically targets Black and Brown bodies,” with a link to a 2016 Amnesty International report making the same claim.

Crif, the umbrella organization for French Jewry, denounced the incident saying “There cannot be a fight against racism which directly or indirectly tolerates antisemitism in its ranks.”

Crif also noted the response of hard-left French member of parliament Jean-Luc Mélenchon who tried to cast doubt on the veracity of the incident, accusing the police on Twitter of “peddling antisemitic gossip” regarding the police report to the French courts.

“Perhaps Jean-Luc Mélenchon is deaf and blind once again when faced with antisemitism which comes from his ranks?” Crif said.

The organization also condemned the anti-Israel slogans and messages on display at the protest, saying it testifies to a desire to infiltrate a just and universal cause – anti-racism – with hatred of the Jews and Israel.”

The European Jewish Congress called on anti-racist marchers and organizers to ensure that “antisemitism is not being adopted by some within their ranks,” following Saturday’s incident in Paris.

“The people who claim to march against hate and racism while shouting violent antisemitic statements are hypocrites and acting against the worthy cause of the majority,” EJC President Dr. Moshe Kantor said.

“They are trying to hijack and piggyback on the justifiable anger and hurt of anti-racist demonstrators.”

“They have shown that they would rather sabotage an important rally for their own hate, displaying their true colors and showing their priorities. They are not anti-hate or anti-racist, they are just antisemites and the authorities should deal with them as people who incite to violence.”