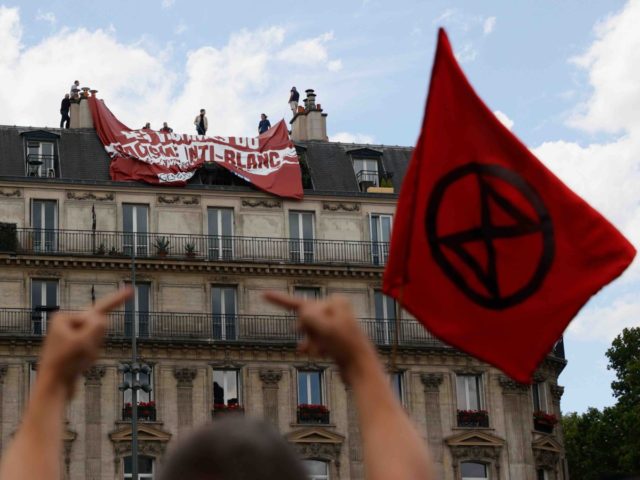 Protesters shouted antisemitic chants, including “dirty Jews,” at a massive demonstration against racism in central Paris, France, on Saturday.

The incident, which was caught on video, occurred in response to a counter-demonstrators who dropped a banner in Paris’s Place de la République that read, “Justice for victims of anti-white crimes.”

The original protesters, who had gathered in the square to protest the death of Adama Traoré – a Malian French man who died in police custody in 2016 – shouted the antisemitic slogans in response.

Protesters were also seen wearing T-shirts with the slogan “Justice for Palestine” and waving Palestinian flags. Placards included the phrases, “Israel, laboratory of police violence”; and “Stop the massacres by Israel. Liberty and justice for Palestine.”

The Paris police department said in a tweet that it reported the remarks to the French magistrates.

The slogans about Jews in Paris “are an insult to the Republic but also to the cause that the demonstrators claim to promote,” Francis Kalifat, president of CRIF, an umbrella group representing French Jewish communities, said in a statement Sunday.

The group also slammed the response of hard-left French lawmaker, Jean-Luc Mélenchon, who questioned the veracity of the incident, accusing the police on Twitter of “peddling antisemitic gossip.”

“Perhaps Jean-Luc Mélenchon is deaf and blind once again when faced with antisemitism which comes from his ranks?” CRIF said in the statement.

CRIF added that the antisemitic slurs also demonstrate “a desire to infiltrate a just and universal cause – anti-racism – with hatred of the Jews and Israel.”

In response to the incident, the European Jewish Congress called on anti-racism protest organizers to ensure that “antisemitism is not being adopted by some within their ranks.”

“The people who claim to march against hate and racism while shouting violent antisemitic statements are hypocrites and acting against the worthy cause of the majority,” EJC President Dr. Moshe Kantor said.

They are trying to hijack and piggyback on the justifiable anger and hurt of anti-racist demonstrators.”

“They have shown that they would rather sabotage an important rally for their own hate, displaying their true colors and showing their priorities. They are not anti-hate or anti-racist, they are just antisemites and the authorities should deal with them as people who incite to violence.”