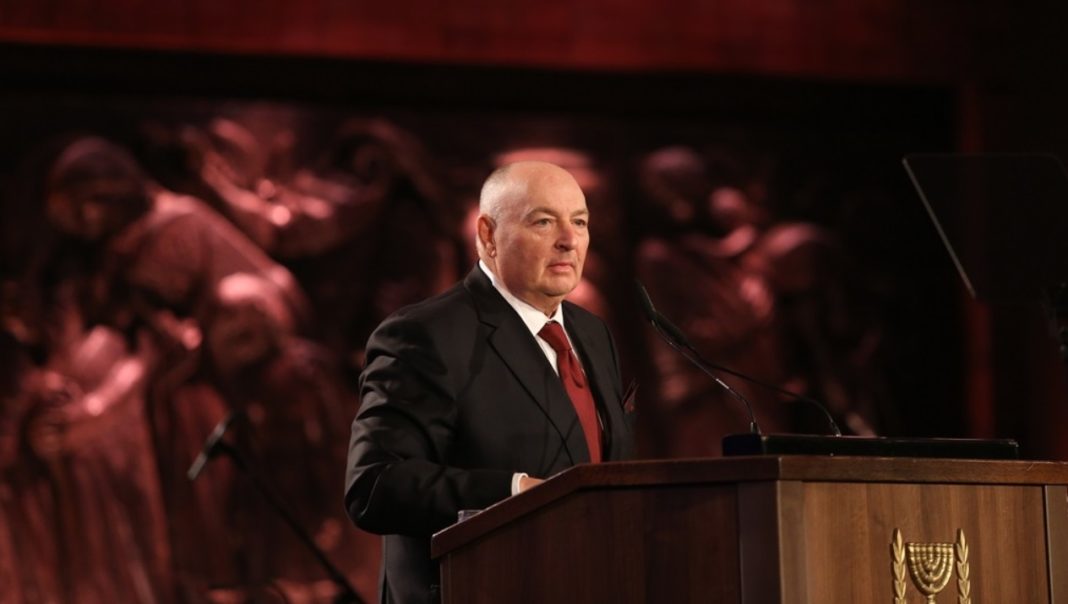 “Despite the challenges of COVID-19 and rising antisemitism, European Jews are determined to continue working together to overcome these challenges and strengthen Jewish life in Europe.”

Dr. Moshe Kantor, who ran unopposed, was reelected as President of the European Jewish Congress (EJC) on Tuesday, during the virtual General Assembly that gathered leaders from 42 European Jewish communities.

For Kantor, a 67 philanthropist and businessman who received his PhD in Sciences with a specialization in Spacecraft Automatic Control Systems who was first elected in 2007, this vote is resounding more as a vote of confidence in his leadership by the representatives of Europe’s Jewish communities.

Marie van der Zyl, president of the Board of Deputies of British Jews, was also reelected as Chair of the Council.

Kantor is responsible for what is considered as the largest diplomatic event in the history of the State of Israel – the Fifth World Holocaust Forum, held in January at Yad Vashem in Jerusalem, that was attended by some 50 heads of state and leaders from around the world.

“In am honored and humbled by the support shown in my leadership by Jewish leaders and communities across the continent,” Dr. Kantor said. “European Jewry is a thriving force in the global Jewish world, and we remain at the forefront of fighting antisemitism, defending Jewish tradition and reinvigorating Jewish communities and institutions.”

In recent months, under Kantor’s leadership, crucial actions were undertaken both against the rising of antisemitism in Europe and the impact of the COVID-19 in European Jewish communities. The EJC worked for the implementation of the IHRA definition of antisemitism on the national level, and has acted to provide support for Jewish communities and institutions facing the difficult COVID-19 situation, such as schools, community centers or other organizations vital to European Jewry.

“These have been very challenging times for European Jews”, Dr. Kantor continued. “I witness in my conversations with Jewish leaders, heads of state and decision-makers around the continent that despite the challenges of COVID-19 and rising antisemitism, European Jews are resolute and determined to continue working together to overcome these challenges and strengthen Jewish life in Europe.”

During the virtual meeting, Emmanuel Nachshon, ambassador of Israel to Belgium and Luxembourg, and Nancy Khedouri, senior Jewish member of the National Assembly of Bahrain briefed European Jewish leaders on the recent historic Abraham Accords between Israel and the United Arab Emirates, Bahrain.

“I applaud your dedication for the prosperity and the protection of the European Jewish community by fervently engaging in the fight against antisemitism, and for the remembrance of the Shoah, a cause that you made it your own ever since your first engagement in public activity.”

“I was delighted to hear that Dr. Moshe Kantor has been reelected as President of the European Jewish Congress, put forward by British Jewry for the third consecutive time. This is a great tribute to Moshe for the wonderful work that he has done.” said Lord Michael Levy, Life President of Jewish Care and President of JFS.

“Congratulations to Moshe Kantor on his well-deserved election,” said Lord Eric Pickles, the UK special envoy for post-Holocaust issues. “His organization of the World Holocaust Forum earlier this year in Jerusalem was a dignified, moving and very effective way of remembering the 75th anniversary of the liberation of the Death Camps. Moshe is known and admired throughout the world as a champion of the truth.”

“Marie van der Zyl is also a champion of the truth. I have worked closely with her on our joint endeavor of tackling antisemitism in the UK. She is respected in government. Her unstinting support for the new Holocaust and Learning Centre next to Parliament makes her a powerful advocate for remembrance,“ added Lord Pickles.

“I also want to add my congratulations to Marie van der Zyl, for being elected as Chair of the EJC Council,” said Lord Levy. “This is particularly poignant for British Jewry as Marie is also President of the Board of Deputies.”