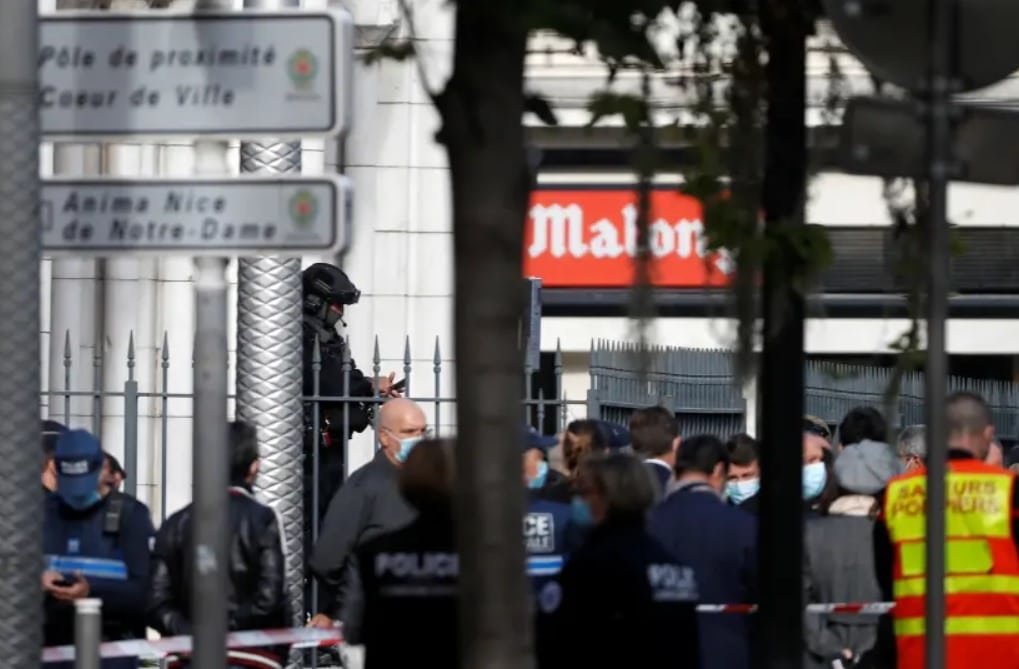 A knife-wielding attacker shouting “Allahu Akbar” beheaded a woman and killed two other people in a suspected terrorist incident at a church in the French city of Nice on Thursday, police and officials said.

Within hours of the Nice attack, police killed a man who had threatened passersby with a handgun in Montfavet, near the southern French city of Avignon. He was also shouting “Allahu Akbar” (God is Greatest), according to radio station Europe 1.

Nice’s Mayor Christian Estrosi, who described the attack as terrorism, said on Twitter it had happened in or near the city’s Notre Dame church.

Estrosi said the attacker had repeatedly shouted the phrase “Allahu Akbar,” or God is greatest, even after he had been detained by police.

One of the people killed inside the church was believed to be the church warden, Estrosi said, adding that a woman had tried to escape from inside the church and had fled into a bar opposite the building.​ “The suspected knife attacker was shot by police while being detained, he is on his way to hospital, he is alive,” Estrosi told reporters.

“Enough is enough,” Estrosi said. “It’s time now for France to exonerate itself from the laws of peace in order to definitively wipe out Islamo-fascism from our territory.”

Reuters journalists at the scene said police armed with automatic weapons had put up a security cordon around the church, which is on Nice’s Jean Medecin avenue, the city’s main shopping thoroughfare. Ambulances and fire service vehicles were also at the scene.

In Paris, lawmakers in the National Assembly observed a minute’s silence in solidarity with the victims.

Police said three people were confirmed to have died in the attack and several were injured. The French anti-terrorist prosecutor’s department said it had been asked to investigate.

A police source said a woman was decapitated. French politician Marine Le Pen also spoke of a decapitation having occurred in the attack.

Estrosi said the victims had been killed in a “horrible way.”

“The methods match, without doubt, those used against the brave teacher in Conflans Sainte Honorine, Samuel Paty,” he said, referring to a French teacher beheaded earlier this month in an attack in a suburb of Paris.

French Assemblyman Meyer Habib reacted to the attack on Twitter, saying that, “even during a state of emergency in France because of the coronavirus, coward islamists are slaughtering and beheading women in a church in the French city of Nice, “they are corrupting France’s face. We’re at war!”

A representative of the French Council for the Muslim Faith strongly condemned the attack. “As a sign of mourning and solidarity with the victims and their loved ones, I call on all Muslims in France to cancel all the celebrations of the holiday of Mawlid.”

The holiday is the birthday of the Prophet Mohammad, celebrated on Thursday.

Egypt’s al-Azhar, the 1,000-year-old seat of Sunni Muslim learning, condemned the incident as a “hateful terrorist attack” and warned against “violent and hate speech” in a reference to the display of images in France of the Prophet Mohammad.

Following the horrific murder that took place in Nice, Netanya Mayor Miriam Feierberg – which is Nice’s twin city – spoke with Estrosi, and expressed her pain and condolences on behalf of the city of Netanya over the stabbing attack that took place this morning.

In response, Estrosi told Fairberg, “We are one family.”

As a sign of sympathy, Fairberg instructed to hoist the French flags on the city bridges.

“Violence and hatred are a modern epidemic that must be stopped,” President Reuven Rivlin wrote on his Twitter account following the attack in France.

He added that “our hearts go out to families of victims of the heinous terrorist attack on a church in France, and we send a speedy recovery to the wounded. Terrorism, violence and hatred are a modern epidemic in our world that must be stopped.”

France’s Chief Rabbi Pinchas Goldschmidt, president of the Conference of European Rabbis, has also issued the statement following the terrifying attacks. “I am horrified by the barbaric attack in Nice this morning,” he said, adding that “Europe’s Jews pray for the victims and their families, and for the recovery of those injured.”

“Once again, murder has been committed in the name of religion and this appears to be the second similar incident in a matter of days. It is imperative that religious and communal figures make it clear that murder is abhorred by religion and such attacks stand in total contradiction to Islam’s explicit recognition of tolerance and compassion.”

The European Jewish Congress later released a statement expressing “shock and outrage” at the terror attacks in both Nice and Avignon.

“We are utterly shocked at the barbarity and sheer evil in these attacks on French citizens and on the French Republic,” EJC president Dr. Moshe Kantor said.

“These acts, coming so soon after the horrific beheading of a schoolteacher last week and clearly motivated by the same religious extremism, do not exist in a vacuum. Attacks on basic rights to freedom of speech and expression and the tolerance shown to Islamist extremism provides moral support for these acts of terrorism.

“The European Jewish Congress calls upon all European governments to take urgent and radical action to protect all citizens from this new but clearly well-established wave of Islamist terror, which attacks us physically in the streets while simultaneously attempting to undermine our core and collective values of tolerance and freedom of expression.

“As our communities have felt the results of such acts in recent years, Europe’s Jewish communities stand in solidarity with President Macron and the people of France and send our deep condolences to the families of the victims. Our thoughts and prayers for a speedy recovery for those injured in this terror attack.”

The Vatican on Thursday condemned the attack as well saying terrorism and violence were never acceptable.

“Today’s attack sowed death in a place of love and consolation, the house of the Lord,” spokesman Matteo Bruni said in a statement.

“It is a moment of pain in a time of confusion. Terrorism and violence can never be accepted.” He said Pope Francis had been informed and was praying for the victims. The pope hoped the French people would “respond in a united way to evil with good.”

“I am appalled to hear the news from Nice this morning of a barbaric attack at the Notre-Dame Basilica,” Johnson said on Twitter in both English and French.

“Our thoughts are with the victims and their families, and the UK stands steadfastly with France against terror and intolerance.”

Dutch Prime Minister Mark Rutte told the French people “you are not alone,” taking to social media to share a message of solidarity.

In a French message posted on Twitter he said: “We say to the French people: In the fight against extremism you are not alone. The Netherlands stands beside you.”

Calling it an “odious and brutal attack,” von der Leyen said the whole of Europe stood in solidarity with France and remained united and determined “in the face of barbarism and fanaticism.”

The Turkish Foreign Ministry also condemned the attack, and said that Turkey stood in solidarity with the French people against violence and terrorism.

“The kingdom categorically rejects such extremist acts, which contravene all religions…, while stressing the importance of avoiding all practices which generate hatred, violence and extremism,” said the statement published by the state news agency SPA.

The attack comes while France is still reeling from the beheading earlier this month of middle school teacher Paty by a man of Chechen origin.

The attacker had said he wanted to punish Paty for showing pupils cartoons of the Prophet Mohammad in a civics lesson.

It was not immediately clear what the motive was for the Nice attack, or if there was any connection to the cartoons, which Muslims consider to be blasphemous.

Since Paty’s killing, French officials – backed by many ordinary citizens – have re-asserted the right to display the cartoons, and the images have been widely displayed at marches in solidarity with the killed teacher.

That has prompted an outpouring of anger in parts of the Muslim world, with some governments accusing Macron of pursuing an anti-Islam agenda.