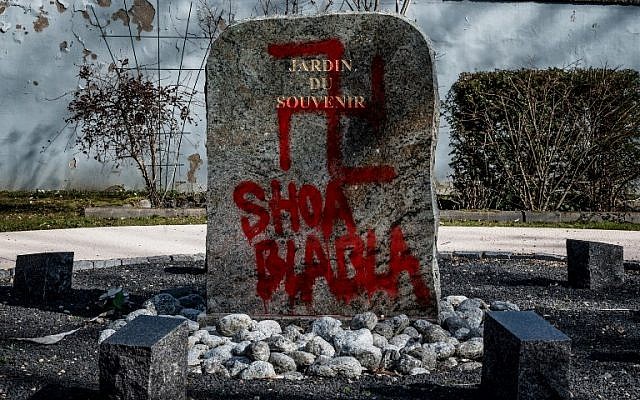 Israel, Jewish groups hail ‘significant step forward’ as Council of the EU adopts new declaration, which also calls for ‘new ways to remember the Holocaust in a meaningful way’

A key decision-making body of the European Union on Wednesday adopted a resolution calling for a “strong and systematic judicial response” to rising anti-Semitism, drawing applause from the Israeli government and Jewish advocacy groups.

The four-page document approved by the Council of the EU urges harsher consequences for online hate crimes and calls on the bloc’s member states to adopt the anti-Semitism definition of the International Holocaust Remembrance Alliance (IHRA), which includes obsessive criticism of Israel.

The document, officially called the “Council Declaration on mainstreaming the fight against anti-Semitism across policy-areas,” cited EU-funded studies showing that Jew-hatred “in all its forms” is on the rise across the continent.

“The increase in threats to Jewish persons in Europe including the resurgence of conspiracy myths, public expressions of anti-Semitism, especially in the context of the COVID-19 pandemic, and an increase in anti-Semitic incidents and hate crime is a cause of great concern,” the conclusions read. “Ensuring the security of Jewish communities and institutions must therefore be given utmost priority in all member states.”

Actions envisioned include dialogue with Jewish communities and improving security for Jewish institutions. “Crimes committed online should be punished just as crimes offline are and must be adequately addressed by means of effective prosecution and other measures,” demands the declaration, which was spearheaded during Germany’s presidency of the Council.

“Illegal hate speech and terrorist content online must be removed promptly and consistently by internet service providers, in accordance with the relevant legal and non-legal framework. A strong and systematic judicial response to anti-Semitic acts is necessary.”

Education about the Holocaust, anti-Semitism and Jewish life remains one of the most important tools to prevent anti-Semitic prejudices

The Israeli Foreign Ministry released a statement parising the declaration.

“We also welcome the attention paid to the obligation of countries to fight antisemitism and to protect Jewish life in Europe, including through legal means. The declaration reflects a decisive position against the phenomenon of antisemitism, including both physical attacks as well as antisemitism in the digital space,” it said in a statement.

“We hope and expect that the declaration will assist European Union member states in combating the phenomenon of antisemitism, particularly during the current period where the number of antisemitic incidents in Europe is rising.”

Israeli Diaspora Affairs Minister Omer Yankelevich took to Twitter to thank the EU “for recognizing the threat of rising antisemitism to Jewish life and for their deep commitment to ensure its future. I hope European nations will take the necessary steps to implement this important declaration. My office will do all in our power to assist.”

The World Jewish Congress said it had pushed the EU for tougher measures against anti-Semitism for years, welcoming Wednesday’s Council conclusions as a “critical step.”

“The adoption of this declaration by the Council of the European Union demonstrates that Germany in its Council presidency and the EU leadership as a whole recognize the danger that antisemitism and hate create and the threat to society and safety when left unaddressed,” WJC president Ronald S. Lauder said in a statement.

“This declaration is a significant step forward in making Europe a better place for Jews,” he added.

“The responsibility now falls on member states to apply the policies and understanding laid out by the European Union in each of their countries, to ensure that the scourge of anti-Semitism is dealt with, that perpetrators are prosecuted to the greatest extent of the law, and that our next generation learns that hatred is unacceptable.”

The European Jewish Congress, too, hailed the declaration. “This is an important decision, one that appreciates the sad growth of antisemitism and how it not only targets Jews, which is corrosive for any society,” the group’s head, Moshe Kantor, said. “The EU firmly states that anti-Semitism is against European values and commits itself to a holistic program to eradicate it from the continent.”

Elnet, a nonprofit working to improve Israel-Europe relations, also welcomed the Council’s declaration as “an encouraging signal that the fight against hate speech and discrimination against Jews remains high on the EU agenda,” the group’s Brussels-based Matthijs Schüssler told The Times of Israel on Wednesday.

He highlighted the document’s recommendation on EU member states to adopt the IHRA working definition of anti-Semitism, noting that it has been recognized as an important tool to combat all forms of anti-Jewish prejudice and racism, “including applying double standards to the only Jewish state,” and echoed the Council’s call on the remaining countries to follow suit.

The Council of the EU – not to be confused with the European Council – is considered an “essential EU decision-maker.” It represents the governments of the bloc’s 27 member states and it’s where ministers meet to adopt laws and coordinate policies.

The conclusions adopted Wednesday, which are expected to be formally confirmed by the European Council during its meeting next week in Brussels, demand that all expressions of racism and xenophobia, including on the internet, must be fought by means of criminal law.

“Furthermore, judicial and law enforcement authorities must be adequately equipped and trained for their action against such crimes, including for criminal investigations and victim support,” the document reads.

EU member states agree to “mainstream the prevention and countering of anti-Semitism in all its forms,” it goes on. “The fight against anti-Semitism is a cross-cutting issue involving various levels of government and policies at local, national and European level. Awareness of anti-Semitism therefore needs to be increased across policies and responsibilities.”

The Council’s conclusions also stresses the importance of finding “new ways to remember the Holocaust in a meaningful way” to keep the memory alive.

“Education about the Holocaust, anti-Semitism and Jewish life remains one of the most important tools to prevent anti-Semitic prejudices. Sharing good practices to foster media literacy and awareness of conspiracy myths – not only, but especially, among young people – will be key.”