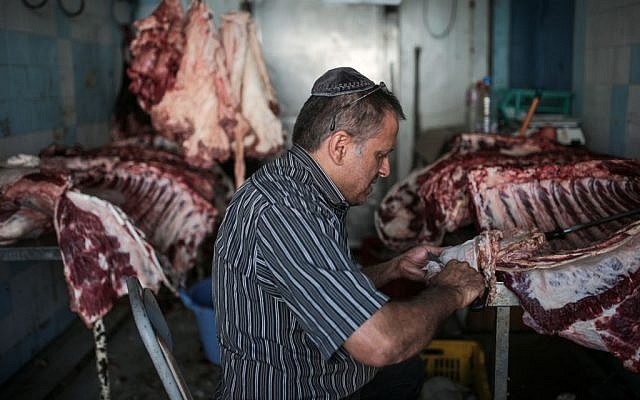 European Jewish groups decry ruling that okays outlawing the slaughter of animals that haven’t been stunned, say it puts ‘animal welfare above… freedom of religion’

The European Court of Justice ruled Thursday that authorities can order that animals be stunned before slaughter in a case that Jewish and Muslim groups warned could curb religious freedom.

The court backed a regulation imposed in the Flemish region of Belgium to ban the slaughter of livestock that have not been stunned, on animal rights grounds.

“The court concludes that the measures contained in the decree allow a fair balance to be struck between the importance attached to animal welfare and the freedom of Jewish and Muslim believers to manifest their religion,” the ruling said.

Belgium’s Flanders regional government issued the order in 2017, which took effect in 2019, that abattoirs must stun livestock before slaughtering them.

The argument was made that this would “reduce their suffering” but it was widely perceived as a measure targeted at the Muslim halal tradition, and one that also effectively banned the Jewish kosher ritual.

Animal rights activists had pushed for the ban. Both kosher and halal ritual slaughter requires livestock to be conscious when their throats are slit.

But Jewish and Muslim groups had argued the measure was an attack on their traditions and rituals and urged the European court to prioritize religious liberty.

Thursday’s ruling was swiftly condemned by Jewish groups, with the head of the European Jewish Congress saying it “severely undermined” the right to perform Jewish religious practices.

He said the EJC would fight the court decision.

“Europe’s Jewish communities will not rest until our fundamental rights are asserted and protected under the full weight of European law,” Kantor said.

The ruling was also denounced by the Belgian Federation of Jewish Organizations and the European Jewish Association.

“This is a sad day for European Jewry. For decades now, as animal rights have come into vogue, Kosher slaughter has come under relentless attack, and subject to repeated attempts to ban it,” EJA chairman Rabbi Menachem Margolin said in a statement.

“What today’s ruling does is put animal welfare above the fundamental right of freedom of religion. Simply put, beast takes preference over man,” he said.