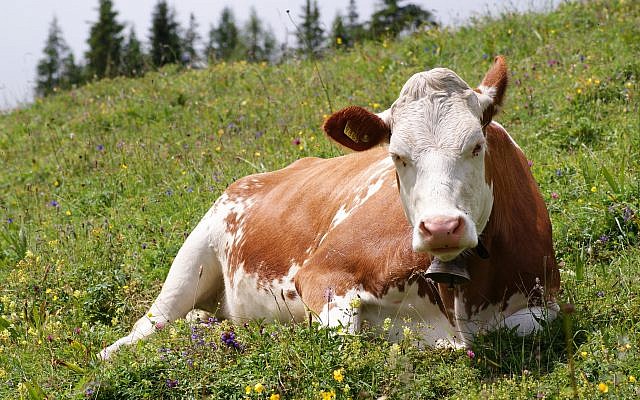 Shimon Cohen of Shechita UK said the decision was ‘very significant to the UK Jewish community, even post Brexit’

Jewish leaders have reacted with dismay after Europe’s highest court upheld a Belgian ban on non-stun slaughter, with some calling the ruling “absurd”.

In an ominous warning, shechita (kosher slaughter) defenders in the UK said it would have an impact on British Jews too, even after Britain leaves the EU.

The European Court of Justice (ECJ) decision, announced on Thursday, relates to a ban implemented in the regions of Flanders and Wallonia last year. Belgium’s constitutional court had already sent it to the EU’s top court in Luxembourg.

The ruling allows other EU states to insist that animals are stunned before slaughter, including for halal and kosher meat, even though stunning before slaughtering is forbidden under Jewish and Muslim law.

Jewish leaders said it was “a fundamental attack on the basic rights of Jewish religious expression and practice” and “a disgrace”.

Announcing its verdict, the ECJ said: “In order to promote animal welfare in the context of ritual slaughter, EU Member States may require a reversible stunning procedure which cannot result in the animal’s death.”

He said: “It is the first time a Court of the ECJ’s standing has upheld a ban on religious slaughter and will be taken seriously internationally. We are disappointed with the ruling and will be working to understand the long-term implications.”

European Jewish Congress president Moshe Kantor said: “The right to practice our faith and customs, one which we have been assured over many years was granted under European law, has been severely undermined by this decision.”

Representatives from the Coordinating Committee of Jewish Organisations in Belgium (CCOJB) have been working with their Muslim counterparts to overturn the ban since it was announced by Flemish lawmakers in July 2017.

However, Rabbi Pinchas Goldschmidt, president of the Conference of European Rabbis, said its effects “will be felt by Jewish communities across the continent”.

He said: “The bans have already had a devastating impact on the Belgian Jewish community, causing supply shortages during the pandemic, and we are all very aware of the precedent this sets which challenges our rights to practise our religion.”

Flanders and Wallonia are far from the only European regions in which lawmakers have sought to ban a practice most veterinary associations deem cruel, with moves to do likewise in Wales progressed as recently as last year.

In this week’s ruling, the ECJ acknowledged the difficulty of balancing freedom of religion, as guaranteed by Article 10 of the EU’s Charter of Fundamental Rights, and animal welfare, as set out in Article 13 of the TFEU, signed in 1957, and one of two treaties forming the EU’s constitutional basis.

Daniel Schwammenthal of the AJC Transatlantic Institute, based in Brussels, said it “effectively bans ritual and kosher slaughter,” adding: “We are shocked by the decision, which is nothing less than a frontal assault on the basic rights and religious freedoms of Jews and Muslims in Europe.

“Within living memory of the Holocaust, a European court not only bans a core Jewish ritual but potentially Jewish life altogether in Europe.”

Jewish leaders were left surprised by the verdict because in September, Advocate General to the ECJ Gerard Hogan called on it to “respect the deeply held religious beliefs of adherents to the Muslim and Jewish faiths by allowing for the ritual slaughter of animals in this manner”.

Yohan Benizri, president of CCOJB, said the decision to ignore Hogan’s advice was “not only disappointing but undemocratic”, adding: “No democracy can exist when its citizens are denied basic human and civil rights. We plan to pursue every legal recourse to right this wrong.”