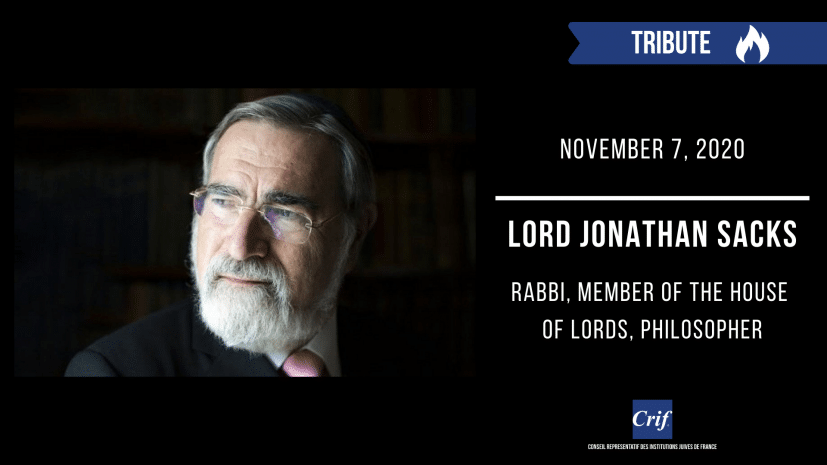 The Crif expresses its deepest condolences to the family of Rabbi Lord Jonathan Sacks. The former Chief Rabbi of the United Hebrew Congregations of the Commonwealth of Nations passed away on Saturday, November 7.

Upon the announcement of his death on November 7th, many personalities and institutions from around the world paid tribute to Rabbi Lord Jonathan Sacks.

“He resolutely defended Judaism, the Jewish people and the State of Israel while demonstrating an unwavering commitment to compassion and tolerance in Jewish thought and practice,” said Moshe Kantor, president of the European Jewish Congress.

“A theologian of extraordinary intellectual depth and moral conviction, Rabbi Sacks was a fascinating speaker and brilliant author who brought the timeless teachings of the Jewish scriptures to Jews and non-Jews alike, fusing Jewish tradition with thought. modern. His writings, including – and perhaps most importantly – his commentaries on the Torah will be cherished by future generations. ” expressed Ronald Lauder, president of the World Jewish Congress.

In tribute, we invite you to (re) discover three key moments of teachings from Lord Jonathan Sacks:

A TED talk given in 2017 on the means at our disposal to move into the era of “All of us, all together”. He questions himself and questions his audience: “Is there something we can do, each of us, to face the future without fear?”