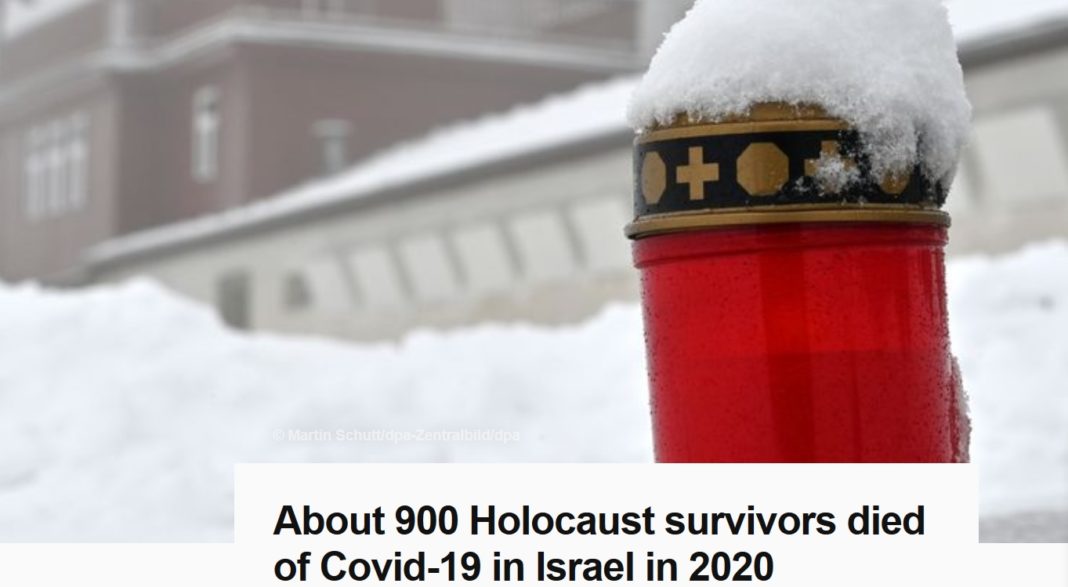 About 900 Holocaust survivors in Israel died of the coronavirus in 2020, the Central Bureau of Statistics (CBS) said Tuesday, a day ahead of International Holocaust Remembrance Day.

That is 17 per cent of the number of survivors who were infected with the virus, according to CBS.

There was a total of 179,600 people in Israel who are recognized as Holocaust survivors by the Holocaust Survivors’ Rights Authority towards the end of 2020. Some 17,000 died during the course of the year.

All Holocaust survivors are aged 75 and over, and about 17 per cent of them are over the age of 90.

In total, there have been 4,493 coronavirus-related deaths in Israel.

Moshe Kantor, president of the European Jewish Congress, on Monday called on the member states of the European Union to ensure that Holocaust survivors have access to a Covid-19 vaccine as soon as possible. He made the comment at an online International Holocaust Remembrance Day event, co-hosted with the European Commission.

“Throughout their lives, they have shown mighty strength of spirit, but in the current crisis, many have sadly died alone and in pain, or are now fighting for their lives, and many others are suffering from extreme isolation,” Kantor said. “We have a duty to survivors, to ensure that they are able to live their last years in dignity, without fear, and in the company of their loved ones.”

“76 years since the liberation of Auschwitz-Birkenau, the greatest symbol of Nazi evil, we stand united in our shared commitment to preserving the memory of the Holocaust and fighting antisemitism,” they said.

“We pay tribute to the survivors, who represent the triumph of humanity over hate and whose inner strength inspires us all,” the statement said. “We renew our promise that their legacies will live on and that their testimonies will forever stand as a wall against those who would deny the past.”

A photographic exhibition from the Willy-Brandt Haus of portraits of Holocaust survivors around the world is on display at the President’s Residence in Jerusalem and the German Museum of Holocaust Survivors as part of an initiative by the Lonka Project.

As part of the initiative, over 250 of the world’s leading photographers from some 35 countries have donated their works which seek to immortalize Holocaust survivors.

The Lonka Project is named after Dr. Eleonora (Lonka) Nass, who survived five concentration camps and died in Israel in 2018.

The Yad Vashem Holocaust memorial in Jerusalem is set to hold a range of online events on Wednesday to mark Holocaust Remembrance Day, including an annual symposium which Rivlin will address.

The Saddest of Anniversaries: 76 Years After Auschwitz Was Liberated, Thousands Around the World Mark the Day in Private as Covid-19 Prevents the Usual...

0
The world is marking Holocaust Memorial Day in the midst of the pandemic today as memorial events take place online and vulnerable survivors shield...
Read more