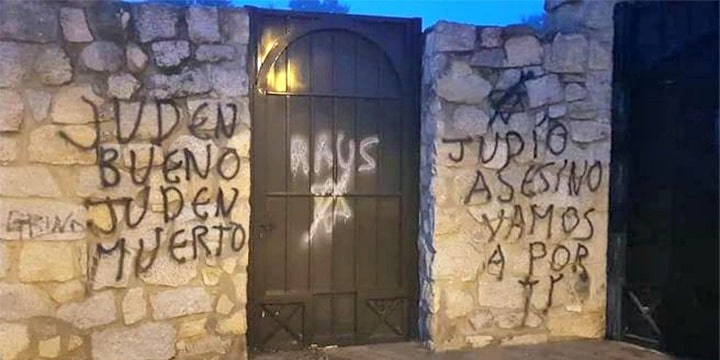 A dip in acts of physical and verbal aggression towards Jews worldwide during the COVID-19 lockdowns of 2020 was exceeded by the “skyrocketing” spread of antisemitic tropes on social media as well as increased vandalism of Jewish sites, a new report from Tel Aviv University disclosed on Wednesday.

The annual antisemitism report published by Tel Aviv University’s Kantor Center in cooperation with the European Jewish Congress (EJC) observed that while “the total worldwide number of violent antisemitic events decreased from 456 (2019) to 371 (2020) … a 20 percent increase was observed in desecrations of synagogues, graveyards and Holocaust memorials (which were closed or unguarded due to the lockdown and therefore easy prey for antisemitic vandalism).”

The report also highlighted “new phenomena developed on the internet, such as zoom bombing and the darknet, which are difficult to quantify.”

On the issue of online antisemitism, the report noted that moves by social media giants like Facebook to curb antisemitic and racist postings had led to a 50 percent drop in anti-Jewish invective since 2018. During 2020, one million antisemitic statements were recorded by Israel’s Ministry of Diaspora Affairs, with 500,000 posts written in Arabic and a further 250,000 in French.

However, the report continued, there was a “downside to this improvement: the decrease of antisemitism in the leading networks led to a strengthening of undercurrents — namely, the darknet.”

The report posited the possibility that “users, particularly in the US and UK, came to regard the new antisemitism in the open networks, including antisemitic descriptions of Israel, emphasis on Zionist conspiracies and discussions on the BDS, as more political and not truly antisemitic — and thus more legitimate than classic antisemitism, and certainly more than support for Nazi ideology or the denial or distortion of the Holocaust, both of which have risen over the past year.”

Prof. Dina Porat, the head of the Kantor Center, emphasized the resurgence of classic antisemitic themes in tandem with the pandemic’s spread.

“The coronavirus pandemic and the resulting reality dictated both the nature and extent of antisemitism in 2020, which was an unusually tense and turbulent year all over the world,” Porat said in a statement. “Prejudice, superstition, primordial emotions, and bizarre theories surfaced on the scene, and manifestations of antisemitism, both verbal and visual, were vicious and outrageous. Blaming the Jews and Israelis for developing and spreading the coronavirus (or ‘Judeovirus’), was the main motif in this year’s antisemitic manifestations. This notion is rooted in a deep fear of the Jew/Israeli as a spreader of disease in both the past and present.”