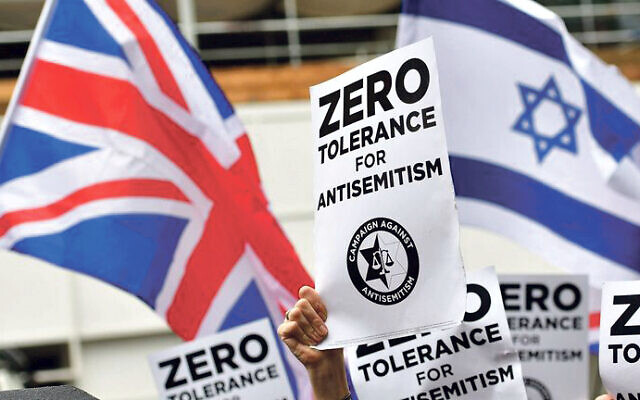 Publication of three-year study suggests initiative which would mean around £4.6bn from the UK treasury going towards tackling Jew-hatred annually

The European Jewish Congress has backed a report saying all countries should commit a fixed annual proportion of 0.02 percent of their Gross Domestic Product to the fight against antisemitism.

Based on the UK government’s most recent economic figures, this would equate to around £4.6 billion from the Treasury every year, or about £70 per person annually.

It follows the publication this week of a three-year study, presented to the Republic of Austria on Tuesday, in which the continent’s most senior Jewish leaders also called for more laws to make antisemitism illegal across Europe, and for these laws to be embedded within states’ constitutions.

In ‘An End to Antisemitism,’ a selection of academics say the fight against Jew hatred by governments should include a raft of measures, saying: “Each country should fund the fight… with at least in excess of 0.02 percent of its Gross Domestic Product [GDP] annually.”

They added that “the common implicit expectation that Jewish donors or Jewish foundations should fund efforts to research and combat antisemitism is in itself part of structural antisemitism”.

The authors said this new money would pay for the security of Jewish communities and institutions, surveys of antisemitic attitudes, monitoring of antisemitic incidents, national hotlines, the removal of antisemitic content online, the increased study of antisemitism, cultural exchange programmes, and better online information about Judaism.

The giant three-year project began in Jerusalem in February 2018 as a collaboration between the University of Vienna, Tel Aviv University, and New York University, with contributions from dozens of other international study centres in Europe, the United States, Canada, and Israel, including eight from the UK and Ireland.

Its other recommendations include the more widespread adoption of the International Holocaust Remembrance Alliance definition of antisemitism, the appointment of special envoys, and the “naming and shaming of anyone who holds antisemitic views”.

The report’s authors include a more contentious recommendation that European governments should “make Boycott, Divestment and Sanctions [BDS] illegal” because the anti-Israel movement “can lead to human rights issues”.

Commission President Ursula von der Leyen said the bloc was “committing to fostering Jewish life in Europe in all its diversity seeing Jewish...
Read more
In the News

Swedish Prime Minister Stefan Löfven: “Anti-Semitism differs from other forms of racism; is in itself a conspiracy theory based on notions of Jewish powers...
Read more