Antisemitism, the Pope, “Let Us Fight the Virus of Indifference” 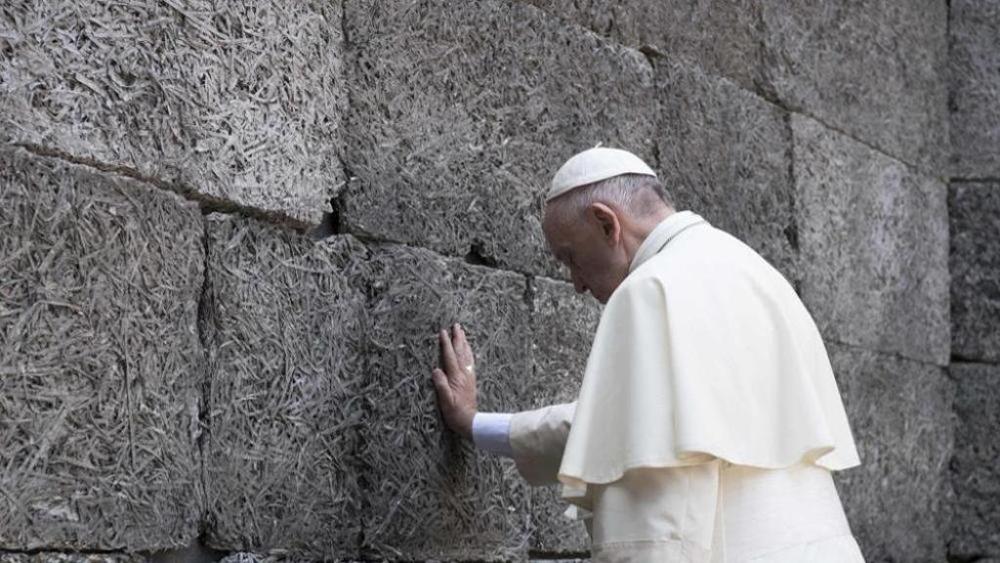 At the international conference OSCE hosted in Italy, the pope: the vaccine is our memory. And he recalls the “disturbing silence” that he felt when he visited Auschwitz, a silence “that leaves room only for tears, prayer and for the begging of forgiveness”

“Indifference is a virus that is dangerously contagious in our time, a time when we are ever more connected with others, but are increasingly less attentive to others”. Pope Francis said this to the participants at a conference on anti-Semitism, recalling the “disturbing silence” that he perceived when he visited the Auschwitz lager, a silence “that leaves space only for tears, for prayer and for the begging of forgiveness”. A few days after Memory Day, Francis points out that the “vaccine” is memory which is the “key to accessing the future” and how “it is our responsibility to hand it on in a dignified way to young generations”.

The international conference “on the responsibility of States, Institutions and Individuals to fight against Anti-Semitism and crimes related to anti-Semitic hate”, is hosted today in Rome by the Italian Ministry of Foreign Affairs as he is currently the rotating president of the OSCE (Organization of Security and Cooperation in Europe).

“I would like to emphasize one word” the Pope said, “Responsibility. We are responsible when we are able to respond. It is not merely a question of analyzing the causes of violence and refuting their perverse reasoning, but of being actively prepared to respond to them. Thus, the enemy against which we fight is not only hatred in all of its forms, but even more fundamentally, indifference; for it is indifference that paralyzes and impedes us from doing what is right even when we know that it is right”.

“I do not grow tired of repeating that indifference is a virus that is dangerously contagious in our time, a time when we are ever more connected with others, but are increasingly less attentive to others. And yet the global context should help us understand that none of us is an island and none will have a future of peace without one that is worthy for all. The Book of Genesis helps us to understand that indifference is an insidious evil crouching at man’s door. It is the subject of debate between the creature and his Creator at the beginning of history, as soon as the Creator asks Cain: “Where is your brother?” But Cain, who has just killed his brother, does not reply to the question, does not explain “where”. On the contrary, he protests that he is autonomous: “Am I my brother’s keeper?”. His brother does not interest him: here is the root of perversity, the root of death that produces desperation and silence”.

“I recall the roar of the deafening silence I sensed two years ago in Auschwitz-Birkenau: a disturbing silence that leaves space only for tears, for prayer and for the begging of forgiveness” the Pope said.

Then Bergoglio asked, “Faced with the virus of indifference, the root of hatred, what vaccine can we administer? The Book of Deuteronomy comes to our aid. After a long journey through the desert, Moses addressed a basic counsel to the Chosen People: “Remember your whole journey”. To the people longing for the promised future, wisdom was suggesting one looks back, turning one’s glance to the steps already completed. And Moses did not simply say, “think of the journey”, but remember, or bring alive; do not let the past die. Remember, that is, “return with your heart”: do not only form the memory in your mind, but in the depths of your soul, with your whole being. And do not form a memory only of what you like, but of “your whole journey”.

“We have just celebrated International Holocaust Remembrance Day” Francis said. “In order to recover our humanity, to recover our human understanding of reality and to overcome so many deplorable forms of apathy towards our neighbour, we need this memory, this capacity to involve ourselves together in remembering. Memory is the key to accessing the future, and it is our responsibility to hand it on in a dignified way to young generations”.

The Pope mentioned the document published in 1998 by the Commission for Religious Relations with the Jews and, in particular, what Saint John Paul II wrote, who hoped that “would enable memory to play its necessary part in the process of shaping a future in which the unspeakable iniquity of the Shoah will never again be possible”. “To build our history – the Argentine Pontiff said – which will either be together or will not be at all, we need a common memory, living and faithful, that should not remain imprisoned in resentment but, though riven by the night of pain, should open up to the hope of a new dawn. The Church desires to extend her hand. She wishes to remember and to walk together. On this journey, “the Church, mindful of the patrimony she shares with the Jews and moved not by political reasons but by the Gospel’s spiritual love, decries hatred, persecutions, displays of anti-Semitism, directed against Jews at any time and by anyone”, the Pope continued quoting from Nostra Aetate.

“Dear friends – concluded the Pope – may we help one another in turn to grow a culture of responsibility, of memory and of closeness, and to establish an alliance against indifference, against every form of indifference. The potentialities of information will certainly be of assistance; even more important will be those of formation. We need urgently to educate young generations to become actively involved in the struggle against hatred and discrimination, but also in the overcoming of conflicting positions in the past, and never to grow tired of seeking the other. Indeed, to prepare a truly human future, rejecting evil is not enough; we need to build the common good together”.

The international conference hosted by Italy is organized with the support of Odihr (Office for Democratic Institutions and Human Rights) and in collaboration with the Union of Italian Jewish Communities and the Foundation Centre for Contemporary Jewish Documentation. Among the participants were the President of the World Jewish Congress, Ronald Lauder; the President of the European Jewish Congress, Moshe Kantor; the chairman of the Yad Vashem committee, Rabbi Meir Israel Lau; the President of the Union of Jewish Communities in Italy (Ucei), Noemi Di Segni, the founder of the community of Sant’ Egidio, Andrea Riccardi, and the director of La Stampa, Maurizio Molinari.

Foreign Minister Angelino Alfano said he was “deeply touched by the words of His Holiness Pope Francis on the need for a growing culture of responsibility, of memory and of closeness so to create an alliance against indifference”. In the last year – the Italian Presidency of Osce underlines – “anti-Semitic demonstrations have significantly increased throughout Europe and in general in the Osce countries, fueled by social tensions, the evolution of the situation in the Middle East and the role played by propaganda on the Internet. The conference in Rome on anti-Semitism offers an opportunity to share views, experiences and best practices in order to identify cooperative approaches to tackling these common problems. It will also provide the platform to further develop dialogue and cooperation between governments, institutions and individuals”.