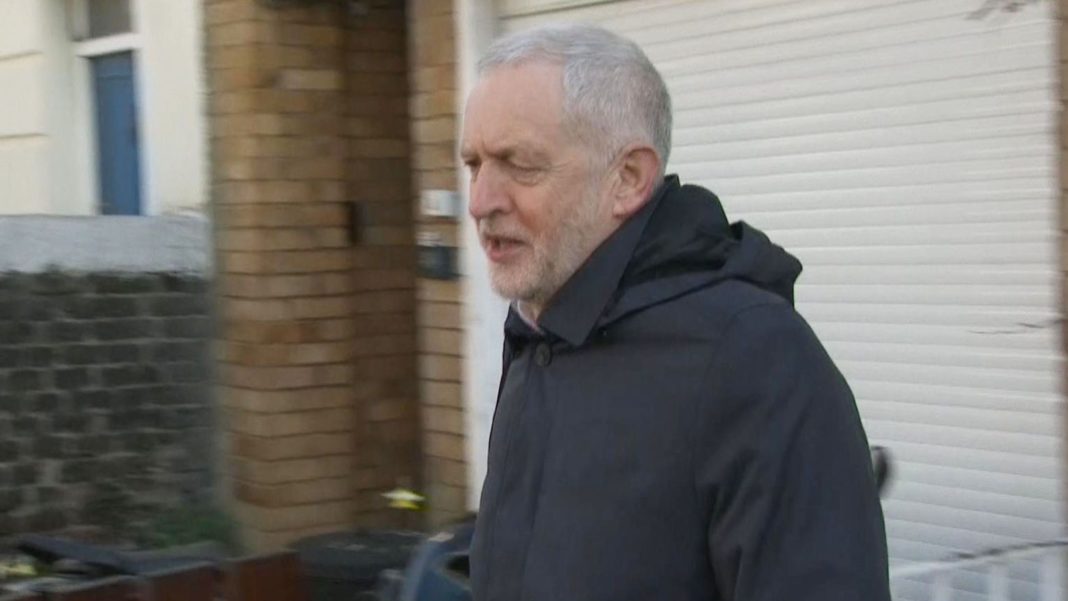 Jeremy Corbyn is the “figurehead of an anti-Semitic political culture” and there are “no safe spaces” for British Jews within the Labour Party, a top community leader has warned.

An unprecedented protest by Jewish leaders will take place outside Parliament on Monday, putting Mr Corbyn under renewed pressure over allegations of Jew hatred within Labour.

Jewish community leaders will also deliver a letter to Labour MPs in advance of their weekly meeting.

It comes as Mr Corbyn saw an apology for “pockets of anti-Semitism” within Labour rejected by Jewish groups.

The Labour leader said he was “sincerely sorry for the pain which has been caused”, but has been told the “time for words is over”.

Jonathan Goldstein, the chairman of the Jewish Leadership Council (JLC), told the BBC’s Radio 4 Today programme: “We’ve reached the point as a community to say we’ve had enough of hearing Jeremy Corbyn opposes anti-Semitism whilst the mainstream majority of British Jews and their concerns are ignored by him and those he leads.”

He added: “The time for words is over and I think the time for action is now important. The reality is that there are no safe spaces online or in meetings for Jewish people within the Labour Party.

“Wherever we go, we are told we act on the instructions of Israel, that Rothschilds run the world, that ISIS is a fake front for Israel, that Zionists are the new Nazis. I’m afraid that it’s time for action rather than words.”

Claiming Jewish leaders have been “ignored” by the Labour leadership since Mr Corbyn’s election as party leader in 2015, Mr Goldstein continued: “This is the first time, in my lifetime, that the Jewish community has felt the need to take to the streets to campaign against the leader of a major political party.

“And, rightly or wrongly, Jeremy Corbyn is now the figurehead of an anti-Semitic political culture based upon obsessive hatred of Israel, conspiracy theories and fake news.

“That is doing great harm, not just to the Labour Party but to Britain in a wider sense.”

In his apology, Mr Corbyn revealed he will be meeting representatives from the Jewish community over the coming days, weeks and months to address anti-Semitism concerns.

But, Mr Goldstein insisted neither he nor the Board of Deputies of British Jews had received an invitation or have a meeting scheduled with the Labour leader.

The Campaign Against Anti-Semitism has also told Mr Corbyn it is “too late” for an apology.

The Labour leader declined to answer questions about anti-Semitism in Labour as he left his north London home on Monday.

In recent weeks, Mr Corbyn has faced questions over his past membership of a Facebook group in which anti-Semitic comments were made.

He has also apologised for previously expressing public support for an east London mural that had been ordered to be removed due to anti-Semitic imagery.

Mr Corbyn said he did not look “closely” at the image before commenting on it on Facebook.

On Monday, the Guido Fawkes website revealed the Labour leader is still a member of another Facebook group, titled “The Labour Party Supporter”, in which members have blamed the attempted murder of Sergei and Yulia Skripal in Salisbury on Israel or Islamic State.

In a joint open letter released on Sunday night, which appears to have prompted Mr Corbyn’s apology, the JLC and Board of Deputies expressed concern there is “a repeated institutional failure to properly address Jewish concerns and to tackle anti-Semitism” within Labour.

EJC president Moshe Kantor said: “It has been abundantly clear for too long that the Labour leadership under Jeremy Corbyn has at best a massive blind spot when it comes to antisemitism, and at worst openly encourages hatred and double-standards against Jews.

The protest outside Parliament will come ahead of a weekly meeting of the Parliamentary Labour Party (PLP), where Labour MPs may raise questions about Mr Corbyn’s support for the mural.

The Labour leader is not expected to attend the meeting.

Backbench Labour MPs Liz Kendall and Wes Streeting have revealed they will be attending Monday’s protest.

Mr Streeting said: “I protested Iraq, I led demonstrations over tuition fees, but I never imagined that there would be, or could be, a protest against anti-Semitism in the Labour Party.

“I hope every decent minded Labour MP, member and supporter joins this protest. I will be there, too.”

Meanwhile, a member of Mr Corbyn’s shadow cabinet has urged him to attend the PLP meeting.

“I think if members of the PLP have concerns then obviously he should be encouraged to go along and address that,” Valerie Vaz, shadow leader of the House of Commons, told the BBC.

In his apology, Mr Corbyn said: “Labour is an anti-racist party and I utterly condemn anti-Semitism, which is why as leader of the Labour Party I want to be clear that I will not tolerate any form of anti-Semitism that exists in and around our movement.

“We must stamp this out from our party and movement.”

However, journalist Paul Mason – one of Mr Corbyn’s strongest supporters – appeared to suggest “smears” are being directed at the Labour leader.

“It’s a different smear each week but with one aim – to stop radical change + social justice,” he wrote on Twitter.