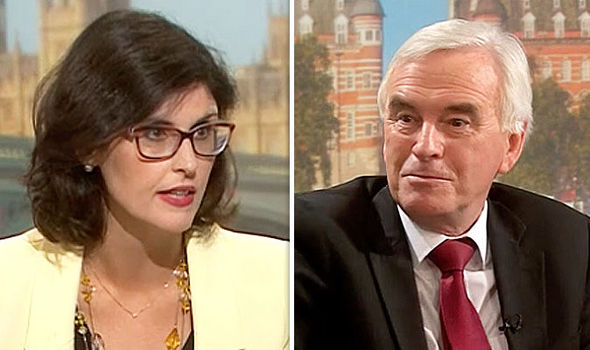 Mr McDonnell insisted the party had resolved its internal issues and that members of the Parliamentary Labour Party (PLP) only wanted to “get on with the job.”

But fellow BBC Politics Live panellist Layla Moran was quick to shut down the shadow Chancellor hinting at PLP members turning to other MPs to voice their complaints about the leadership.

The Lib Dem MP said: “Behind the scenes, that’s not the case in Parliament. I’m sorry.

“They come and talk to others.”

Mr McDonnell attempted to get Ms Moran to spill the names of those complaining but she refused to budge: “I’m not telling you, that’s not fair.”

Before Ms Moran interrupted the Labour Chancellor with her revelation, Mr McDonnell suggested Labour is recovering from the anti-Semitism row that rocked the party and MPs were now doing their job.

Mr Corbyn has been dogged by criticism for failing to deal with anti-Semitism since he became party leader in 2015, with many pointing to alleged anti-Semitic groups he has shared a platform with.

Mr McDonnell said: “The vast majority of the Parliamentary Labour Party just want to get on with the job. They stood on that manifesto, virtually all of them got increased majorities.

“There have been some differences over the anti-Semitism issue – we are coming out of that now – but the vast pocket of the PLP just want to get on with the job.”

But despite noting the decision, the European Jewish Congress (EJC) have called on Mr Corbyn to apologise for past comments and affiliating with “Jew-haters”, following the Labour ruling body’s decision to adopt the international definition of antisemitism.

The EJC said it “deeply regrets” the attached caveat which stated adopting the full definition will not impede freedom of speech on the subject of Israel.

President of the EJC Moshe Kantor said: “The full definition and examples were carefully drawn up in consultation with leading experts on anti-Semitism and place no restrictions on freedom of speech or legitimate criticism of Israel.”