What Is Anti-Semitism, What Has Labour’s Jeremy Corbyn Said And What Happened At The Crunch Nec Talks? 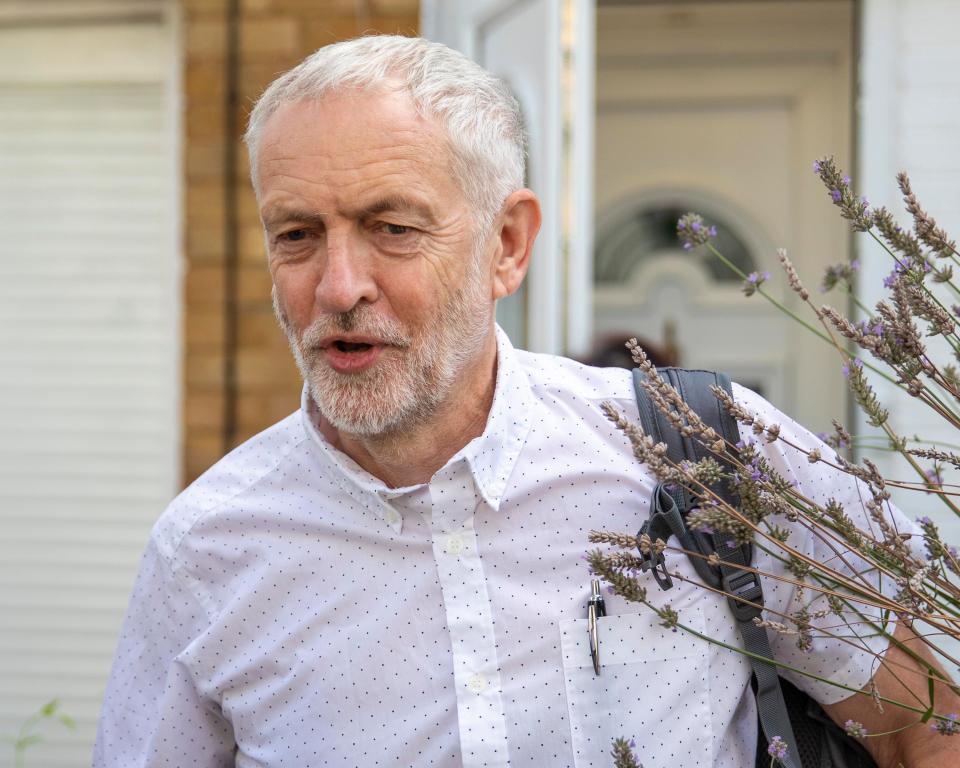 Jeremy Corbyn’s leadership has been dogged by an ongoing row over anti-Semitism in the Labour Party.

After the party’s ruling NEC held a crunch meeting on the issue, here’s what you need to know.

In basic terms anti-Semitism is hostility and prejudice directed against Jewish people.

Jews have faced persecution and discrimination for centuries across Europe.

The term anti-Semitism was first popularised in Germany in 1879, and specifically refers to hatred of Jews, not other Semitic people such as Arabs and Assyrians.

Anti-Semitism can take many forms from verbal abuse to physical attacks on either individuals or groups.

Often it takes more subtle forms than outright abuse – such as repeating myths about “Zionist conspiracies” and Jewish families said to control governments, finance and the media.

Zionist – a political term meaning one who supports the founding of the state of Israel – is sometimes used as a code word in attacks on Jewish people.

On the other hand, critics say some people are too quick to claim anti-Semitism as a shield against legitimate concerns about the policies of the Israeli government.

Anti-Semitism is generally viewed as a form of racism and it can constitute a hate crime.

In 2016 Prime Minister Theresa May said: “It is unacceptable that there is anti-Semitism in this country.

“There will be one definition of anti-Semitism – in essence, language or behaviour that displays hatred towards Jews because they are Jews – and anyone guilty of that will be called out on it.”

What is the Labour anti-Semitism row?

Since Mr Corbyn became leader in 2015, his leadership has been dogged by criticism that the party harbours virulently anti-Semitic activists and campaigners among the membership.

Labour has come under fire over its handling of disciplinary action against members accused of making anti-Semitic remarks – such as Corbyn ally Ken Livingstone who was suspended for two years for claiming Hitler was a Zionist.

One showed Israel’s outline superimposed on a map of the US under the headline: “Solution for Israel-Palestine conflict – relocate Israel into United States.”

She was suspended from the party but later reinstated to the fury of campaigners.

In 2018 the Labour party was urged to adopt the International Holocaust Remembrance Alliance’s (IHRA) definition of anti-Semitism, including the 11 examples of “contemporary anti-Semitism”.

The definition has been adopted by 31 countries as well as more than 130 UK councils, police forces, the Crown Prosecution Service and the judiciary.

But in July, Labour’s ruling National Executive Committee, which is stuffed with hard-left Corbyn supporters, voted to leave out some of the IHRA examples.

It sparked uproar, with Jewish newspapers joining forces to condemn Labour’s refusal to adopt in full the IHRA’s definition as “sinister”.

Corbyn faced a tough summer personally as his past comments came back to haunt him and veteran MP Margaret Hodge accused him of racism in a blistering attack in the Commons.

He was pictured holding a wreath, apparently in a ceremony honouring terrorists who murdered Israeli athletes at the Munich Olympics.

What happened at the Labour NEC meeting?

In September, NEC member and Corbyn ally Pete Willsman was re-elected to the ruling body despite a furious rant apparently accusing “Trump fanatics” of fabricating the anti-Semitism row.

The next day leftie activists cheered Mr Willsman as the NEC arrived for a crunch meeting aimed at bringing the crisis to an end.

After four hours of talks, committee members caved into pressure and finally voted to adopt the IHRA definition in full.

The change to the party’s code of conduct could see members expelled for comments that fall foul of the 11 examples.

But Mr Corbyn was branded “contemptible” after it emerged he tried to add a statement saying it’s OK to call Israel fundamentally racist.

Instead the NEC voted to add a softer “free speech clause” meant to allow legitimate debate on Palestine. It is likely to lead to further rows and claims the party is protecting anti-Semites.

Campaign group Labour Against Antisemitism said: “There can be no caveats, no conditions and no compromises with racism, and it is an ongoing disgrace that the Labour Party appears incapable of simply doing the right thing.”

A Labour spokesman said: “The NEC has today adopted all of the IHRA examples of anti-Semitism, in addition to the IHRA definition which Labour adopted in 2016, alongside a statement which ensures this will not in any way undermine freedom of expression on Israel or the rights of Palestinians.

“The NEC welcomed Jeremy Corbyn’s statement to the meeting about action against anti-Semitism, solidarity with the Jewish community and protection of Palestinian rights, as an important contribution to the consultation on Labour’s Code of Conduct.”

Marie van der Zyl, president of the Board of Deputies, said: “It is very long overdue and regrettable that Labour has wasted a whole summer trying to dictate to Jews what constitutes offence against us.

“However the adoption of the internationally recognised definition by itself, can only be the beginning. Action is what matters.”

Moshe Kantor, president of the European Jewish Congress, said: “It does the Labour Party no credit that even in adopting the IHRA definition in full, it still feels the need to condition its opposition to anti-Semitism on a foreign policy statement on issues three thousand miles away from Britain.”

How has the row unfolded?

February 2016: Labour MP John Mann calls a “full enquiry” into the Oxford University Labour branch after its club co-chairman resigned, saying many members “had some kind of problem with Jews”

April 2016: MP for Bradford West Naz Shah is accused of sharing anti-Semitic posts and is suspended from her role as John McDonnell’s parliamentary private secretary

Ex London Mayor Ken Livingstone makes comments on BBC Radio London defending Shah, apparently claiming Adolf Hitler was a Zionist. He was suspended from the party for a year

June 2016: Leading the enquiry, Shadow Attorney General Shami Chakrabarti concluded that while Labour was not overrun by anti-Semitism, there was an “occasionally toxic atmosphere”. She gave 20 recommendations to improve this

July 2016: Shah is reinstated and blames “ignorance” for her posts

September 2016: Corbyn appoints Ms Chakrabarti to the House of Lords, just three months after her enquiry

April 2017: Livingstone’s suspension is extended for a further year

September 2017: The Labour Party conference is marred by a number of allegations, including that pro-Corbyn activists applauded speakers who voiced anti-Semitic views

In the same month, Corbyn backs a party rule change put forward by the Jewish Labour movement, that takes a tougher line on anti-Semitic abuse

March 2018: Corbyn is accused of anti-Semitism after defending an East London mural depicting Jewish bankers playing monopoly on the backs of the poor

Corbyn-backing grassroots movement Momentum says Labour failed on anti-Semitism, and acknowledged the “upset and despair” of the Jewish community

May 2018: Oxford councillor Ben Lloyd-Shogbesan resigned from the Labour Party over a Facebook post comparing Israel to Nazi Germany.

Ken Livingstone resigned from the Labour Party amid accusations of anti-Semitism, two years after he was suspended.

July 18: Labour sparks outrage by launching disciplinary action against ex-minister Dame Margaret Hodge, the granddaughter of a Holocaust victim, who accused Mr Corbyn of racism in a House of Commons bust-up.

July 29: Labour MP Ian Austin, the son of adoptive Jewish parents, lashed out at Corbyn for “supporting and defending” extremists and anti-Semites.

August 11: A photograph emerged of Jeremy Corbyn holding a wreath at a ceremony in Tunisia in 2014 for terrorists who murdered 11 Israelis in the 1972 Munich massacre.

August 13: Jeremy Corbyn admitted he was “present” at the ceremony but not “involved” with the wreath actual wreath laying.

August 23: A recording emerges of Jeremy Corbyn accusing British Zionists of having “no sense of English irony”.

September 4: Mr Corbyn was warned he would split the party in two if he didn’t get a grip on anti-Semitism. The NEC caved into pressure and voted to adopt the IHRA definition in full. Video emerged of Corbyn heaping praise on Hamas and thanking them for dinner.

What has Jeremy Corbyn said?

Jeremy Corbyn insists he is “not an anti-Semite in any form”. His supporters say he has spent his career opposing racism.

But he had admitted Labour had a “real problem” with anti-Semitism within the party and vowed he would “root out” any abuse.

He told Labour anti-Semites: “You are not my supporters and have no place in our movement.”

His comments came after a joint front page article by three Jewish newspapers said a Labour government under Corbyn would pose an “existential threat to Jewish life”.

Writing in The Guardian, he said: “I do not for one moment accept that a Labour government would represent any kind of threat, let alone an ‘existential threat’ to Jewish life in Britain, as three Jewish newspapers recently claimed.

“That is the kind of overheated rhetoric that can surface during emotional political debates.

“But I do acknowledge there is a real problem that Labour is working to overcome.

“And I accept that, if any part of our national community feels threatened, anxious or vulnerable, not only must that be taken at face value but we must all ensure those fears are put to rest.”

In response to a racist mural, which he had defended in a Facebook post in 2012, he said: “I sincerely regret that I did not look more closely at the image I was commenting on, the contents of which are deeply disturbing and anti-Semitic.

“The defence of free speech cannot be used as a justification for the promotion of anti-Semitism in any form. That is a view I’ve always held.”

On launching a review into racism and anti-Semitism in the party, he wrote on his website: “Labour is an anti-racist party to its core and has a long and proud history of standing against racism, including anti-Semitism.

“I have campaigned against racism all my life and the Jewish community has been at the heart of the Labour party and progressive politics in Britain for more than a hundred years.

“There is no place for anti-Semitism or any form of racism in the Labour party, or anywhere in society, and we will make sure that our party is a welcoming home to members of all communities.”