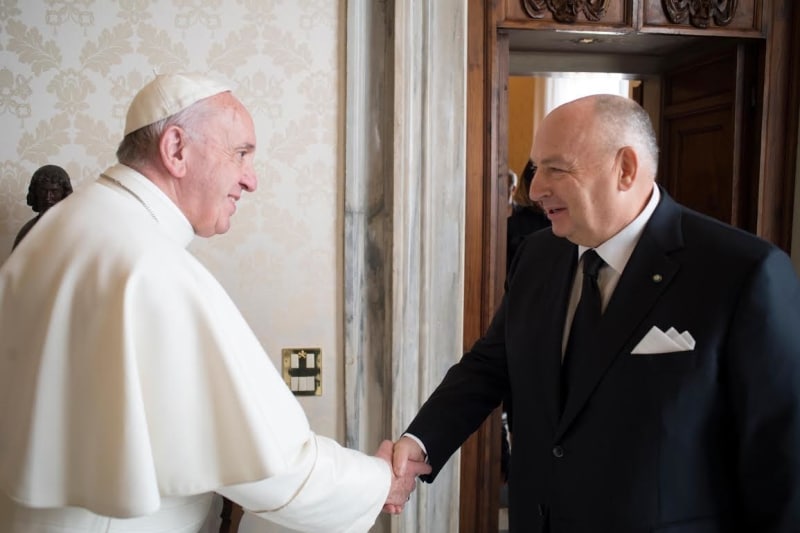 In the week when Moshe Kantor met the Pope and lead Holocaust Memorial Day proceedings at the European Parliament, his message of tolerance is more important than ever

George Orwell once said that ‘Nationalism is power-hunger tempered by self-deception.’ In our increasingly connected world, isolationist politics is becoming the norm. Across the world there are echoes of fascism that we never thought we would hear again. As the European Jewish Congress marks Holocaust Memorial Day, they have stressed the need to be aware of what extreme right politics really offers.

For years commentators felt that as communication sped up and diversified, travel became easier and information was more readily accessible, the planet would be more united. Basic values such as democracy and liberalism were meant to increase and spread to new territories, as was trade with the EU, pioneering a model that everyone else could follow.

As Dr Moshe Kantor alluded to in his speech at the European Parliament last week, the public have said no. In the UK through Brexit, in Austria an extremist candidate came within two percent of becoming President and elections this year seem set to deliver right wing candidates in France and the Netherlands. That is without analysing the populist nationalism that is sweeping America with the election of President Trump. Trump although not an extremist, his policies unashamedly put his country first. Any thought of freedom of movement or companies moving abroad is being quashed by the idea that we’re better off ourselves, without any international support.

Speaking alongside The European Council On Tolerance And Reconciliation Chairman Tony Blair, Moshe Kantor stressed that minorities, perhaps above anyone else, need protection from extremists. History has proved this time and time again. The European Jewish Congress President made it clear that he feels it us up to our leaders to set the tone of the national and international debate and we rely on the strength of these leaders to steer us away from extremist politics. Unless they quash extremism, hatred and discrimination, then Moshe Kantor believes it will be common place in every supermarket, cafe and work place. When political statements develop these extremist undertones, hate crimes are sure to follow.

Moshe Kantor also explained that it is not just that extremist sentiment makes its way into leader’s rhetoric. Extremist dictators can be and often are elected into power. As Pope Francis, who meets with Moshe Kantor on HMD said recently, where there is a void in power, it will be filled and rarely for the good of society. In 1933, Germany needed a new direction, a new way of doing things. It was in financial ruin and many citizens were disenfranchised. It needed a pioneering leader who would offer something different. Adolf Hitler was the man who put his hand up and offered change. Hitler didn’t steal the power, his people voted for him. Extremist leaders got through using the full democratic process to power and there’s no certainty that another far right extremist won’t get into power again.

The truth is that in Europe today, few would argue that what we are seeing now is the rise of another Nazi party. But undoubtedly there are echoes of that time. Individuals, particular outside of the hubs of international power (London, Berlin, New York) feel isolated. They feel that they lack opportunity, be it socially or economically, and are turning to a new way for help. The political climate is changing and Moshe Kantor argues that people are looking for radical change. Instead of peace bringing cohesion, more access to information has meant that individuals are empowered to define their own facts.

At the event, the European Council on Tolerance and Reconciliation bestowed the 2016 Medal of Tolerance on Andrei Konchalovsky, Film director, producer and screenwriter, author of “Paradise” for which he is a winner of the Silver Lion for Best Director.

Looking forward, rather than looking at the parallels to the Holocaust, we would be better served learning its lessons and applying them to today, Moshe Kantor concludes. There is nothing wrong with populism or nationalism providing they are used for good. The scale of human tragedy is testament to the evil that can come from taking nationalism, backed by the public, to an extreme. We can fight extremism, HMD gives us the chance to reflect and ensure that these atrocities never happen again.