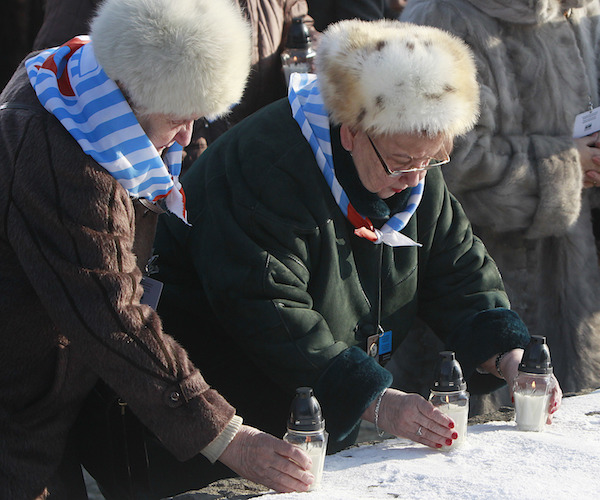 International Holocaust Remembrance Day was recognized Friday with a pilgrimage to the Auschwitz-Birkenau Memorial and Museum in Oswiecim, Poland, and statements from President Donald Trump and other leaders.

Survivors and supporters traveled to the former German Nazi concentration camp where 1.1 million people died during World War II, The Associated Press reported. Poland’s prime minster Beata Szydlo called the deaths there the “destruction of humanity” and the “ocean of lost lives and hopes,” according to the AP.

Dozens of Auschwitz survivors started Friday’s solemn commemorations by placing wreaths and flowers at the camp’s infamous execution wall on the 72nd anniversary of the its liberation by soldiers from the Soviet Union.

In Washington, D.C., Trump issued a statement pledging to defeat “the forces of evil,” according to the Washington Times.

“In the name of the perished, I pledge to do everything in my power throughout my presidency, and my life, to ensure that the forces of evil never again defeat the powers of good,” Trump said. “Together, we will make love and tolerance prevalent throughout the world.

“It is with a heavy heart and somber mind that we remember and honor the victims, survivors, heroes of the Holocaust. Yet, we know that in the darkest hours of humanity, light shines the brightest.‎ As we remember those who died, we are deeply grateful to those who risked their lives to save the innocent,” Trump continued.

Moshe Kantor, president of the European Jewish Congress, wrote for The Telegraph that the trauma of Holocaust survivors continues today and challenged everyone to prevent those crimes from repeating.

“Their suffering did not end with the liberation of the Nazi concentration camps like Auschwitz, the anniversary of which we will mark on Friday. More than seventy years on, coming to terms with the catastrophic loss and trauma they endured continues to be a daily test of their courage and resilience,” Kantor wrote for The Telegraph.

“… The public outpouring of grief and solidarity by people from all faiths and backgrounds after the recent terrorist attacks in Europe offered hope that our communities can work closer together.  It shows us we have the tools to be better. Now more than ever, let us be vigilant, and confront hatred when we see it,” he continued.

The United National declared Jan. 27 as International Holocaust Remembrance Day by resolution in 2005, urging members to develop educational programs to instill the memory of the tragedy in future generations to prevent genocide from occurring again, according to the United Nations website.