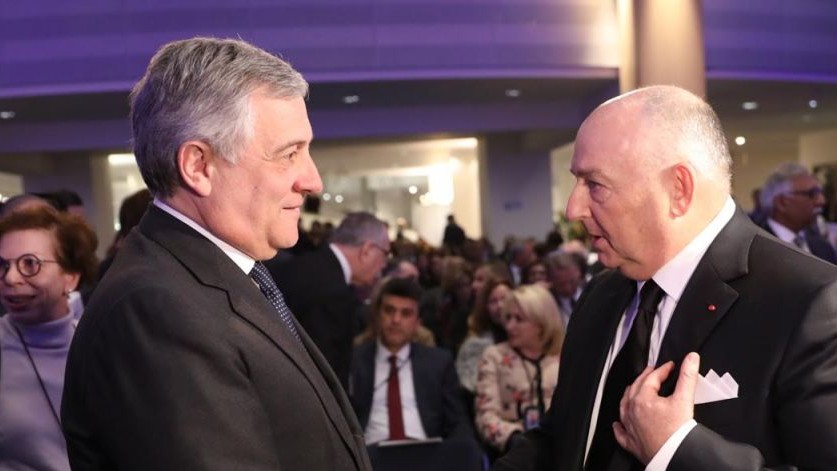 At Holocaust remembrance event, Antonio Tajani said ‘no Jew should be forced to leave Europe’; Tony Blair says ‘any sense of security is false’

The new president of the European Parliament on Wednesday urged calm over threats of resurgent anti-Semitism on the continent, calling on local Jewish communities to remain vigilant, but not fearful.

Speaking at an International Holocaust Remembrance Day event at its Brussels headquarters, Antonio Tajani, who replaced Martin Schulz as the European Parliament president last week, said “no Jew should be forced to leave Europe.”

However, other speakers at the event countered that Jewish fears were indeed justified, with former British prime minister Tony Blair warning that “any sense of security is false.”

Tajani, a veteran Italian politician, told attendees that “Europe has always been able to draw lessons” from its sordid past. “But unfortunately, anti-Semitism is not an issue of the past,” he added.

Singling out deadly terror attacks against Jews in Toulouse, Paris and Brussels, the EU parliament head condemned the violence “against Jewish people – only because they wear a kippah.”

“It is important to remain vigilant, but not to be afraid,” he said.

But as Tajani called for Jews to remain in Europe, the head of the European Jewish Congress said the future of European Jewry was increasingly in doubt.

Since the Holocaust, “two generations of Jews grew up believing they had a home in Europe, like anyone else. But that is now changing,” said Moshe Kantor.

“We European Jews want to remain in Europe and be loyal to it, as we have always been. Even after [the] Holocaust, we didn’t give up on Europe. But today, our young generations have doubts about their future on the continent,” he said.

“We count on Europe to continue to show its loyalty to us. Loyalty to the idea that Jews have a future here in Europe,” he said. But not “behind high walls, bulletproof glass” or the other safety measures European Jewish communities have been forced to adopt, he added.

“We cannot and should not live this way,” he said.

He also claimed that “every global tragedy begins with attacks on Jews.”

‘Any sense of security is false’

Blair said he was “ashamed” by a string of anti-Semitic attacks in London over the weekend, while warning that “any sense of security” among Jews in the face of rising anti-Jewish hatred was “false.”

“These acts of anti-Semitism are here and now, even in Britain in the last few days,” said the kippah-clad Blair – who serves as the chairman of the European Council on Tolerance and Reconciliation.

“I’m ashamed to say there have been such acts perpetrated against the Jewish community,” he said.

The former prime minister was referring at least three incidents in north London on Friday and Saturday – including a swastika-daubed brick hurled into a Jewish home, a family pelted with eggs, and swastika graffiti next to the words “Heil Hitler” and “F*** Jews” painted on a residential building.

‘Every global tragedy begins with attacks on the Jews’

Kantor, who according to The Independent was set to meet Pope Francis on Friday and warn about the threat of anti-Semitism in the face of rising populism in Europe, characterized the threat against the Jews in Europe as “unique.”

“Unlike any other minority, we are not just a target of the far-right but also of the far-left, as well as Islamists. Few would believe, but we have seen cooperation and coordination between these… groups on one issue only: Jews,” he said.

“This is the new anti-Semitism, without limits, without borders, with multiple identities and political homes,” he said.

Kantor was also appealing to the European Union to formally adopt a legal definition of anti-Semitism, specifically proposing that of the Berlin-based International Holocaust Remembrance Alliance. In a statement, Kantor called it “absurd” the 28-nation bloc has no such definition on the books.