Tony Blair ‘Ashamed’ Of State Of Anti-Semitic Attacks In London 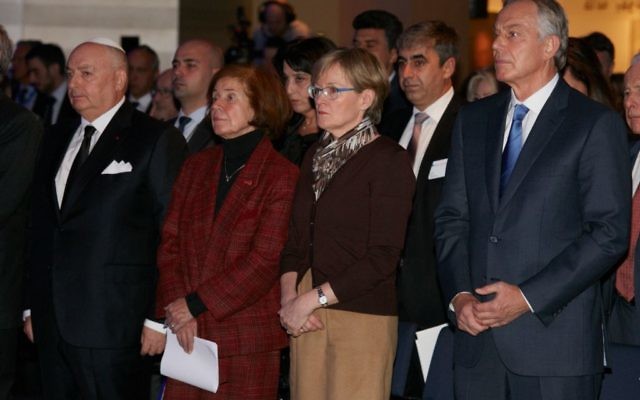 Tony Blair has said he is “ashamed” London’s Jewish community has been hit by a spate of anti-Semitic attacks in recent days as he implored the world not to be “bystanders” to hatred.

In front of an audience of parliamentarians and community leaders from around the continent, Blair insisted HMD demanded an active response as well as passive remembrance of the atrocities of the past – insisting the “Jewish spirit” he so admires would not settle for less.

“There is no small act of prejudice that does not enlarge the space for prejudice and hatred to flourish,” he said. “So we must stand against it from the beginning.

“We reaffirm that in this struggle there are no by-standers, to fail to act is in itself an action. That action has consequence and the consequence is what we saw in extreme when we watch the face of those who died in the holocaust. They died because of acts of hatred but they also die because of indifference, when indifference has no place in the face of prejudice.”

And after a weekend that saw several anti-Semitic incidents including a brick thrown through a window of a Jewish home in north London, he added: “Even in Britain in the last few days, I’m ashamed to say, there have been acts of hate against the Jewish community. Vigilance is a necessity and any sense of security is false.”

Tajani, attending one of his first public events in his new role, said that Remembering the “worst tragedy in European history” is “a crucial process if we don’t want to repeat the same errors.

“Remembering the past remind us Europe has always been able to draw lessons from it. 70 years on we are witnesses to the fact Europe been able to stand up to the past.”

But he warned anti-Semitism was not just a phenomenon of the past, referring to the murderous attacks in France and Belgium. Drawing on the words of Chief Rabbi Emeritus Lord Sacks, he insisted no Jew should feel forced to leave Europe.

But a warning came from EJC President Moshe Kantor, who said that, while Jews had not given up on Europe even after the Shoah, some young community members forced to observe their faith behind barber wire and fences were starting to have doubts about the future.

“European Jews found a life in Europe again. Two generations of Jews grew up believing they have a home in Europe like anyone else. But it’s changing . This event is an ideal time to acknowledge the challenges. Many Europeans have been murdered in terror attacks. Europe is in danger. We must not ask for whom the bell rings. The bell rings for all Europeans.”

He added: “Citizens of Europe should not forget every global tragedy begins with attacks against Jews.” With extremists planning decades in advance, he called for measures including legislation to counter the  threat.

The ceremony opened with a video highlighting the tragic story of artist Felix Nussbaum, who was among tens of thousands of Belgian Jews deported to Auschwitz. Speeches were interspersed with moving performances from the Moscow Virtuosi Chamber Orchestra.

It concluded with Kantor, on behalf of his European Council on Tolerance and Reconciliation, bestowing the Medal of Freedom on film director Andrei Konchalovsky, author of “Paradise” for which he is a winner of the Silver Lion for Best Director.

The British Jewish community was represented at the ceremony by Richard Verber, the Senior Vice President of the Board of Deputies of British Jews.

He said: “After a turbulent year for Jews in Europe it was reassuring to hear the new European Parliament President, Antonio Tajani, address the ceremony in one of his first public engagements since being elected, speaking forcefully about the need to ensure Europe protects is Jews and stamps out the scourge of modern antisemitism. The Board of Deputies looks forward to working with its European partners on this and the European Jewish Congress in particular.”