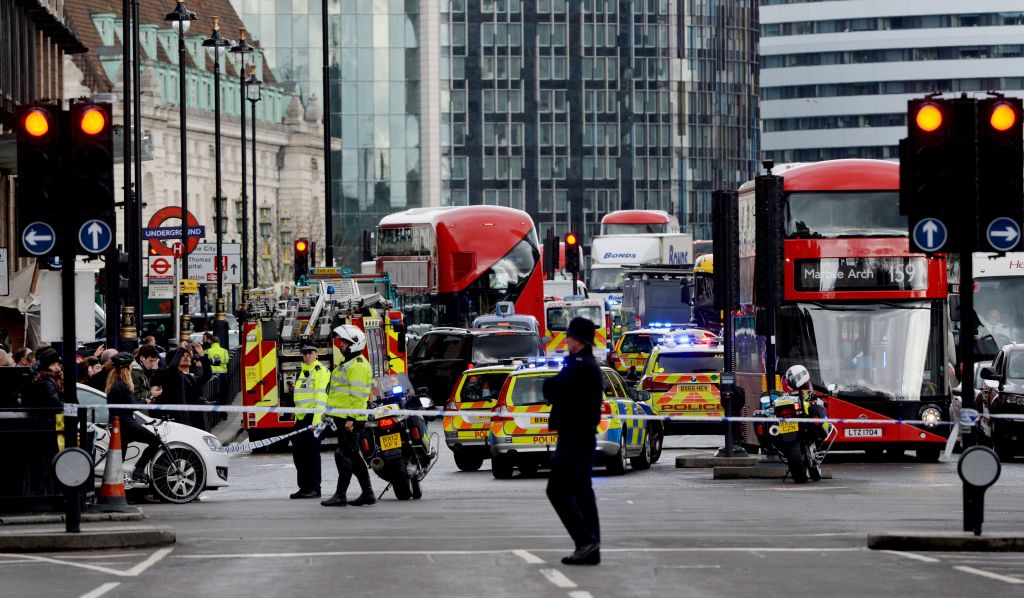 Jewish parliamentarians relive frightening experience of the attack, as community chiefs call for ‘vigilance’ and co-operation with authorities

Jewish parliamentarians relived the moment shooting began and they were told to “hit the ground” during an attack on Parliament on Wednesday afternoon, as community security chiefs appealed for “calm”.

Middle East Minister Tobias Ellwood, a former soldier, was hailed a hero for administering chest compressions, giving mouth-to-mouth resuscitation and improvising to stem the flow of blood from a policeman’s wounds until an air ambulance landed in the grounds. The policeman later died from his injuries.

The Foreign and Commonwealth Office minister, who has responsibility for Israel and the Palestinian Territories, was photographed administering aid to the stricken policeman in the immediate aftermath of the Wednesday afternoon attack. He was later seen with blood on his hands and face.

A Zionist Federation spokesman said: “Amid such dreadful news, there are moments of light and immense courage – this is certainly one of them.”

Elsewhere, a woman also died of her injuries after the male attacker rammed a grey 4×4 vehicle into pedestrians on Westminster Bridge, before going on a shooting and stabbing rampage. As Jewish News went to print, medics confirmed that a number of people had “catastrophic” injuries.

Grant Shapps, the Conservative MP for Welwyn Hatfield, was among the many caught up in the incident, which took place as politicians remembered the victims of a terrorist attack in Brussels exactly one year ago.

Mark Gardner, a director of the Community Security Trust, said there was no evidence that Jews were being targeted, adding: “CST has been in close contact with Police. We ask the Jewish community to be calm, vigilant and cooperate with security measures.”

Jonathan Djanogly, the Conservative MP for Huntingdon, tweeted: “My staff all fine. MPs currently held in chamber lock down.”

Chief Rabbi Ephraim Mirvis said the attack “targeted the very heart of our democracy in Westminster,” adding: “It will serve only to unite us against the scourge of violence and terrorism. The prayers of the Jewish community are with the families of the victims and with our security services, who so often selflessly place themselves in harm’s way for our protection.”

Senior Reform Rabbi Laura Janner-Klausner said: “The scenes we saw were very disturbing. The last thing we want is the sounds of gunshots outside Parliament. I know that Britain has an underpinning of calm and sense and we will return to that extremely quickly as we always have done in the past.”

Both the Board of Deputies and the Jewish Leadership said their thoughts were with the victims, while in Israel, politicians long used to similar such attacks also expressed their sympathy.

Opposition Leader Isaac Herzog tweeted: “My thoughts are with the British people, following the terrible events at Westminster. I wish a speedy recovery to all those injured.”

Former foreign minister Tzipi Livni added: “Our hearts are with the British today. Stand strong. The free world will defeat terror.” Israeli President Reuven Rivlin added: “Our thoughts are with the people of London. Terror is a threat to us all and we must stand united against it.”

The European Jewish Congress (EJC) sent condolences to the victims, and said: “We strongly condemn this cowardly and barbaric terror attack.”

President of the EJC, Dr. Moshe Kantor, said. “This strike, at the heart of democracy, on the anniversary of the Brussels attacks which claimed the lives of 32 people, once again demonstrates that radical extremists continue to have the ability and motivation to commit mass murder in  Europe.”

On this date last year, three coordinated suicide bombings occurred in Belgium: two at Brussels Airport , and one at Maelbeek metro station in central Brussels.

“This murderous ideology targets all of Europeans and all of Europe must stand together to fight this scourge,” Dr. Kantor continued.