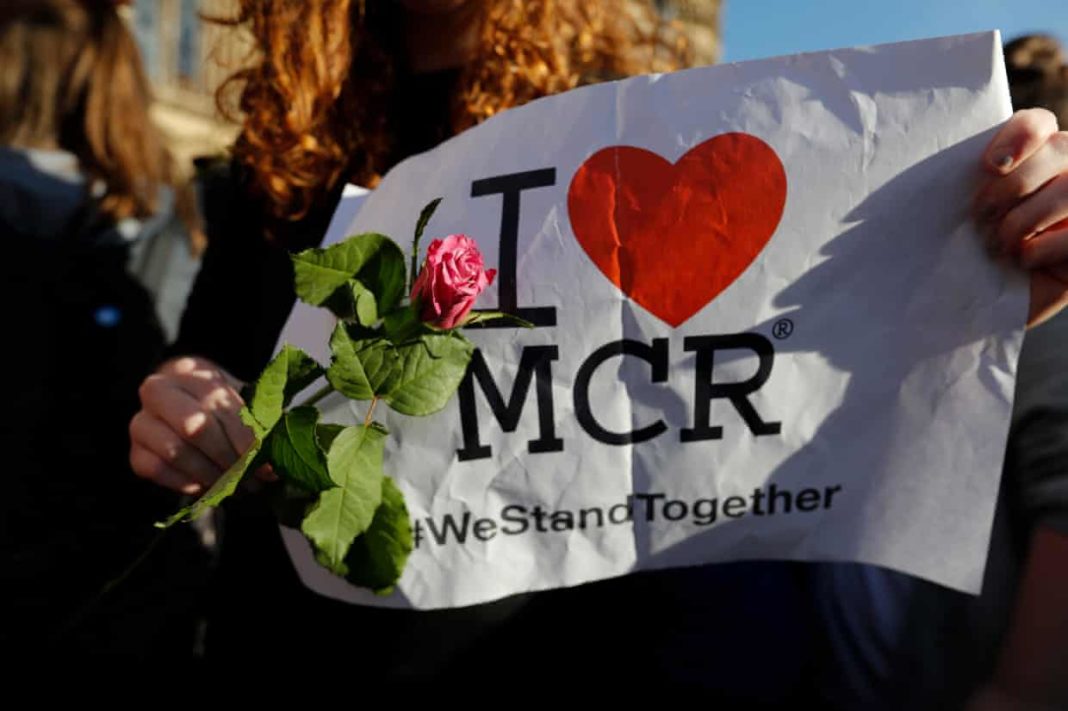 Faith leaders and community organisations across the UK have condemned Monday night’s attack.

Justin Welby, the archbishop of Canterbury, tweeted his condolences. “Heroic Manchester, dark evil cannot overcome it. We pray for those in sorrow on the hard journey of loss & pain, & for those who protect us,” he wrote.

David Walker, the bishop of Manchester, said: “What makes this latest atrocity particularly dreadful is the deliberate choice of a concert known to attract very young fans. Many lives will be lived out, impacted by this tragedy for long years to come. Others have had decades of life ripped away from them.

“There is a proper anger and rage in the face of events like this. Our challenge will be to direct that rage and anger to be a force for good. We will rally around the victims and their families. We will unite across our diversity, drawing close especially to any that the terrorists would seek to separate us from. And we will rebuild and repair the damage to our city, as we have done before.”

Churches in Greater Manchester would be open for people to pray today, he added.

Harun Khan, the secretary general of the Muslim Council of Britain, said: “This is horrific, this is criminal. May the perpetrators face the full weight of justice both in this life and the next.

“I pay tribute to the police and emergency services who have worked valiantly to save lives last night. They were helped by civilians who rushed in to offer their support. I urge all those in the region and around the country to pool together to support those affected.”

The counter-extremist organisation Faith Matters said that actions against groups promoting Islamist and victimisation narratives had rarely been effective “when they create a fertile ground for mindsets who believe that they are being targeted by the government because they are Muslim. This causes them to become more and more isolated and drawn to further extremist rhetoric”.

Founder Fiyaz Mughal added: “We are moving into another phase given the Manchester killings. For years, government has had its hands tied behind its back and worried about legal action against it if it acts against groups. Manchester should be a turning point and a realisation that terrorists will not stop their murder of innocent people.

“We have to ensure that groups promoting Islamist and far-right extremist rhetoric are challenged, shown for the hypocrites that they are and that they are a fundamental threat to our democracy.”

John Arnold, the Catholic bishop of Manchester, said such an attack “can have no justification”.

The general assembly of the Church of Scotland opened in Edinburgh with prayers and silence for the victims of the attack. “That young people and children, with others, could be the subject of what police are now treating as a premeditated act of violence is beyond comprehension. There is no cause, political or religious, that justifies actions of senseless brutality, anywhere or at any time,” said the moderator Derek Browning.

The European Jewish Congress condemned the attack. It “demonstrates once again that the enemies of civilisation have no boundaries,” Moshe Kantor, the EJC president, said. “This was a concert attended by mostly young people and children and is a ghastly reminder that terrorism sees all of us as potential targets, regardless of age, religion, nationality or background.”

Bhai Amrik Singh, the chair of the Sikh Federation UK, said: “The suicide bomber who mindlessly targeted innocent young people in the Manchester Arena must have been deranged.

“I would like to applaud Sikhs living and working in Manchester who immediately came to the support of those caught up in the terror attack. This ranged from Sikh taxi drivers who drove people away from the danger to our Gurdwaras, who opened their doors to help strangers.”.