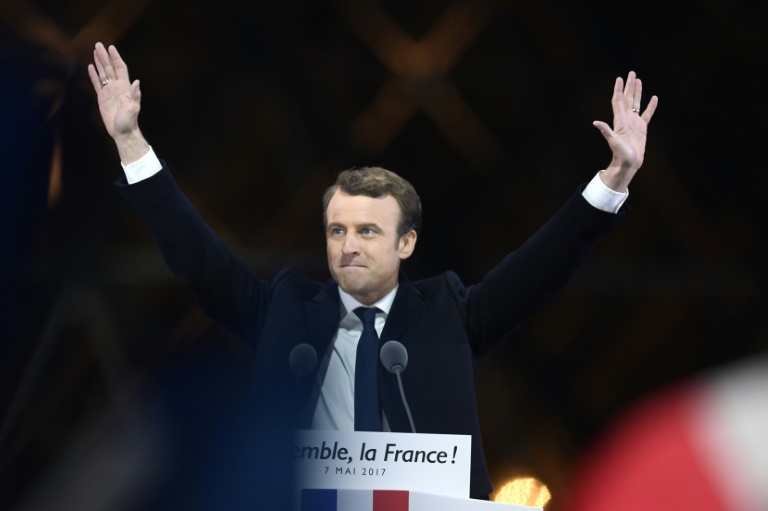 Almost definitive results showed Macron winning 65.82 percent of the vote in the first ever election he has contested, far ahead of the nationalist Le Pen at 34.18 percent.

But in a sign of widespread voter disillusionment, one in three voters abstained or cast a blank ballot.

France’s chief Rabbi Haim Korsia praised the “triumph of republican values” and saluted “the French, who mobilized to block the extreme right,” the Times of Israel reported.

Dr. Moshe Kantor, president of the European Jewish Congress, called the result “a victory against hate and extremism,” adding: “Never has a major European country faced such a challenge to its most basic value system of tolerance and democracy since all of Western Europe was dominated by fascism in the Second World War. We applaud the French people for facing this challenge with the full force of French democracy and the core values of the Republic.”

Francis Kalifat, chairman of the CRIF umbrella group of France’s Jewish institutions, said on Twitter that he had congratulated Macron, adding: “Everything starts now.

“Rabbi Pinchas Goldschmidt, president of the Conference of European Rabbis, released a statement saying the election result was “extremely encouraging”, his organization was “concerned that a third of the French population voted for a dangerous political leader.”

Macron has said he supports the creation of an independent Palestinian state as part of an Israeli-Palestinian peace agreement, but believes unilateral recognition of a Palestinian state would not be useful. As France’s economy minister in 2014-16, Macron also strongly opposed the Boycott, Divestment and Sanctions (BDS) movement against Israel and visited the country as a guest of then-economy minister Aryeh Deri, according to Israeli news site Ynet.

The Israeli politician with whom Macron is considered closest is Yair Lapid, chair of the centrist and relatively young Yesh Atid party, Ynet reported, noting that the pair met several weeks ago and have maintained contact.

About a week before the runoff, Macron visited the Holocaust memorial in Paris and said that France must “never again” see another Holocaust and slammed those who “find refuge” in casting doubt on French responsibility for collaboration in the Second World War in an apparent reference to Le Pen, who earlier in April said France was not responsible for the 1942 mass roundup in Paris of Jews who were sent to Nazi camps.

“What happened is unforgettable and unforgivable,” Macron said at the Holocaust Memorial after pausing before a wall bearing the names of 76,000 Jews who were deported, of whom just 2,500 survived. “It should never happen again.

“Le Pen’s remark on the 1942 roundup led Israeli President Reuven Rivlin to say in a public address that “a French presidential candidate denied France’s responsibility” for deportations and that “denial of responsibility of the crimes committed in the days of the Second World War is Holocaust denial of a new, more destructive and dangerous kind from that we have known till now.”

The National Front under Le Pen has for years worked to disassociate itself from the anti-Semitic roots of the party founded by her father Jean-Marie in 1972. Le Pen booted Jean-Marie, who has been repeatedly convicted for racist and anti-Semitic comments, such as calling the Holocaust a “detail of history,” from the party.

Le Pen worked to recast the party a shield for France’s Jews against Islamist extremism, saying that “many French Jews vote for us, because they know well that I am not only not anti-Semitic, but am also the best weapon to protect them” and that the Israeli government’s official boycott of the party was “insulting” to the National Front.

The French Jewish community is the biggest in Europe and is thought to number around 500,000 people, but many have been fleeing France in record numbers fearing rising anti-Semitism and following a series of attacks targeting the community.

But she encountered skepticism among many French Jewish leaders, including Rabbi Menachem Margolin of Brussels, the director of the European Jewish Association, who said voting for Le Pen was equivalent to saying “We do not want Jews in France.”

The comment came after Le Pen’s chairman Gilbert Collard, was questioned by i24NEWS about ritual slaughter for Kosher practices being outlawed by the National Front party (FN), and said “the principle of secularism will have to apply for a while.” if Le Pen takes power.

Le Pen also told Israeli television that banning French Jews from wearing a kippah in public would be a necessary step to fight radical Islamism in the country.