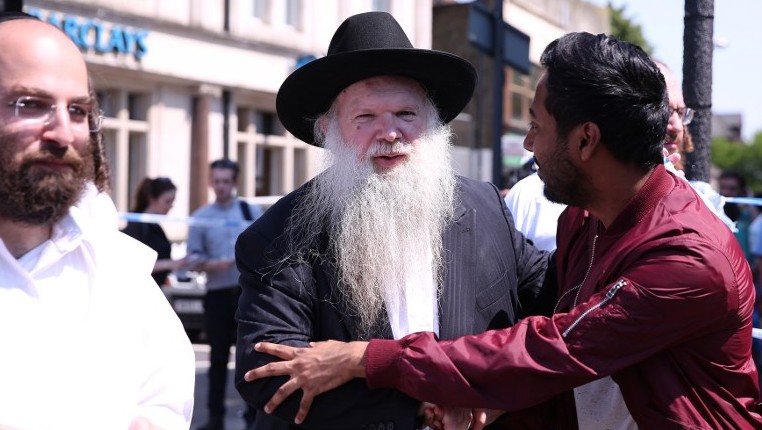 The deadly van-ramming attack at a mosque in London is “a painful illustration of why we must never allow hatred to breed hatred,” Britain’s chief rabbi said Monday, as faith leaders came together to condemn the attack.

Rabbi Ephraim Mirvis said his thoughts were with those affected by the attack just after midnight Sunday, in which a van drove into a group of people standing in front of the Finsbury Park Mosque in North London, killing one person and injuring 10. All the victims are Muslims, according to reports.

Some bystanders told reporters that the van’s driver said “Kill all Muslims” and “I did it” following the attack, and he reportedly smiled and waved at the crowds as he was taken away in a police cruiser.

The Board of Deputies of British Jews condemned the attack in a statement issued shortly after it occurred.

“All good people must stand together and join in rejecting hatred and violence from wherever it comes. The way forward is to strengthen the moderate majority and repudiate and marginalize extremism of every type,” the statement said.

The statement added: “Hatred of people because of their religion has no place in our society.”

British police said the incident was being investigated as an act of terrorism, which would make it the fourth such attack in England since March, including two van-ramming and stabbing attacks on and near London Bridge, and a bombing outside an Ariana Grande concert in Manchester.

The van driver in the mosque attack was arrested after being seized and prevented from fleeing by bystanders. A Muslim imam reportedly stopped the crowd from injuring the attacker, whose mental health reportedly will be assessed.

“We condemn this attack and its attempt to escalate tensions in the UK and we stand firmly beside our Muslim brothers and sisters in the aftermath of this attack,” EJC President Dr. Moshe Kantor said in the statement. “An attack on one religion is an attack on all religions, and all people and faiths must stand together against terror.”

Representatives of Shomrim, the north London Haredi Jewish community’s civilian volunteer security force, joined British leaders and other religious groups at a solidarity visit to the scene of the attack.

“We came with a whole team just to show our support for the Muslim community,” said volunteer Eli Feld, 29, whose force helps protect the area’s Muslims too.

Local rabbi Mendy Korer said it was important for everyone to take responsibility for building better relations between communities.

A woman holds a banner as she stands art a Police cordon close to the scene of a van attack in Finsbury Park, north London on June 19, 2017. (AFP/Isabel Infantes)

A woman holds a banner as she stands art a police cordon close to the scene of a van attack in Finsbury Park, north London on June 19, 2017. (AFP/Isabel Infantes)

“We can’t fix the world but we can fix our neighborhood,” he told AFP.

Finsbury Park, with strong Jewish and Muslim communities, is one of the many areas of London that has seen successive waves of immigration, from East European Jews in the 19th century, followed by the Irish, Caribbean islanders, Cypriots and Somalis.

Shorts and djellabas, mini-skirts and niqabs live side by side in this working-class area close to Arsenal Football Club’s Emirates Stadium, an epitome of London’s melting pot.

A multi-colored sign left by local schoolchildren read simply: “One Community Standing Together”.

“Leave Our Muslim Neighbours Alone,” said a placard held up by Alison, who told AFP that she was “upset and angry that my neighborhood has been defiled by these people who are racists and idiots.”

In a sinister twist, representatives of different faiths had come together on Saturday at the Muslim Welfare House, next to where the attack took place, to commemorate the first anniversary of the killing of British lawmaker Jo Cox by a Nazi sympathiser.

“An attack on one faith is an attack on all faiths and community. Those who try to divide us and who aim to spread fear, hatred and division will not succeed.”