Rex Tillerson: Anti-Semitism Could Get Worse With A State Department Special Envoy 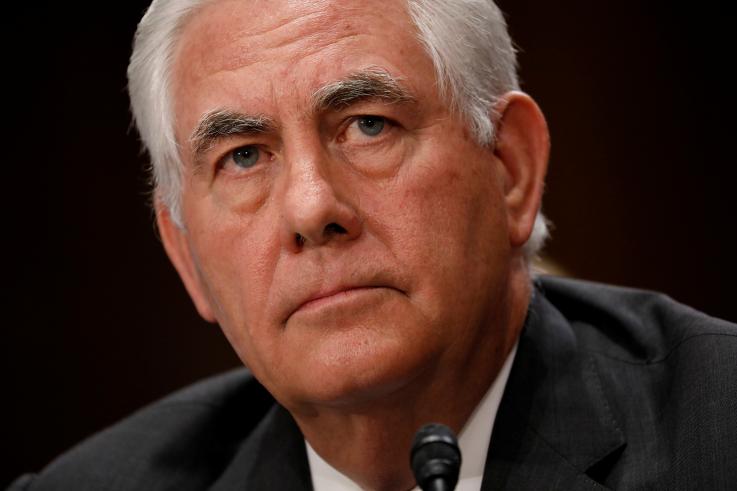 He expressed his hesitation about filling the post – which has been vacant since President Donald Trump’s inauguration but is mandated by legislation-during his testimony to the foreign operations subcommittee of the U.S. House of Representatives Appropriations Committee on Wednesday.

Rep. Grace Meng, the Democrat from New York, said in the hearing, “We have written a bipartisan letter and made repeated calls from Congress for you to fill this seat. By what date do you know if you will have appointed a new special envoy to monitor and combat anti-Semitism?”

“One of the things that we are considering-and we understand why [special envoys] were created and the good intentions behind why they were created-but one of the things we want to understand is by doing that, did we weaken our attention to those issues? Because the expertise in a lot of these areas lies within the bureaus, and now we’ve stripped it out of the bureaus,” Tillerson said.

“One of the questions I’ve asked is, If we’re really going to affect these areas, these special areas, don’t we have to affect it through the delivery on mission at every level at every country?” he added. “And by having a special person, an envoy out here, one of my experiences is, mission then says, ‘Oh, we’ve got somebody else that does that,’ and then they stop doing it. And so it was not the intent-I know the intent was to bring more attention to it-but I’m back to how do we deliver on mission? How does this actually get done?”

The Office of the Special Envoy to Monitor and Combat Anti-Semitism was created via the Global Anti-Semitism Review Act of 2004, which directed the secretary of state to establish such an office, headed by a special envoy who would work to monitor, report on and fight anti-Semitism. Since the position was created, the envoy-who operated as part of the Bureau of Democracy, Human Rights and Labor and supervised five career staffers-has helped train diplomats to identify and combat anti-Semitism.

Bloomberg reported in late February that the White House was considering eliminating the envoy, as well as positions dedicated to issues such as climate change and Muslim communities. The idea was widely panned by the American Jewish Committee, the Simon Wiesenthal Center and U.S. Representative Chris Smith, the Republication from New Jersey who authored the bill that created the position under President George W. Bush, as well as more than 100 Holocaust organizations, educators and scholars in a joint statement.

“The need becomes clearer by the day as hatred, like a tidal wave, sweeps across the nation,” the Association of Holocaust Organizations wrote in March. “Cemeteries, synagogues, churches and mosques are being desecrated. Jewish Community Centers and schools are targets of bomb threats and shootings. Swastikas and white-supremacist threats appear on walls and on social media. Now is the time to increase vigilance, not roll it back.”

In mid-April, State Department spokesman Mark Toner told the Jewish Telegraphic Agency (JTA) that the Trump administration would fill the position after all. The department “remains committed to advancing the protection of basic human freedoms and values including the unimpeded practice of religion and protection of communities of faith from persecution in every form,” Toner said in a statement. “There have been no actions taken to limit or close the offices in the department dedicated to this pursuit. Candidates have been identified for this role,” he added, though he did not specify a timeline for an appointment.

When Meng followed up on the matter Wednesday, Tillerson walked back the State Department’s April commitment. The department is “kind of holding on these things until we can understand,” Tillerson said. “Those that are mandated by statute, we will be back to talk with you about those as to whether we think it’s good to have it structured that way or whether we really think we can be effective on those issues in a different way.”

The anti-Semitism envoy cannot simply be eliminated by the Trump administration, due to the 2004 legislation, but rather it would require Congress to agree to the change.

“This is an office that previously had a website which would have reports that help our country keep tabs on global anti-Semitism and advises other countries on how to combat anti-Semitism,” Meng said in response to Tillerson. “So we in a bipartisan way are very concerned that there is no office to accomplish this. This is mandated by law,” she continued. “In the United States, there have been in recent times over 100 bomb threats to Jewish community centers in both Republican and Democratic districts, so it is something that we are very concerned about and hope that you will keep this office and commitment.”

When Meng asked straightforwardly whether Tillerson believed a special envoy on this issue was unnecessary, he said the department has yet to make a determination and that it is taking a “pause” while deciding whether the office structured as is will be the best way to deliver on the intent of the law mandating it.

A number of lawmakers and organizations reacted swiftly to Tillerson’s comments. “In order to continue fighting the rise in global anti-Semitism, it is critical that our government allocate the appropriate resources, and that begins with the key appointment to fill the special envoy role at the State Department,” Jonathan A. Greenblatt, CEO of the Anti-Defamation League, said in a statement Wednesday. “We know firsthand from working intimately with every prior envoy who had served in this very important role the tremendously positive and impactful outcomes that have been accomplished through diplomacy by these envoys.”

In April, soon after the State Department said it had selected candidates to fill the position, the ADL released its annual Audit of Anti-Semitic Incidents, which showed that the number of anti-Semitic incidents reported in the U.S. in 2016 had risen 34 percent year over year, while the number of incidents in the first quarter of 2017 had risen 86 percent compared with the same period last year. A study of global anti-Semitism released soon afterward showed a slight decline in total incidents in 2016, but “the sense of security felt by many Jewish communities remains precarious,” Moshe Kantor, president of the European Jewish Congress, said in a statement at the time.

“We are concerned by Secretary Tillerson’s remark,” Greenblatt emphasized on Wednesday, “and urge him and the president to reconsider and make clear that the State Department will not wane in its efforts to stem anti-Jewish hatred overseas.”