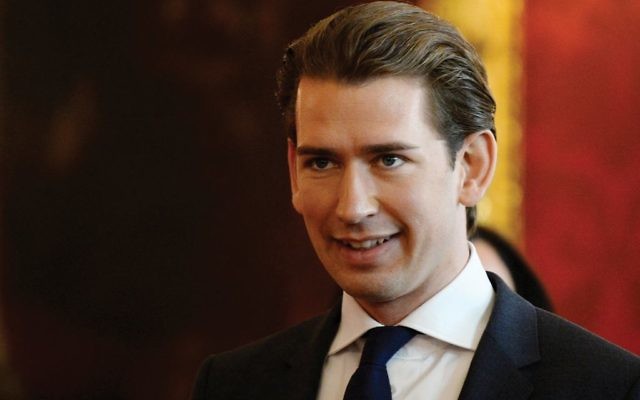 Warning signs across the Continent amid anti-immigrant tide.

Jewish groups were breathing a sigh of relief earlier this year after far-right political parties in France and the Netherlands did poorly in national elections. But there is renewed concern now following the surprising strength of far-right parties in elections over the last three weeks in Germany and Austria.

Mindful of the fact that Austria is often seen as a political bellwether in Europe, Jewish groups are calling upon Sebastian Kurz, Austria’s presumptive next chancellor, not to form a coalition government with the country’s far-right Freedom Party because of its past neo-Nazi ties. Mail-in votes were still being counted this week following Sunday’s election, and the Freedom Party was running neck-and-neck with the center-left Social Democrats.

Moshe Kantor, president of the European Jewish Congress, released a statement saying the Freedom Party had “run on a platform of xenophobic intolerance and the targeting of immigrants [and that it] must not be granted a seat at the governing table.”

Ronald Lauder, president of the World Jewish Congress, who was America’s ambassador to Austria from 1986 to 1987, issued a statement calling the party’s strong showing “sad and distressing.”

“… [T]hat such a platform should receive more than a quarter of the vote. … It is still full of xenophobes and racists and is, mildly put, very ambiguous toward Austria’s Nazi past. My only hope is that they won’t end up in government.”

Kurz has yet to decide which party to invite into his coalition government, but he told the Israeli newspaper Israel Hayom that no matter which party he chooses, it would first have to denounce anti-Semitism.

“The fight against anti-Semitism and a policy of zero tolerance against any anti-Semitic tendencies is very important for me,” he said. “This is a clear precondition for any coalition that I would lead. There must be no doubt about this at all. None. The FPO [Freedom Party] has in the past shown efforts to fight anti-Semitism, in its own ranks as well, and I expect them to continue to do so.”

The strong showing of the far-right parties in Germany and Austria is attributed to a growing anti-immigrant populism and nationalism that is in stark contrast to the European Union’s support of open borders for trade and immigration. Austria’s Freedom Party has been around a long time, founded in the mid 1950s by a former Nazi SS officer. Germany’s far-right party, Alternative for Germany [AfD], was founded in 2013 and it garnered more than 13 percent of the vote.

But Maram Stern, the WJC’s deputy CEO of diplomacy, said in a phone interview from Brussels that the AfD vote was more a protest vote against German Chancellor Angela Merkel than a true reflection of voter support for the party.

“They were angry and just cast that vote to show their anger,” he said, explaining that their anger stemmed from the 1 million migrants Merkel admitted into the country.

Similarly, Stern said, “those who elected the Freedom Party did so because they were tired and sick of the old system [of government]. … People want fresh faces, which makes them believe there will be change.”

French voters got just that with their election of Emmanuel Macron as the country’s next president. He started his own party just a year ago and handily beat far-right nationalist candidate Marine LePen in a runoff election.

“Macron has a beautiful face and is young and fresh, just like [Canadian Prime Minister Justin] Trudeau,” said Stern.

Similarly, he said, Kurz, 31, is a “young, good looking and charming man who knows how to speak to people, and that made him win.”

But clearly the migration issue was paramount in voters’ minds and was “a key element in the [political] shift to the right,” said David Harris, executive director of the American Jewish Committee.

“This includes a sense among some voters that integration hasn’t worked particularly well, that the sheer numbers of newcomers could affect the character and identity of countries, that decisions are too often made by leaders far removed from the consequences of those decisions, and that mainstream political parties have lost touch with what’s on the minds of these citizens,” he said in an email interview.

When the Freedom Party was part of Austria’s governing coalition from 2000 to 2005, the Israeli government responded by recalling its ambassador, and many European countries imposed sanctions on the country. [The sanctions backfired and were withdrawn within months.]

The Israeli government of Prime Minister Benjamin Netanyahu has not signaled what it will do should the Freedom Party be asked to form a coalition government in Austria and observers said it was unlikely European countries would again impose sanctions.

Harris said Israel’s decision would “not necessarily” be easy and that he is sure Austria’s 9,000 Jews would want to weigh in.

Arie Kacowicz, a professor in the Department of International Relations at the Hebrew University of Jerusalem, said he, too, does not know how Israel will respond should the Freedom Party be invited to form a coalition government.

“The idea of a right-wing party with a message against migration – there is just so much Israel can say about it,” he told The Jewish Week from Jerusalem. “In Germany, for the first time in years, we saw a right-wing party [elected to the Bundestag] and there was very little reaction from our government.”

Netanyahu did complain to Merkel, however, about the rise of anti-Semitism in Germany.

Dan Mariaschin, executive vice president of B’nai B’rith International, said that as Merkel looks for coalition parties to form her next government, “I don’t think she will include AfD. … She has made clear that the last thing she needs is that weight around her neck to reflect on her government.”

He noted that far-right parties now govern Poland and Hungary and that immigration and economic conditions were among the issues that propelled them to power.

“There has been a perfect storm of a number of issues that has brought about the success of these parties,” Mariaschin said. “There has also been a disillusionment with the European Union and a belief that Brussels [the seat of the EU] is filled with bureaucrats who don’t really care about the people. That has rolled into the same kind of anger you see on the right, and it will make doing business with the Austrian government difficult should these people enter the government – there will always be a shadow havnging over it.”

Rabbi Abraham Cooper, associate dean of the Simon Wiesenthal Center, said it should be remembered that “not long ago Austrians elected Kurt Waldheim as their president with their eyes wide open even after he had tried to hide his Nazi past. Who knows, it may have even helped him get elected.”

He said the success of the Freedom Party is “not about its old Nazi ties but about its reaction to taking in nearly 100,000 Muslim migrants and refugees. … The country has a fairly stable economy, but they were seen as outsiders who were taking our jobs and threatening our national identity.”

Nevertheless, Sabine von Mering, director of the Center for German and European Studies at Brandeis University in Waltham, Mass., said she does not believe Kurz “has much choice.”

“The reason there was an election in Austria is that the public did not want the grand coalition anymore,” she said, referring to the coalition government of Chancellor Christian Kern and his center-left Social Democrats and Kurz’s center-right People’s Party.

The Israeli website Ynet reported this week that Israeli officials have determined that the Freedom Party is one “with clear anti-Semitic characteristics.”

The Freedom Party is led by Heinz Christian Strache, the political heir of Jörg Haider, the former head of the Freedom Party who adamantly insisted he was not anti-Semitic but who was known for his praise of Nazi leader Adolph Hitler’s employment policies. Haider was killed in a car crash in 2008.

Austria’s ambassador to Israel, Martin Weiss, told I24 News that the Freedom Party has changed its DNA and is now the party of workers who are concerned about the influx of migrant workers. Beginning in 2015, Austria became the gateway for nearly 900,000 migrants enroute to Germany; it reportedly received asylum applications from 68,000 of them.

Strache, 48, has admitted in interviews that as a youth he visited camps affiliated with Austrian neo-Nazi organizations. He was arrested by German police more than 30 years ago for taking part in a torch-lit protest by a group aping the Hitler Youth. He described all of this as things he did as a youth when he was “stupid, naïve and young.”

Mering noted that the far-right parties in both Germany and Austria are “openly anti-Muslim, but Jews should not be comforted and feel safe. Ultimately, these people are saying Germany is for the Germans and Austria is for Austrians – they don’t want Muslims or Jews and I don’t see any reason to trust them.”