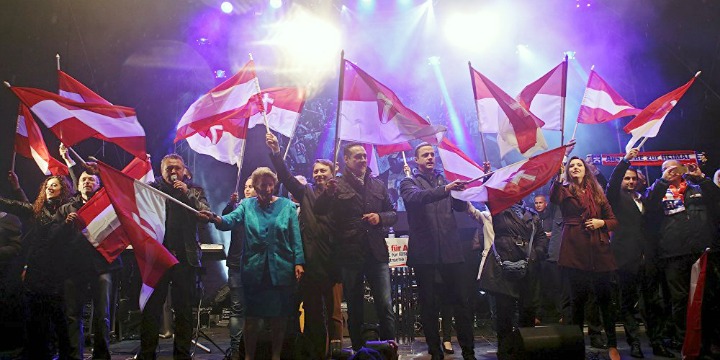 Jewish leaders have expressed alarm at the prospect of a governing coalition in Austria dominated by the far-right, following Sunday’s strong showing in national elections by the ultranationalist Freedom Party (FPO).

The FPO was narrowly beaten in the poll by the mainstream conservative Austrian People’s Party (OVP,) whose 31-year-old head, Sebastian Kurz, is now set to become Europe’s youngest leader. Kurz’s party won 30.2 percent of the vote, with the FPO winning 26.9 percent.

Officials of the European Jewish Congress (EJC) offered their congratulations to Kurz, but urged him not to form a government with the FPO.

“The right and the far-right have won the parliamentary elections in Austria because of the refugee crisis and the opposition to political Islam,” said EJC vice-president Dr. Ariel Muzicant. “For the Jewish community, it is also a major problem that the FPO will, with high probability, be in the next government.”

Muzicant criticized those politicians abroad – “including some from Israel” – who believe that the FPO’s overtures to the Jewish community and Israel should be taken at face-value. In November 2016, FPO leader Heinz-Christian Strache told his party that antisemitism was “a crime against humanity,” adding that if “Israel as a state is threatened and ceases to exist, that is the beginning of Europe’s downfall.” Most of Austria’s 15,000-strong Jewish community has continued to reject the party, however.

“Many politicians, including some from Israel, like to forget that the majority of FPO functionaries remain ‘kellernazis,’ those who continue to attend their fraternities with their German national and antisemitic ideology,” Muzicant argued.

The EJC’s president, Moshe Kantor, called on Kurz “not be beholden to a party of the far-right in his new coalition government.”

“Europe in general and Austria in particular should know all too well where acceptance of populist and pernicious ideologies leads,” Kantor said. “Austria’s central role in post-war European construction founded on democracy and human rights must not be allowed to be sacrificed on the altar of political expediency and short-term populism which reminds us of far darker times within living memory.”

Lauder stated that the FPO was “still full of xenophobes and racists and is, mildly put, very ambiguous toward Austria’s Nazi past.”

“Like the AfD in Germany, the National Front in France, or Jobbik in Hungary, the FPO is an extremist party that panders to racists and anti-Semites and whips up feelings against minorities,” Lauder – a former US ambassador to Austria – said.

Praising Kurz as “extremely capable,” Lauder stressed that the new Austrian leader would be better served by a coalition with the Socialist Party (SPO.) Lauder described the SPO’s leader, Christian Kern, as a “reliable partner,” who has “shown time and again that he is a friend of the Jewish people and of the State of Israel.”