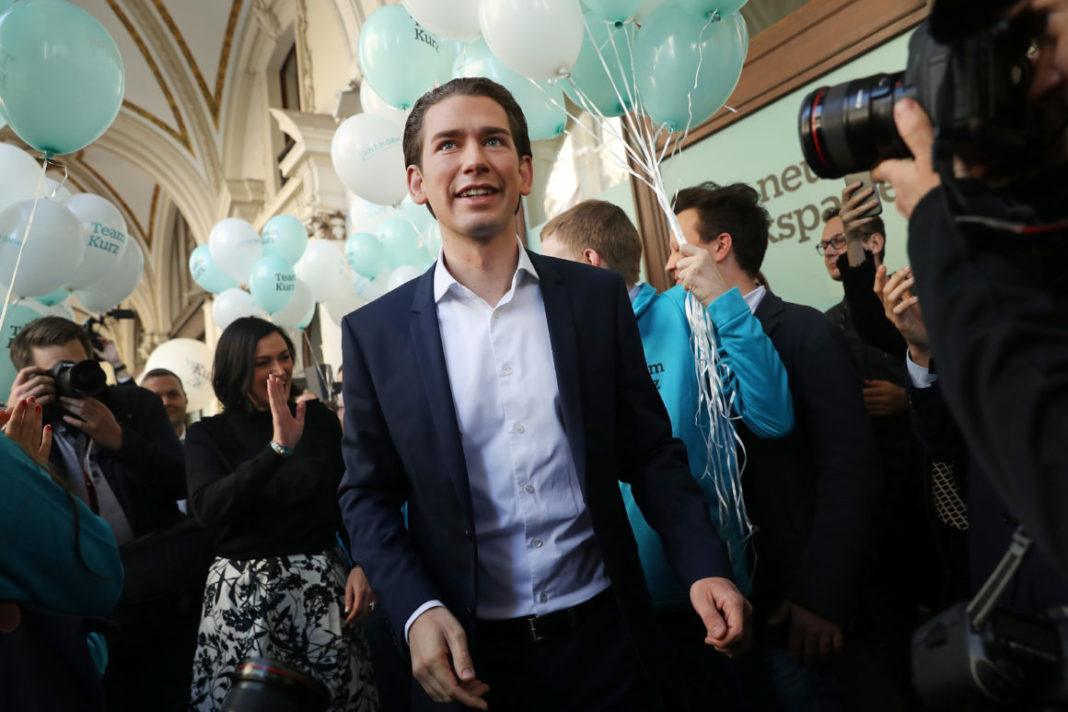 Austria’s conservatives and right-wing populists surged to victory in Sunday’s parliamentary election, according to projections, heralding a tectonic shift in the country’s politics after more than a decade under a centrist coalition.

The results, if confirmed, should clear the way for a right-leaning coalition and vault the ÖVP’s 31-year-old leader, Sebastian Kurz, into the office of chancellor, making him Europe’s youngest head of government.

“This is our chance for real change,” Kurz told his supporters after the results were announced. “There is much to do. It’s time for a new political style, time to create a new political culture.”

The rightward shift, coming less than a month after the far-right Alternative for Germany (AfD) won nearly 13 percent of the German vote, illustrates the continued potency of the refugee crisis in European politics, a message that will resonate across the EU.

Beyond migration, the Freedom Party shares many of the Euroskeptic positions held by governments in Central Europe and has even suggested Austria join the loose coalition known as the Visegrad Group, which includes the Czech Republic, Slovakia, Hungary and Poland.

Given the Freedom Party’s long history of attacking the EU, Austria’s relations with Brussels are likely to face a new test. Unlike in 2000, however, when the inclusion of the FPÖ triggered diplomatic sanctions by other EU members, the reaction to Sunday’s vote is expected to be more low-key. Years of populist successes across the Continent have made Austria – once an outlier – the norm.

“The reaction will be muted and people will move on,” said Cas Mudde, a Dutch specialist in Europe’s far-right movements and professor at the University of Georgia in the U.S.

Even as the Freedom Party improved its result by about 5 percentage points over 2013, the election also illustrates that despite the continued inroads by the far right, many voters still don’t trust the populists to lead. The Freedom Party had consistently led opinion polls by a wide margin until May, when Kurz emerged as the People’s Party leader.

Kurz, currently foreign minister, shaped his entire campaign around the question of limiting migration, while the FPÖ ran on a hard-line anti-Islam platform. Austria accepted one of the highest proportions of refugees during the 2015 crisis.

Even though the FPÖ was first to stake out tough positions on refugees and Islam, voters flocked to the mild-mannered Kurz, who takes credit for stemming the influx of refugees to Austria by “closing” the Balkan route. Though many experts challenge that assertion, most Austrians believe Kurz was instrumental in reducing refugee flows.

FPÖ chief Heinz-Christian Strache, who spent much of the election complaining that Kurz had co-opted his platform, called Sunday’s result “a tremendous success.” If the party ends up in third place, however, Strache’s own position atop the FPÖ could be in jeopardy.

What’s particularly striking about Kurz’s rise is that he succeeded in winning the election by bucking accepted wisdom on how to take on populists. Political advisers across Europe have warned centrist candidates against copying the policies and rhetoric of far-right parties, arguing that voters would stick with the original.

Kurz, who has remade the stodgy ÖVP in his own image in recent months, going as far as to change the party’s color to a soft turquoise from black, proved that cloning populist positions can lead to success under the right leader.

In doing so, he appears to have convinced voters that he and his party are agents of change, even though they have been part of every Austrian government since 1987, the year after Kurz was born.

Many voters blamed the SPÖ, which has led a grand coalition with the ÖVP since 2007, for allowing large numbers of refugees into the country.

Nonetheless, the projections suggest the SPÖ, the dominant political force in post-war Austrian politics, did better than many Social Democrats had feared.

The SPÖ was hit by a dirty campaigning scandal just two weeks before the poll, sparking worries that the party would face a disastrous election, similar to the steep losses suffered by Germany’s Social Democrats last month. If the projections are borne out, the SPÖ will land roughly where it did in 2013.

Chancellor Christian Kern, the party’s leader, blamed its stagnation on the polarization of Austria’s political atmosphere. The campaign, even before accusations of dirty campaigning emerged, was one of the most caustic in the country’s history. Kern singled out the country’s right-wing tabloid media, which he accused of targeting the SPÖ during the campaign.

“We’re not excited by the result but we can live with it,” Kern said, adding that he would stay on as party chief. “We’re fighting against a massive shift to the right.”

He said he expected the ÖVP and the FPÖ to form a government.

Kurz and Strache declined to confirm such speculation, insisting they would wait for a final result and a call from the country’s president, who charges the election winner with forming a government, to begin deliberations.

The European Jewish Congress (EJC) congratulated Kurz but urged him to “not be beholden to a party of the far right in his new coalition government.”

“A party which has run on a platform of xenophobic intolerance and the targeting of immigrants must not be granted a seat at the governing table,” said EJC President Moshe Kantor.

With the SPÖ and FPÖ neck-and-neck, it could take days to determine who won second place. Voters cast about 900,000 postal ballots, which won’t be completely tallied until Thursday. About 6.4 million Austrians were eligible to vote.

The question of second place is unlikely to forestall a right-leaning coalition, however, because the ÖVP and FPÖ would still have enough support to form a government.

A cluster of smaller parties also appeared poised to join the parliament, though it was unclear whether the Greens would have enough support. The Greens suffered huge losses after Peter Pilz, one of the party’s leading figures, broke away earlier this year to form his own movement.

“It’s a bitter loss, a debacle,” said Ulrike Lunacek, the Greens’ lead candidate, who also represents the party in the European Parliament.

Support for the Greens fell to 3.9 percent from more than 12 percent in 2013. The threshold to join parliament is 4 percent.

Pilz’s new party scored 4.3 percent and the liberal Neos party finished with 5.1 percent. If the result holds, Austria’s parliament will have five parties.