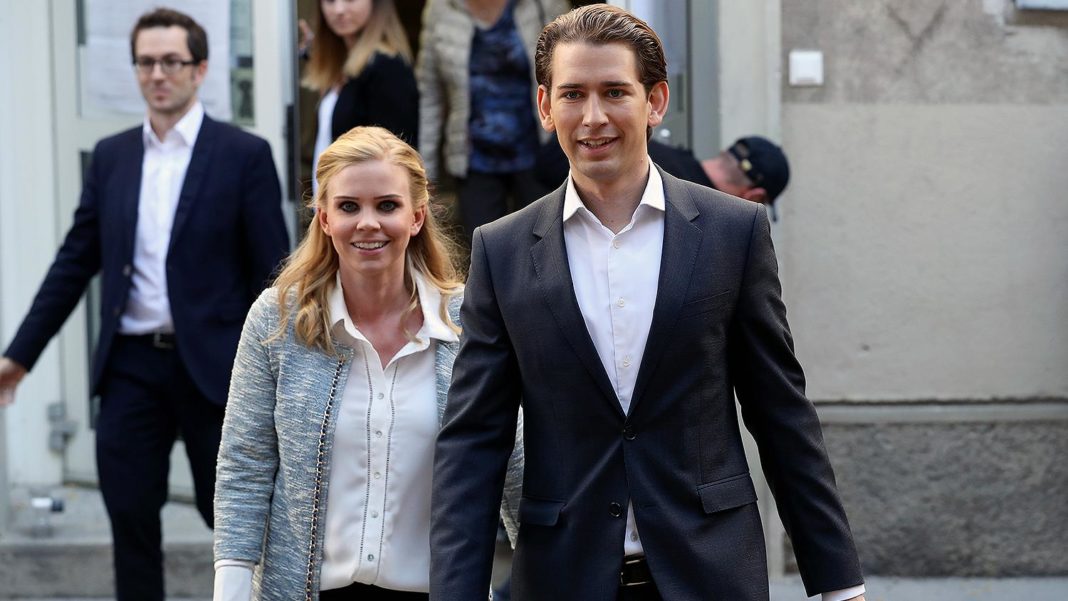 Austrians have taken their country to the right as elections yesterday ushered into power the world’s youngest leader, who is poised to form a government with an extreme nationalist party founded by former Nazis.

Preliminary results last night had Sebastian Kurz, 31, leader of the Christian Democrat Austrian People’s Party (OVP), in the lead with 31.4 per cent of the vote, putting him on track to become chancellor. “I promise I will fight for great change in this country. It’s time to establish a new political style and a new culture in this country,” Mr Kurz said.

His first decision will be whom to form a government with: the far-right Freedom Party (FPO) in second place on 27.4 per cent, or the Social Democrats (SPO), on 26.8 per cent.

The SPO and OVP have governed in coalition, as part of continental Europe’s tradition of centrist consensus, for the past decade but after the dirtiest election in postwar history it is unlikely that they will form another government. Christian Kern, the chancellor, was hit by a scandal when it emerged that consultants on the SPO’s payroll were behind Facebook campaigns using fake right-wing sites to personally target and undermine Mr Kurz.

Mr Kern, who became the party’s leader last year, has said he will stay on as Social Democrat leader and await the decision by Alexander Van der Bellen, the country’s president, to begin coalition talks. “The ball is now in the president’s court, then it will be with the OVP leader,” he said.

Mr Kurz has previously signalled that his desire is to form a powerful anti-establishment coalition with the FPO. It is a step that will be controversial across the EU, heralding a new right-wing, nationalist and anti-immigrant alliance with Poland, Hungary and other central European countries concerned about Muslim refugees.

The European Jewish Congress urged Mr Kurz last night to reject a coalition with the far right in favour of returning to government with the SPO. “A party which has run on a platform of xenophobic intolerance and the targeting of immigrants must not be granted a seat at the governing table,” Moshe Kantor, the congress’s president, said.

He said that Austria’s central role in postwar Europe, “founded on democracy and human rights”, should not be “sacrificed on the altar of political expediency and short-term populism which reminds us of far darker times within living memory”.

Running an anti-immigrant campaign on the platform of “Austrians first”, echoing Donald Trump, Mr Kurz rebranded the OVP as his “personal movement”, dropping the traditional Christian Democrat colour of clerical black for a trendy turquoise. “I have the strength of will to break apart the old system,” he said last month.

Mr Kurz built his victory on a brash celebration of his youth and humble origins combined with a tough stance on immigration and terrorism. His response to the EU migration crisis was to call for Europe’s internal borders to be closed, with incoming migrants to be intercepted at sea and held in detention centres before reaching European territory.

His election manifesto calls for illegal migration into Europe to be stopped and for benefits to be cut and capped for asylum seekers, with a ban on any welfare payments to non-European immigrants until they have lived in Austria for five years. “We must stop illegal immigration to Austria because otherwise there will be no more order and security,” he said at the weekend.

As Austria’s youngest ever minister in 2013 Mr Kurz took the foreign affairs portfolio but demanded a brief on social integration, allowing him to draft Austria’s Islamgesetz legislation that banned the foreign funding of mosques and prohibited unofficial or radical versions of the Koran.

Mr Kurz is seen as a charismatic figure who has transformed his party’s traditional conservatism into a populist sensibility tailored for the social media age. His campaigning has been successful and overturned the far right’s lead over the OVP. The FPO has accused Mr Kurz of copying its ideas and its leader Heinz-Christian Strache echoed the fears of many Austrian liberals by describing Mr Kurz as an “imitator” of him.

The far right narrowly failed to capture the presidency in December when Norbert Hofer, the FPO candidate, was defeated by Mr Van der Bellen, who won with 53 per cent of the votes. When the OVP and FPO shared power from 2000 to 2007 many countries ostracised Austria and the EU explored sanctions such as stripping the country of voting rights.