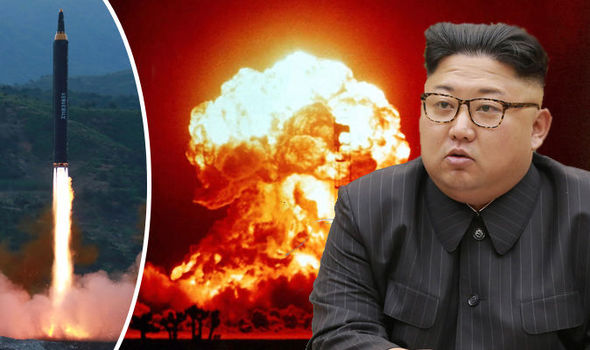 North Korea’s increasing warmongering could prompt a string of nuclear strikes as international hostilities put the world on the brink of war, according to the President of the International Luxembourg Forum on Preventing Nuclear Catastrophe.

Dr Viatcheslav Moshe Kantor, a Jewish leader, philanthropist and businessman, issued a stern warning about the growing international tensions as he addressed the audience at the Paris forum on Monday, which included former prime minister Tony Blair and William Perry, who served as the US secretary of defence for three years under Bill Clinton.

Dr Kantor said: “The North Korea crisis could spark a global chain of nuclear strikes, a reality made more likely given that the possibility of a deliberate provocation by North Korea cannot be dismissed entirely.

“With the added risk posed by key regional partners and fellow new nuclear states Pakistan and India, even a single nuclear strike could trigger an unpredictable spiral of nuclear reprisals.

“The situation on the Korean peninsula is ever tenser and has hit a critical peak due to Kim Jong-un’s nuclear and missile provocations.

“Past experience clearly shows that without negotiations on the limitation of strategic weapons based on the balance of nuclear forces, an uncontrollable arms race towards this most destructive weapon becomes inevitable.

“Leaders of the leading nuclear states must resume cooperation on securing weapons of mass destruction, including nuclear material security, to prevent the threat of catastrophic terrorism. In particular, emphasis should be given to improving the security of radiological materials to counter the growing danger of terrorist acts using a dirty bomb.”

Among the other speakers was Mr Blair, who branded North Korea “abhorrent”.

He said: “We can threaten military action… But unless there are elements of which I am unaware in either the weakness of the North Korean defences or the strength of US capabilities, it is hard to think of a pre-emptive strike which would not result in catastrophic consequences.”

Meanwhile, North Korea’s foreign minister has accused Donald Trump of lighting “the wick of war” with his repeated insults and threats.

Ri Yong Ho, Pyongyang’s foreign minister, hit out at the US President and said the tensions will not be settled with words.

He said: “With his bellicose and insane statement at the United Nations, Trump, you can say, has lit the wick of a war against us.

“We need to settle the final score, only with a hail of fire, not words.”

On Saturday he tweeted: “Presidents and their administrations have been talking to North Korea for 25 years, agreements made and massive amounts of money paid hasn’t worked, agreements violated before the ink was dry, makings fools of U.S. negotiators. Sorry, but only one thing will work!”

This was followed on Monday by the following tweet: “Our country has been unsuccessfully dealing with North Korea for 25 years, giving billions of dollars & getting nothing. Policy didn’t work!”