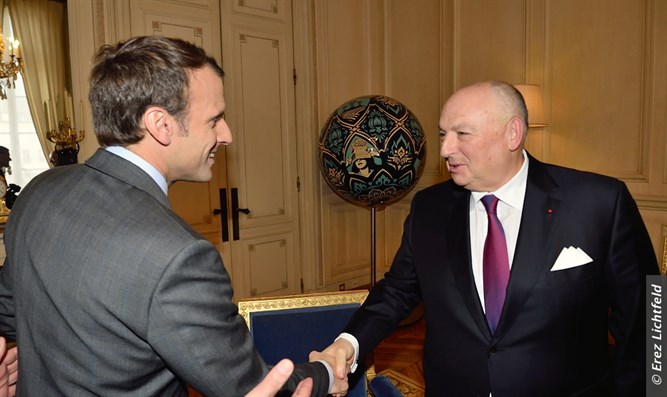 A delegation from the European Jewish Congress (EJC), led by President Dr. Moshe Kantor, met with French President Emmanuel Macron in Paris. The delegation included Francis Kalifat, president of the CRIF, the umbrella organisation of French Jews and the country’s EJC affiliate.

During the meeting, the delegation told President Macron that the EJC unanimously opposes any meetings or dealings with far-right political parties in Europe.

“We must draw strong and unequivocal red lines against all interaction with far-right European political parties,” Dr. Kantor said. “Some like to use the Jewish community as a fig leaf for their racist and xenophobic agendas or try and make common ground over views on Israel. We emphatically reject all these overtures and stand in complete solidarity with all targets of their intolerance and racism.”

“Yesterday, Jews were the main targets and today it may be some other group. But we are under no illusions whatsoever that anti-Semitism remains a significant part of their worldview regardless of political tactics or electoral expediency.”

Dr. Kantor also told President Macron that the Jewish community stands shoulder to shoulder with the French Government and people in its battle against extremism and terrorism.

“In recent times, France has been attacked in the most severe way for the values and freedoms it stands for,” Dr. Kantor said. “First Jews were their target, but there is no doubt that they seek to attack all French citizens and the values of the French Republic.”

“The challenges that the French government must overcome are huge and we stand in full solidarity with the French people, willing and able to contribute in any way to our collective fight against terrorism and extremism.”

Arutz Sheva asked if the EJC was similarly concerned about anti-Semitism on the far-left and the attempts by certain far-left political parties to disguise anti-Semitism as anti-Zionism.

The EJC responded: “The EJC is of course also deeply concerned by anti-Semitism on the far-left and see that in many ways the political spectrum has become circular with many characteristics of both extremes mimicking each other, especially regarding attitudes towards Jews and the Jewish State.”