Israel to Poland: ‘Act Against the Organizers’ Of ‘Dangerous’ March With Anti-Semitic Messages 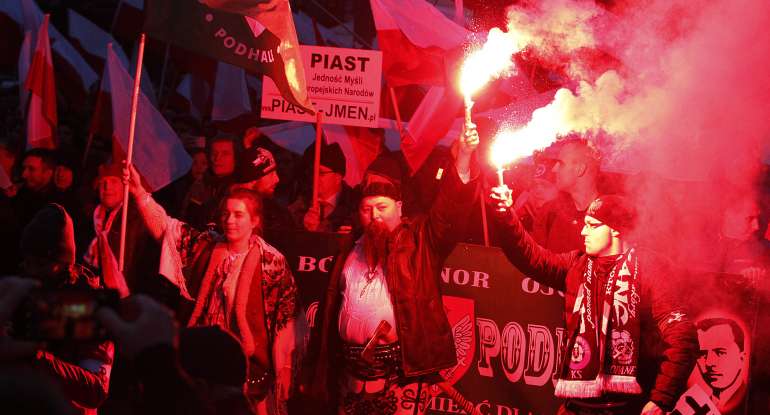 Israel’s Ministry of Foreign Affairs has called on the Polish government to take action against anti-Semitism after a weekend nationalist march included demonstrators calling for a country free of Jews.

Israeli Foreign Ministry spokesman Emmanuel Nahshon told the Associated Press that the event was “a dangerous march of extreme and racist elements.”

“We hope that Polish authorities will act against the organizers,” Nahshon said. “History teaches us that expressions of racist hate must be dealt with swiftly and decisively.”

The rally of some 60,000 Poles included chants of “Pure Poland, white Poland!” and “Jews out of Poland,” and banners with slogans such as “white Europe of brotherly nations” and “pray for Islamic Holocaust.”

Interior Minister Mariusz Blaszczak called the demonstration “a beautiful sight,” adding that “we are proud that so many Poles have decided to take part in a celebration connected to the Independence Day holiday.”

“While the joyous 99th anniversary of Polish Independence was appropriately celebrated in ceremonies led by President Duda, the day was seriously marred by hateful, far-right throngs that threaten the core values of Poland and its standing abroad,” said Agnieszka Markiewicz, director of AJC’s Warsaw-based Central Europe office. “The growth of xenophobic nationalism in Poland is becoming more dangerous, and we urge the government to condemn unequivocally the phenomenon and take appropriate action to counter it.”

“The apparent tolerance shown for these purveyors of hate – and, let’s be clear, that’s exactly what they are – by some Polish government officials is particularly troubling,” Markiewicz added.

“Alarming that white supremacist rally in Poland today drew 1000s of young Europeans who, like those who marched in #Charlottesville, believe in ‘ethnic purity’ and target immigrants, Muslims and Jews for #hate,” tweeted Anti-Defamation League CEO Jonathan Greenblatt.

The European Jewish Congress warned at the end of August that “there has been a distinct normalization of antisemitism, racism and xenophobia in Poland recently.”

EJC president Moshe Kantor said that anti-Semitic incidents including a proliferation of “fascist slogans,” banners and commentaries “appear to have coincided with the Polish government closing its communications with the official representatives of the Jewish community.”

A University of Warsaw Centre for Research on Prejudice study released in January found 37 percent of Poles surveyed voicing negative attitudes towards Jews in 2016, up 32 percent from 2015 – sentiment especially driven by young Poles.

Ninety percent of Poland’s 3 million Jews were killed in the Holocaust; the Nazi death camps of Auschwitz-Birkenau, Belzec, Chelmno, Majdanek, Sobibor and Treblinka were located in the country.

The World Jewish Congress estimates the number of Jews in Poland today to be between 5,000 and 20,000 – largely concentrated in Warsaw, which before World War II was 30 percent Jewish.

“History has painfully taught us that silence or inaction in such matters can come with a high price,” said Markiewicz.