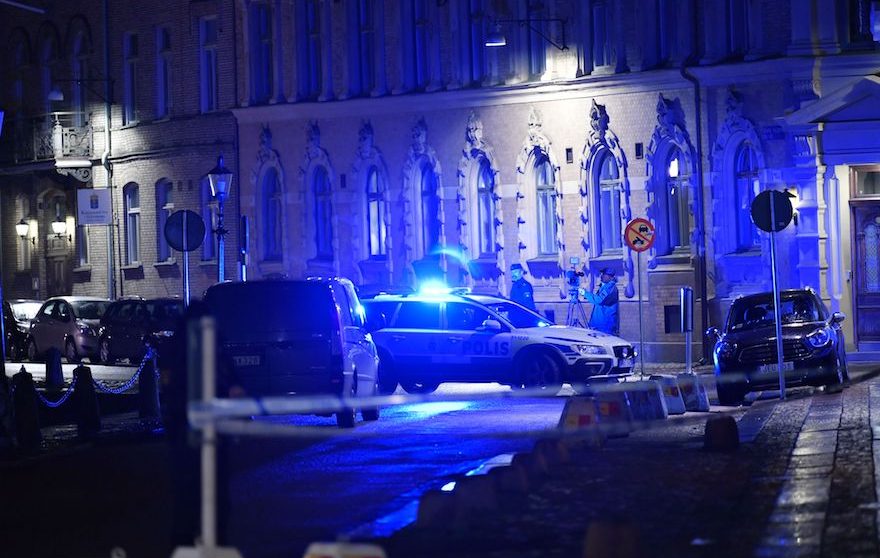 More than a dozen men hurled firebombs at a synagogue in Gothenburg in southern Sweden hours after locals marched in the city against the United States’ recognition of Jerusalem as Israel’s capital.

No one was injured in the attack last Saturday night, which ended without major damage to property, the online edition of the Expressen daily reported.

Dvir Maoz, the World Bnei Akiva youth movement’s emissary in Gothenburg, told JTA that the attack happened a little after 10pm while youths from the local Jewish community were attending a party inside the synagogue complex.

Looking outside from inside the synagogue lobby area, he said he saw in the corner of his eye “a ball of fire” approaching the building.

“The guards saw it in the security cameras and called police right away. The children were stressed, it was the first time they had ever experienced a terrorist attack near them.”

The teenagers’ parents were called to take them home after police arrived at the scene and scanned the area to make sure it was safe to come out, he said. The culprits had already left by the time police arrived. The building did not sustain any substantial damage that he could see, Maoz added.

As they waited for police to arrive, the teenagers were taken down to the basement floor for safety, Laila Takolander, a member of the local Jewish community, told the Expressen Daily.

Hours before the attack, which police are investigating, several hundred people marched through the city’s centre in protest of President Donald Trump’s declaration on Wednesday that the United States recognises Jerusalem as Israel’s capital, George Braun, the head of the community, told JTA.

“It is unconscionable that Jews are under attack on the streets of Europe, whether by terrorists hurling Molotov cocktails or openly and brazenly calling for the mass murder of Jews in Malmo, Vienna and Paris,” European Jewish Congress President Moshe Kantor said in a statement.

“We call on European governments to take strong punitive action against those who perpetrated these acts and call for the immediate arrest of anyone who makes anyone making murderous chants.”

At other protest rallies in Sweden, Austria and France, participants chanted, respectively, in Arabic about shooting Jews, an ancient massacre of Jews, and freedom for Palestinian terrorists.

At a Swedish rally in the city of Malmo, chants about shooting Jews were heard on Friday night in the southern city of Malmo, Sveriges Radio reported.

“We have announced the intifada from Malmö. We want our freedom back, and we will shoot the Jews,” some of in the rally of 200 demonstrators shouted, according to the public radio station.

Earlier that day in Vienna, hundreds of participants in rally shouted in Arabic, “Jews, remember Khaybar, the army of Muhammad is returning.”

The cry relates to an event in the seventh century when Muslims massacred and expelled Jews from the town of Khaybar, located in modern-day Saudi Arabia.

And in France, around 400 people gathered at Place de la République Saturday, where they cheered when an organiser, wearing a shirt that promotes a boycott of Israel, said: “This demonstration is also about freedom for Hassan Hamouri, Marwan Barghouti and all the Palestinian prisoners.” The crowd shouted back: “Freedom to the Palestinian prisoners.”

Barghouti was sentenced by an Israeli court in 2004 to multiple life sentences for planning dozens of deadly terrorist attacks. Hamouri is a terrorist for the Popular Front for the Liberation of Palestine terrorist group who was arrested by Israel in 2005 and imprisoned following his conviction of planning to assassinate the late Israeli rabbi Ovadia Yosef.

Hamouri, who is a French citizen, was released in exchange for the Israeli soldier Gilad Shalit, whom Hamas abducted in 2006. But he was arrested again, allegedly for violating the terms of his release by continuing to plan terrorist activities.

The speaker at the Paris rally also urged listeners to show their “solidarity and resistance”. They chanted “Netanyahu war criminal” and called for the arrest of the Israeli Prime Minister, Benjamin Netanyahu, during his visit on Sunday to France and Brussels.

A smaller protest rally than the one held on Republique Square took place in the eastern city of Lyon Saturday.

Separately, Dutch police released from custody a 29-year-old Palestinian who on Thursday smashed the windows of a kosher restaurant in Amsterdam’s south while waving a Palestinian flag, the De Telegraaf daily reported.

He will be tried on December 20 for vandalism and for theft,of the restaurant’s Israeli flag. The report did not say whether he would also be tried for a hate crime.