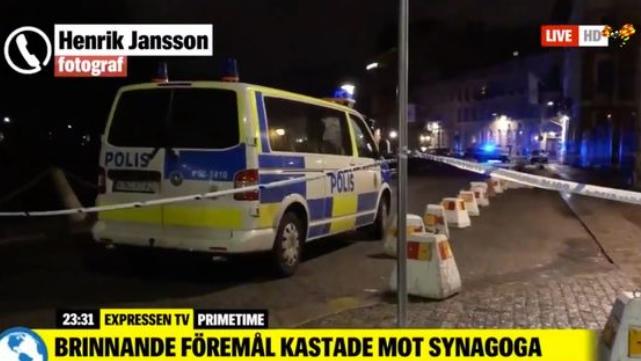 The incident, at a shul in Gothenburg, came after a march in the city against the United States’s decision to recognise Jerusalem as the capital of Israel.

A group of Jewish teenagers hid in a synagogue as the building was attacked by a gang of firebomb-throwing men last night.

The incident, at a shul in Gothenburg, came after a march in the city against the United States’s decision to recognise Jerusalem as the capital of Israel.

It is not thought anyone was injured in the attack, and the synagogue avoided major damage.

But a representative of World Bnei Akiva told the media that youth group members had been attending a party in the building and were forced to hide as the gang of around a dozen men threw firebombs.

Dvir Maoz told JTA he saw a “ball of fire” coming towards the building and security guards immediately called police.

The attackers had left before officers arrived and an investigation is now under way.

The Jewish children were collected and taken home by their parents.

On Thursday, an attack was carried out at a kosher restaurant in Amsterdam following US President Donald Trump’s announcement that the US would move its Israel embassy to Jerusalem and recognise the city as the capital.

The European Jewish Congress called on Sweden and other European countries to take strong action after the two incidents and a series of other protests.

Moshe Kantor, EJC president, said: “It is unconscionable that Jews are under attack on the streets of Europe, whether by terrorists hurling Molotov cocktails or openly and brazenly calling for the mass murder of Jews in Malmo, Vienna and Paris.

“We call on European governments to take strong punitive action against those who perpetrated these acts and call for the immediate arrest of anyone who makes anyone making murderous chants.

“It is highly morally objectionable to suggest that people want to murder a particular group because of a diplomatic statement, and no one would dare to suggest that any other group could justifiably be targeted because of what happens with a nation they are seen to be connected to.

“There is once again a double standard against Jews and anyone who suggests such an equation should be ashamed of themselves. Anyone who justifies antisemitic attacks on Jews, whether physical or verbal, places themselves in the category of an antisemite.”

Dr Kantor’s comments come as a new survey carried out by the European Union Agency for Fundamental Rights revealed that nearly a quarter of European Jews are afraid to identify themselves as Jewish.

The results showed that 60 per cent of Swedish Jews were scared to admit their religion, with 51 per cent of Jews in France and 45 per cent of Belgian Jews providing the same response.