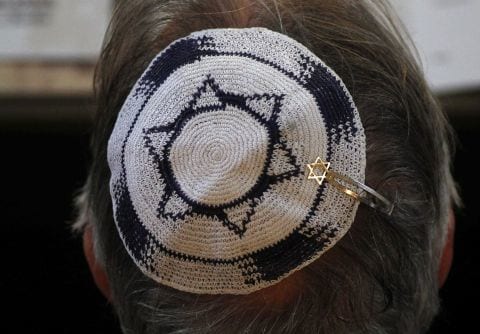 Germany’s capital was on track to or had already succeeded at becoming the favorite destination for Israelis coming to Europe, but a string of recent anti-Semitic assaults and incidents in Berlin is now triggering renewed fears among many Jews here.

In the latest incident, two men, 21 and 24 years-old, at least one of whom was wearing a Jewish kippah, were assaulted by an attacker whipping them with a belt in broad daylight in one of Berlin’s most gentrified districts, Prenzlauer Berg, on Monday. Three perpetrators were involved, according to the victims’ accounts, which could not be independently verified and no other videos or eyewitness accounts have so far been publicly reported.

Captured on video by one of the victims, the assault has sparked widespread condemnation, including from Chancellor Angela Merkel who called the incident “horrible.”

In the video, the attackers – whose nationalities or identities have not yet been established – can be heard yelling “Yahudi,” Arabic for Jew.

“Jewish or not – you have to be okay with it,” one of the victims eventually responds in German, as an unidentified woman shouts toward the attackers: “You’re in Germany here!”

One of the victims who identified himself as Adam Armoush later said that he was not in fact Jewish but had only worn a skullcap to prove to a friend that doing so wasn’t risky in contemporary Germany. “I was saying it’s really safe and I wanted to prove it, but it ended like that,” Armoush told German TV.

Once the situation got out of control, Armoush started to film.

“They started to get angry and one of them ran to me and I knew it was important to film it because there would be no way to catch him by the time police arrived,” he said.

Ever since Word War II, Germany has been the nation that is perhaps most committed to ensuring the safety of Jews outside of Israel. Since the fall of the Berlin Wall, the number of Jews in Germany has risen seven-fold, to an estimated 200,000. About half of them are part of Jewish communities.

Synagogues are guarded by the police at all times and anti-Semitic incidents usually trigger large-scale investigations. And yet, anti-Semitism hasn’t faded completely.

While conservative commentators and the far-right now mostly put the responsibility for a recent surge in publicly debated anti-Semitic incidents on the hundreds of thousands of refugees who entered the country since 2014, right-wing attacks on Jews are still far more common. “There’s anti-Semitism among German citizens, unfortunately, and also anti-Semitism from the Arabic-speaking region and the government will do everything (to tackle the issue),” German Chancellor Merkel said Wednesday.

Her remarks came a week after a report released by an Israeli university concluded that Jewish life around the world is under attack once again by “classic traditional antisemitism.” While acts of violent anti-Semitism dropped by 9 percent between 2016 and 2017, other incidents such as abuse and harassment are on the rise and have led to a “certain corrosion of Jewish life.” The study found that “Europe’s largest Jewish communities are experiencing a normalization and mainstreaming of antisemitism not seen since the Second World War.”

“There has been an increase in open, unashamed and explicit hatred directed against Jews. The Jew as exploiter, the Jew as killer, the Jew as banker. It is like we have regressed 100 years,” European Jewish Congress President Moshe Kantor was quoted as saying in a statement last week.

But measuring the extent to which that problem has also permeated German society is proving difficult, amid a lack of national and comparable statistics. Günther Jikeli of the University of Indiana found in a recent study that many refugees who come to Germany have not fully overcome the anti-Semitic attitudes that can be found among some in the Arab world. Even though such stereotypes may prevail, they don’t trigger anti-Semitic responses in most cases, Jikeli cautioned.

Researchers acknowledge that anti-Semitism exists both among refugees as well as native Germans, but they warn that public discourse has predominantly singled out Muslims – putting unfair blame on a group that sees itself faced with stereotypes and racism.

Far-right groups and the Alternative for Germany, or AfD, party have used publicly reported incidents to fuel anti-refugee rhetoric, blaming the attacks on Muslims, said Juliane Wetzel, of the Center for Research on Antisemitism at the Technical University in Berlin.

According to Wetzel, there is no quantitative evidence for either a trend in increasing anti-Semitic attacks or Muslim culpability for them, even though statistics show a rise in anti-Semitic incidents in Berlin last year and also indicate that attacks mount whenever tensions between Israel and the Palestinians escalate in the Middle East.

“(But) equating Jews with Israel isn’t limited to Muslims or refugees. It’s very widespread among the general population,” Wetzel cautioned.

The researcher believes that the rise in incidents in Berlin is connected to the introduction of an anonymous reporting mechanism, known as RIAS, which began collecting data just three years ago. “People were more reluctant to report on such issues but they’re now more ready to do that anonymously,” said Wetzel, who said that most Berliners were only now becoming aware of the reporting platform.

After Monday’s apparent attack, Armoush decided that an anonymous report wouldn’t be sufficient.

He went public, instead.