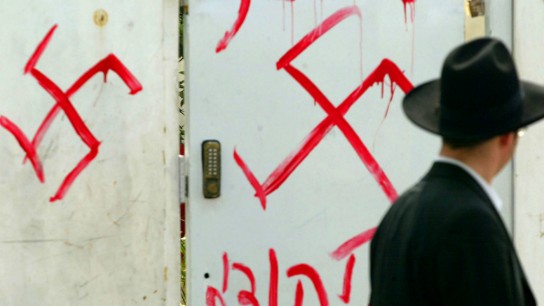 Number of violent attacks has fallen, but abuse and harassment are on the rise, annual report warns

The normalisation of anti-Semitism has reached levels not seen in Europe since the Second World War, according to a global report.

The annual study by researchers at Tel Aviv University, published on the eve of Israel’s Holocaust Remembrance Day, reveals a number of disturbing trends.

It describes “a toxic triangle made up of the rise of the extreme right, radical Islamism and a heated anti-Zionist discourse on the left,” the Associated Press reports.

While violent incidents targeting Jews worldwide decreased by 9% from 2016 to 2017, they appeared to grow more brutal, according to researchers.

“The lower incidence of violence was accompanied by a dramatic increase in harassment, especially in schools and on social media,” the Times of Israel says.

Researchers attribute the decrease to improved security in Jewish communities and fewer Jews identifying themselves as such in public. They also say the vast number of attacks go unreported.

This “is not necessarily perceived in Jewish communities as a sufficient positive development, because the presence of security measures means that they are a necessity,” the reports says.

And despite the overall drop, attacks rose in many countries, including in the US, where anti-Semitic incidents surged by 57% in 2017, according to the Anti-Defamation League.

There has been an increase in “open, unashamed and explicit hatred directed against Jews” and a resurgence of familiar anti-Semitic tropes, says Moshe Kantor, president of the European Jewish Congress, an umbrella group representing Jewish communities on the continent.