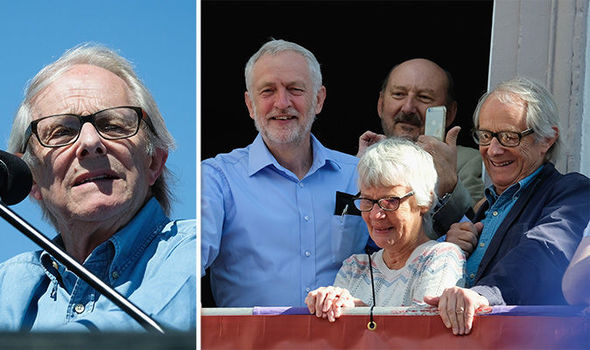 Jeremy Corbyn’s film maker supporter Ken Loach has called for Labour MPs who protested against anti-Semitism to be kicked out of the party. The left-wing filmmaker accused those who supported the protest by Jewish leaders outside Parliament of “dirty tricks”.

His controversial intervention comes after hundreds descended onto Parliament to protest against Mr Corbyn over claims the Labour chief is not going enough to deal with allegations of anti-Semitism within his party.

Mr Loach, who created Mr Corbyn’s campaign videos for last year’s general elections, said: “Unless we get Labour MPs who believe in that manifesto last year we won’t get in power.

“If they’ve been going to the demonstration against him outside Westminster, those are the ones we need to kick out.”

He accused the Labour MPs who attended the demonstration, including Wes Stressing, Liz Kendall, John Mann and John Woodcock, of undermining the embattled leader.

Mr Loach said: “You cannot work with people who have come to undermine the biggest challenge we’ve had – we’ve never had a leader like Corbyn before in the whole history of the Labour Party and that’s why the dirty tricks are going to come out.”

The I, Daniel Blake, film director went on to accuse the Israeli government of “infiltrating and undermining the Labour left”.

Labour MPs have revealed they have already been targeted by online abuse for attending the Enough is Enough protest organised by the Board of Deputies and the Jewish Leadership Council.

Thangam Debbonaire told how she was “bullied, barracked and laid into” by her constituents for attending the anti-Semitism rally.

Labour MP Jess Phillips, who also attended, took to Twitter today to directly address Mr Loach over his comments, saying: ”Dear Ken, this month I’ve helped 30+ people have disability benefit reinstated because I have a specialist surgery to help with tribunals.

“I save Daniel Blake’s, but yeah because I hate racism I’m the problem. Get rid of me if you want, like some entitled dude who makes demands.”

It comes as the boss of the European Jewish Congress hit out at Mr Corbyn over his failure to stamp out anti-Semitism in his ranks.

Moshe Kantor said: “His followers and supporters openly share on social media some of the most malevolent Holocaust denial and international Jewish banking conspiracies reminiscent of the Protocols of the Elders of Zion.

“It leads us to believe that this normalisation of Jew-hatred has reached the highest levels.”

Jeremy Corbyn has previously apologised for the “pain and hurt” caused by instances of anti-Semitism in his party.

He said: “I recognise that anti-Semitism has surfaced within the Labour Party, and has too often been dismissed as simply a matter of a few bad apples.

“This has caused pain and hurt to Jewish members of our party and to the wider Jewish community in Britain. I am sincerely sorry for the pain which has been caused, and pledge to redouble my efforts to bring this anxiety to an end.

“I must make it clear that I will never be anything other than a militant opponent of anti-Semitism.”