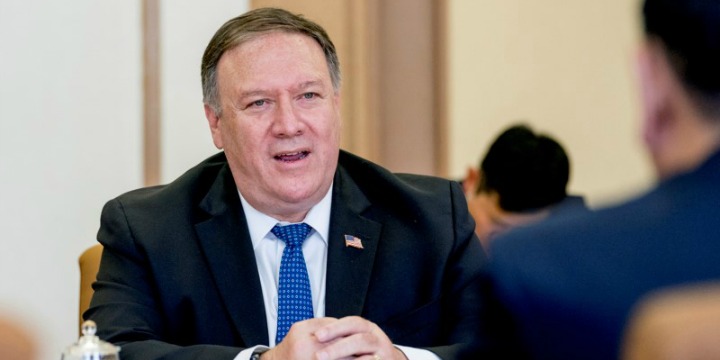 US Secretary of State Mike Pompeo cautioned on Thursday against efforts in various European countries to curtail religious practices sacred to Jewish and Muslim communities, including male circumcision and ritual slaughter of animals for consumption.

Asked about recent legislative efforts to curb these traditions in Iceland, Belgium and Austria, Pompeo said regarding those and other similar initiatives around the world, “We believe that religious intolerance is unacceptable, and frankly we’ll be making the case that religious freedom benefits nations.”

His remarks were made to a small group of journalists ahead of the State Department’s summit next week on religious freedom. The event – the first of its kind – will see more than 80 delegations participating, over half at the foreign minister level, Pompeo said.

The purpose of the event, he added, was to show the world that “America highly values religious freedom and that we are going to seek from every nation, every single nation, to improve religious freedom inside their own country.” The issue of religious freedom, he said, has now been raised to a “real priority” for the United States.

Among those in attendance will be representatives from the Middle East, Pompeo said, a region rife with religious persecution. It was unclear which countries in the region would be joining and a full list of participants will only be released at the conclusion of the summit.

The United States is also hopeful that its recent diplomatic engagement with Russia “puts us in the direction” for conversations to improve religious liberty in the country. In April last year, the US Commission on International Religious Freedom ranked Russia alongside 16 other “countries of particular concern,” including Iran, Saudi Arabia, Syria and North Korea. Russian policies mentioned in the report include administrative harassment, arbitrary imprisonment and extrajudicial killing.

The conference itself, running from July 24th-26th, will feature remarks from Pompeo, Vice President Mike Pence and a number of yet unnamed survivors of religious persecution. Efforts to tamper with various Jewish practices have emerged repeatedly in recent months, especially in Western Europe.

In May, the European Jewish Congress (EJC) reacted furiously to the decision of the parliament in the Walloon region of Belgium to ban the slaughter of animals according to the religious requirements of Jews and Muslims. The move was described by EJC as the “greatest assault on Jewish religious rights in Belgium since the Nazi occupation of the country in World War II.”

In Austria, a proposal earlier this week sought to require Jews to register with the government in order to purchase kosher meat. The move was similarly panned by Jewish leaders.

Similar efforts have been launched in other Western European countries as well, including Denmark, Portugal and Switzerland.

In response, said Pompeo, the State Department’s strategy will be to appeal to the interests of countries. “Having a religiously diverse country where individuals can practice their faith, or if they choose not to have faith and to live in the way that they choose, benefits those countries,” he said. “When everyone leaves Washington next week following this three-day gathering we hope that they will return to their home countries, strengthened in their understanding that religious freedom is good for their nations as well.”