I Stand By Those Remarks!’ MP Refuses To Back Down After Branding Corbyn ‘Anti-Semite’ 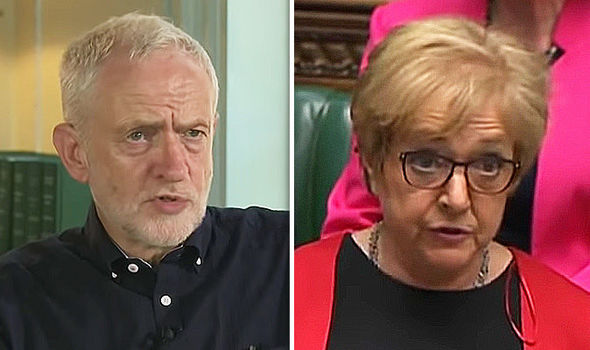 Labour MP Margaret Hodge refused to back down after she branded Jeremy Corbyn an “anti-semite” for his failure to address growing concerns of anti-semitism within the party.

Dame Margaret Hodge refused to budge after branding Labour leader Jeremy Corbyn an “anti-semite” over his failure to address the anti-semitic row within the party.

The opposition leader has been facing increasing pressure from the Jewish community and Jewish MPs to include a clearer definition of anti-semitism in Labour’s newest code of conduct.

Dame Margaret, who is facing disciplinary action because of her attack against Mr Corbyn, told the Today programme: “I stand by those remarks.

“Honestly, it’s with a heavy heart. I don’t want to be in this position, nobody would be happier than I would be for Jeremy to say tomorrow, and the Labour party to say, ‘we’ll adopt this in full.”

The party scrapped two elements of the internationally accepted definition for anti-semitism included in the International Holocaust Remembrance Alliance (IHRA) from their code of conduct.

The Labour MP continued: “I’ve always, in the past, disagreed with the people who’ve called him an anti-semite but at the end of the day people have to be judged on what they do and not on what they say.

The party’s ruling body approved a new code of conduct on anti-semitism despite intense criticism from the party’s MPs and peers as well as Jewish leaders.

Labour’s National Executive Committee signed off the code at a meeting on Tuesday but members agreed to reopen the development of the policy in recognition of the “serious concerns” raised.

Labour officials drew up the code in the wake of protests by Jewish groups outside Parliament earlier this year.

The new charter states that criticism of the state of Israel and its policies should not automatically be regarded as anti-Semitic, and makes clear that even “contentious” comments on this issue “will not be treated as anti-Semitism unless accompanied by specific anti-semitic content or by other evidence of anti-Semitic intent”.

A Labour party spokesperson said: “Jeremy Corbyn is a militant opponent of anti-semitism, and he and the Labour Party are committed to eradicating antisemitism in all its forms, both from our party and across society.”

In a statement, Dr Kantor said: “The British government was one of the first to adopt the IHRA definition and, having apparently accepted the definition, it is disappointing that Labour is now backtracking on some of its crucial provisions.

“The Labour Party under the leadership of Jeremy Corbyn continues to demonstrate an inability to confront hatred, prejudice, xenophobia or Antisemitism. Disregarding the IHRA definition shows a baffling disdain for British Jews on the part of the party leadership.

“We call upon them to reconsider their position and in doing so, to offer reassurance that the Labour Party can continue to be a party that respects equality for all.”