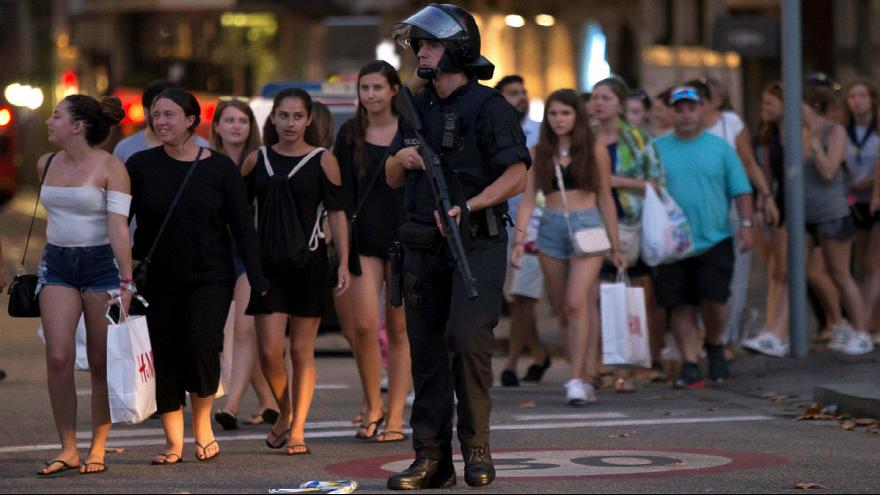 With thousands of Israelis currently on vacation in Barcelona at the height of the summer tourism season, Jerusalem carefully monitored the situation there following Thursday’s terrorist attack, trying to track down all Israelis believed to be in the area.

As of 9:30 p.m. Israeli time, the Foreign Ministry put the number of Israelis who had not yet made contact with relatives in Israel at 31, and said there was no immediate indication that any Israelis were injured in the attack, which took place in the vicinity of the Maccabi kosher restaurant.

Prime Minister Benjamin Netanyahu, who is also the country’s foreign minister, went to the ministry’s situation room soon after the attack to monitor developments and speak by video conference with Israel’s ambassador in Madrid, Daniel Kutner.

Netanyahu “strongly condemned” the attack, saying that “tonight we saw again that terrorism strikes everywhere, and the civilized world must fight it together to defeat it.”

The Israeli Embassy dispatched a delegation of three diplomats to Barcelona in case any of the Israelis there were in need of assistance.

Chief Rabbi of Barcelona Meir Bar-Hen said that all community events would be canceled, and that he was headed to the scene of the attack to offer his services. Bar- Hen said that it did not appear that Jews were targeted.

“Our hearts are with the victims and we wish them a full and speedy recovery,” Bar-Hen said, adding that the Jewish community has faith in the Spanish security forces, “which are doing all they can to secure the community’s institutions.”

Victor Sorenssen, the spokesperson for the Jewish community of Barcelona, told The Jerusalem Post that the Jewish institutions in the city were following the recommendations of the authorities to close for the next 24 hours as a precautionary measure. He expected that the synagogues would reopen by Shabbat.

“There’s a lot of confusion beyond the sadness and the shock,” he said, noting that this is the first terrorist attack Barcelona has seen in many years, the last one carried out by Basque terrorist group ETA.

“So people are pretty scared… people aren’t used to it,” Sorenssen said, noting the similarity of Thursday’s attack with attacks that have struck other European cities in recent months.

Sorenssen echoed Bar-Hen’s remark that the kosher restaurant did not appear to have been a target of the attack.

“I think it was not a target of the attack because in Las Ramblas there are all kinds of restaurants in the area… at least from what we know there is no relation.”

He said that he did not expect that the Jewish institutions would increase their security measures as they are already guarded by police and private security.

Avigayil Heimowitz, an Israeli tourist, was close to the scene of the attack when it happened. “I just saw people begin to run and so I ran too, without knowing what was happening,” she told the Post.

She described a scene of hysteria, and a high presence of police and helicopters.

Her friend, Avital Stein, had been shopping at a store nearby, when the shop suddenly closed.

“I saw people running and didn’t understand [what was happening] until the store I was in just decided to close,” she told the Post. “I asked what was going on and he [store employee] said there was an attack.”

A Chabad representative told the Post that his institute is located close to the scene of the attack, and that members of the Chabad staff were trying to reach the area to see if they were any Jewish casualties but that the police would not let them enter.

“If there are Jews there, we will try to find them and help them however we can,” he said. “We are waiting for the incident to be over.”

He confirmed that all Jewish institutes had closed until they received further instruction.

Rabbi Dovid Libersohn, director of Chabad Lubavitch de Barcelona, which provides kosher certification to Maccabi, called it “a terrible situation,” and said “we pray for the injured and for the families of those who were killed, and we are grateful, thank God, that nobody at the restaurant was harmed.”

Magen David Adom spokesman Zaki Heller said that “from the moment we received reports of the terrorist attack in Barcelona, Magen David Adom has been in contact with the Foreign Affairs Ministry, the Red Cross and the security wing of Chabad. At this moment, it is not known whether Israelis or Jews were wounded in the attack,” but that MDA was prepared to swiftly dispatch any medical response that may be required, as it has done in similar incidents.

Shaul Hemo, CEO and owner of ART Tourism, spoke with The Israel Project about his experience at the Starbucks on the open pedestrian mall Las Ramblas, where the attack occurred.

“We have 600 Israeli clients all over the city,” Hemo said.

He himself was among the scores of Israelis who were in Las Ramblas at the time of the attack, many of whom ran into nearby stores for safety and were then locked in for over an hour by the police.

“It was about 5 p.m. lunch time and it was crowded,” Hemo said. “I was in Starbucks. I saw a lot of people running, hysterical, panicking. A car just smashed the people on the street. We are not used to it; it is the first time there was a terrorist attack in Barcelona.”

Limor Hasson told Channel 2 that she was in the Maccabi restaurant at the time of the attack.

“We had gone in to eat,” she said. “A woman came in and started yelling that there had been a terrorist attack. I understood it was a vehicular attack and they locked us in.”

Deputy Foreign Minister Tzipi Hotovely quickly condemned the attack in Barcelona, posting on Twitter: “I condemn this deplorable act of terror and senseless death, and stand with Spain with prayers for the fast recovery of the victims.”

“I conveyed to him my condolences and prayers for the wounded, and made it clear that the Ministry of Diaspora Affairs would aid the community in any way possible,” Bennett said. “At times like this, it is important to understand Islamic terror is attacking the values of freedom and democracy, in Barcelona, London, Paris and Jerusalem. The West must stand strong in the face of terror and defeat it wherever needed.”

“We are yet again witness to another terrorist attack in Europe perpetrated against innocent civilians,” said congress president Dr. Moshe Kantor. “They are choosing to strike again at our zest for life and our basic freedoms with their cult of death. It is becoming increasingly difficult to prevent this abuse of regular vehicles as their chosen instrument of murder. We stand with the Spanish people, and urge the authorities to bring to justice those who perpetrated this savage attack, including those who inspired it and those whose incitement encouraged it.”

Speaking on behalf of the Jewish communities of Europe, the organization said it extends its deepest condolences to the families of the victims and wishes a speedy and full recovery to those injured.

World Jewish Congress president Ronald S. Lauder said: “Our thoughts and prayers are with the victims of this attack and their families, and with all the people of Barcelona.

“We are monitoring the events as they unfold with care and concern, and are in touch with the local Jewish community and its security groups. We pray that there will be no more victims.”

The Board of Deputies of British Jews released a statement, with senior vice president Richard Verber saying: “We utterly condemn this brutal attack by terrorists intent on murdering and maiming innocent pedestrians in Barcelona. People of all faiths and none must come together to defeat this evil.”

The Simon Wiesenthal Center condemned the attack as well as its “apparent anti-Jewish component,” despite other indications that the kosher restaurant was not the target.

“It is still unclear if this was a cell of “lone wolves” or terrorists trained by ISIS, but the brutal targeting of tourists and Jewish institutions follow a pattern of attacks that include Paris’s Hyperkasher Supermarket and the Brussels Jewish Museum,” center officials said.

“We grieve for the families of the innocents, whatever faith or nationality, and urge Spanish authorities to secure Jewish institutions in their country,” it added. “It is also past due for the European Union and their member states to acknowledge and take action to curb burgeoning antisemitism in the mainstream of their societies and across the Internet.”