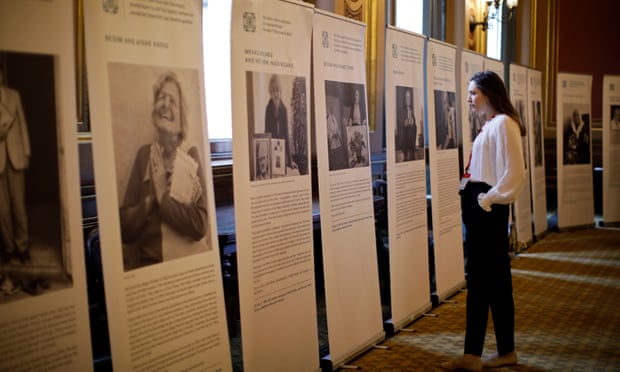 One in 20 British adults does not believe the Holocaust happened, and 8% say that the scale of the genocide has been exaggerated, according to a poll marking Holocaust Memorial Day.

Almost half of those questioned said they did not know how many Jews were murdered in Nazi death camps, and one in five grossly underestimated the number, saying that fewer than two million were killed. At least six million Jews died.

The poll, commissioned by the Holocaust Memorial Day Trust, a charity established and funded by the UK government to promote and support the international day of remembrance, echoes the findings of a survey carried out in seven European countries in November.

The scale of ignorance about the Holocaust has shocked experts. Olivia Marks-Woldman, of the Holocaust Memorial Day Trust, said: “I must stress that I don’t think [the poll respondents] are active Holocaust deniers – people who deliberately propagate and disseminate vile distortions. But their ignorance means they are susceptible to myths and distortions.” The Holocaust is taught in schools as part of the history curriculum, but “that might only be one lesson”, she added. “And people who are middle-aged or over may never have been taught about it.”

Steven Frank, who was one of only 93 children to survive the Theresienstadt camp, said: “I find these figures terribly worrying. In my experience, people don’t have a solid understanding of what happened during the Holocaust and that’s one reason I’m so committed to sharing what happened to me.

“At one of my talks, I met someone who said the Holocaust didn’t happen. The only way to fight this kind of denial and antisemitism is with the truth – I tell people what happened, what I saw and experienced. If we ignore the past, I fear history will repeat itself.”

Education was vital in the fight against ignorance and hate, said Karen Pollock of the Holocaust Educational Trust. “One person questioning the truth of the Holocaust is one too many, and so it is up to us to redouble our efforts to ensure future generations know that it did happen and become witnesses to one of the darkest episodes in our history.”

The trust’s poll also found that 83% of those questioned said it was important to know about the Holocaust, and 76% believed more needs to be done to educate people.

Holocaust Memorial Day will be marked by a national commemorative event in central London on Sunday, attended by senior politicians, faith leaders and survivors. More than 11,000 activities and events are planned across the UK.

Yesterday Rachel Riley, the Countdown presenter, said she was to be given extra security on the show after receiving online abuse over her comments on antisemitism in the Labour party. The mathematician, who is Jewish, told the Times: “With the hashtag Get The Tories Out or the red rose or hashtag JC4PM, they say to me: ‘You’re only calling out the left’. Well, I’ve been attacked by people on the left and the best way to not have me talk about antisemitism on the left is not to be antisemitic.”

The remembrance day will also mark the 25th anniversary of the Rwandan genocide, which began in April 1994, and 40th anniversary of the Cambodia genocide’s end. Moshe Kantor, president of the European Jewish Congress, said: “As each year the number of Holocaust survivors able to share their personal testimony diminishes, our responsibility to honour their experience, to educate the uninitiated grows ever greater if we are to ensure that Jews can live as safely as all other European citizens.

“On 27 January, the world will unite to remember all the victims of the Holocaust – let their voices give us the call to action we need to work together, united, to ensure the future of the Europe we know.”