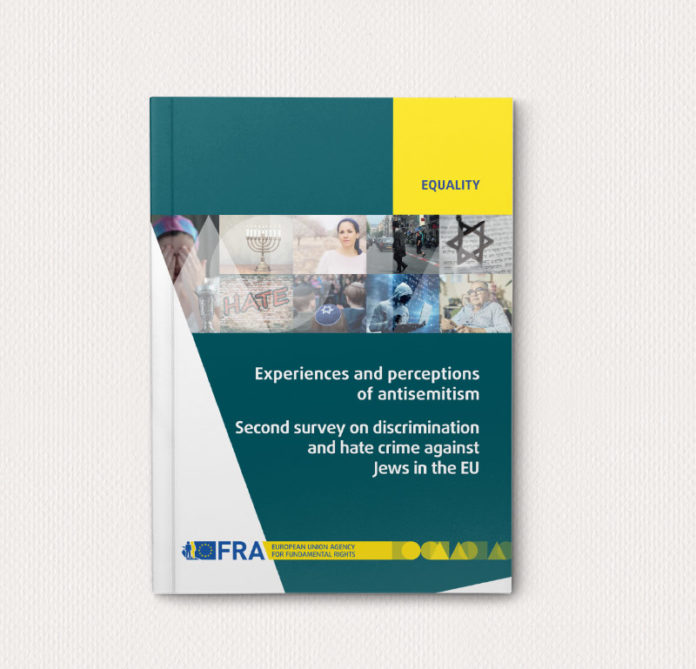 Close to 40 per cent of European Jews have considered leaving their home countries over the past five years because of rising anti-Semitism, according to a poll released on Monday.

The survey, which was conducted by the EU agency for fundamental rights (FRA), highlights growing concern among Jewish communities in Europe, with almost 90 per cent of respondents saying that anti-Semitism has increased since 2013.

The Jewish community in France – which has suffered a number of high-profile deadly attacks in recent years – appears to have been especially shaken: almost 80 per cent of French Jews told pollsters that anti-Semitism in the country had “increased a lot”, the highest proportion in Europe. But there was also a marked deterioration in Germany, where 44 per cent of Jews said they had thought about emigrating, up from 25 per cent five years ago.

“Decades after the Holocaust, shocking and mounting levels of anti-Semitism continue to plague the EU,” Michael O’Flaherty, the director of the FRA, said in a statement. “Member states must take note and step up their efforts to prevent and combat anti-Semitism. Jewish people have the right to live freely, without hate and without fear for their safety.”

According to the FRA poll, however, that ideal is far from the reality of Jewish life in Europe today. It found that 28 per cent of European Jews experienced anti-Semitic harassment over the past 12 months, including offensive and threatening comments, offensive gestures or offensive comments on social media. That number was especially high in Germany, where 41 per cent of respondents said they had suffered anti-Semitic harassment over the past year.

“The survey findings suggest that anti-Semitism pervades the public sphere, reproducing and ingraining stereotypes about Jews,” the FRA notes in the report. The agency also points out that “people face so much anti-Semitic abuse that some of the incidents they experience appear trivial to them . . . respondents report very few experienced incidents of anti-Semitism to the police or other institution[s]”.

Moshe Kantor, president of the European Jewish Congress, said Monday’s report demonstrated: “an increasingly intolerable level of pressure and abuse that Jews feel in Europe today. They feel that despite European leaders’ commitment to combating anti Semitism the situation has not improved, in fact it has deteriorated over the last few years.”

He added: “Many European Jews are extremely concerned for the future. They have lost faith in the authorities, in their neighbours and in their national leaders and this has led not only to a crisis in their relations with them, but are wavering between two extreme actions, emigration and cutting themselves off from their Jewish community.

Concern over the rise of hatred against Jews prompted the German government earlier this year to appoint a special commissioner tasked with combating anti-Semitism. Berlin also announced plans to establish a national database for anti-Semitic incidents.

The FRA survey covers 12 European countries that together are home to 96 per cent of the Jewish population in the EU. More than 16,000 Jews took part in the poll between May and June 2018.