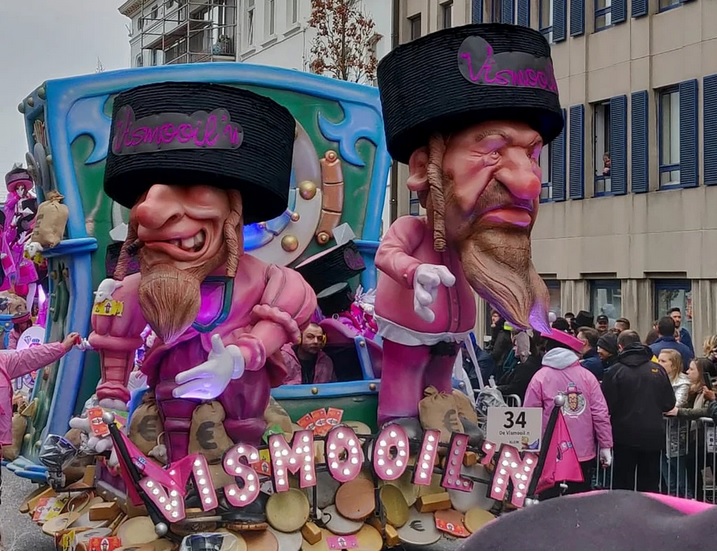 In Aalst, a small city northwest of Brussels, the Carnival parade is the main event of the year, where everyone and everything is mercilessly mocked, and drunkenness and a lack of taste are part of the mix.

But this year, floats that the townspeople regarded as the customary shameless satire of their famed Carnival set off an uproar. One float in the parade on Sunday carried two giant figures of Orthodox Jews, with side curls and grotesquely large noses, sitting on bags of money. Another group paraded in the white hoods and robes of the Ku Klux Klan.

At a time when expressions of anti-Semitism and racism are on the rise in many countries, images of the event quickly spread around the world, unleashing accusations of bigotry and historical ignorance.

Some critics began an international campaign to push Unesco, the United Nations’ cultural organization, to withdraw its official recognition of the Aalst Carnival – one of Europe’s largest – as a “cultural heritage” event.

The controversy has revealed the wide sensitivity gap between some Belgian revelers inured to such blatant ethnic caricatures, and outsiders attuned to calling out racism and anti-Semitism.

“It’s shocking beyond belief that within living memory of the Holocaust a Carnival parade in Europe would peddle such vile anti-Semitism,” said Daniel Schwammenthal, director of the Brussels-based office of the American Jewish Committee.

The condemnation has stung the mayor and residents of Aalst, who defended the displays as all in fun and the typical vulgar fare for their Carnival.

“There are absolutely no bad intentions that lay at the basis, and I say this with the greatest respect for the Jewish community,” Mayor Christoph D’Haese said in a debate with a representative of the Belgian Jewish community on national public television on Wednesday.

“The images are limited in time and space, and that’s important,” Mr. D’Haese said, adding that he would never allow such displays on any other occasion. “This was not an anti-Semitic deed before or after the parade; it was within the parade.”

The Carnival parade in Aalst, Belgium, features more than 40 folkloric groups with elaborate costumes and floats.

Yet by Friday, more than 8,000 people had signed a petition on Change.org calling on Unesco, the United Nations Educational, Scientific and Cultural Organization, to cut its ties with the Aalst Carnival.

Ernesto Ottone Ramírez, a deputy director at Unesco in Paris, said in an interview on Friday, “Unesco will ask that a discussion on this particular case will take place.”

He added that there should be broader discussion of whether Unesco’s cultural heritage recognitions “are still in accordance with Unesco’s mandate, and if not, whether their recognition should be revoked.”

He condemned the floats, saying in an earlier statement: “The satirical spirit of the Aalst carnival and freedom of expression cannot serve as a screen for such manifestations of hatred.”

But this isn’t the first time Unesco has been aware of an offensive float in the parade.

In 2013, Unesco condemned a display by a group that dressed up as Nazi officers, carrying what were made to look like cans of the gas used in concentration camps, and parading alongside a float evoking the trains that carried Jews to their deaths. The group said it was making fun of the mayor of Aalst, a Flemish nationalist.

Carnival in Aalst, which has its roots in the Middle Ages, grew into one of the biggest such events in Europe over the past two centuries, in part because of its popularity among the city’s working-class citizens, who reveled in voicing their frustrations with local factory owners and the church, historians say.

The parade, which takes place on the Sunday before Lent, is the pinnacle of a three-day feast.

Bert Kruismans, a comedian from Aalst who has written several books on Belgian history and culture, said that every year, more than 40 local folkloric groups raise about 50,000 to 100,000 euros each to create their displays. The floats, costumes, dances and music are often brutally satirical and politically incorrect, Mr. Kruisman said. (Some of the figures in this year’s parade can be seen in the clip above, part of a longer video.)

Over the years, the targets of satire have included local and international political figures, monarchs, Nazis and members of minority groups, invariably depicted with exaggerated facial characteristics.

The most popular theme is that of the “Voil Jeanetten,” Aalst dialect for the “Dirty Sissies,” which are men dressed up in whatever provocative female clothing they can find at home.

This year, another Carnival group dressed up as members of the Ku Klux Klan in order, they said, to satirize Guy D’haeseleer, a far-right city councilor in the nearby town of Ninove.

The parade included people wearing Ku Klux Klan robes, who said they were skewering a mayor in another town who was accused of racism.

That town is home to the brewery of the Witkap-Pater beer, which has a logo depicting a monk with a white hood. Mr. D’haeseleer was accused during a local election campaign last year of having spread racist propaganda, because of an earlier social media post in which he referred to black people as “chocolate mousse.”

Other marchers in the parade painted their faces black and wore bakers’ outfits with the logo of Mr. D’haeseleer’s political party on their chests. Another group in blackface wore Muslim head coverings and dressed up as chocolate bars.

Mr. D’haeseleer attended the Aalst parade and said he thought the displays were funny, “playful and well done.”

“The anger of the Jewish community is completely absurd,” Mr. D’haeseleer said in a telephone interview on Friday. “I think it’s squeamish of those people that they feel targeted again. This is much ado about nothing, I think they totally blew this up and hereby undermine the particularity of Carnival.”

He added, “This is taking political correctness too far.”

Europe’s religious and civic leaders said that especially in the European context, such a defense is unacceptable. Carnival depictions of Jews have often been more than just innocent merrymaking, they said.

“The sight of anti-Semitic caricatures surrounded by money is indistinguishable from imagery used by the Nazis and is grossly offensive in a country where 25,000 Jews were murdered in the Holocaust,” said Moshe Kantor, president of the European Jewish Congress.

This year, a group called De Vismooil’n created the float with the offensive Jewish figures. None of their members could be reached for comment.

But Mr. Kruismans, the Aalst comedian and historian, said De Vismooil’n used the caricature of the rich Orthodox Jew who saves all of his money for the future to make fun of the group’s own money problems. The group decided to save money on this year’s float in order to spend more next year and have more chance of winning the annual competition, a practice known in local folkloric parlance as taking a “sabbatical.”

To save money, Mr. Kruismans said, the figures depicting the Jews with the exaggerated facial expressions were reused from previous years, when they had been dressed before as non-Jewish characters.

“This was not an orchestrated anti-Semitic propaganda campaign,” Mr. Kruismans said. “It was born out of thoughtlessness and an ill-advised attempt to recuperate an age-old caricature that bares latent anti-Semitism within it for the purpose of humor. And nobody thought it was funny, by the way.”

But as part of its official application to join this year’s parade, the De Vismooil’n group wrote: “To save a little penny for next year, we’re taking a Sabbath year. Come and see our little safes during the parade, and you may see our mice save for next year. Love you, bye-bye and most of all don’t forget: Shalom!”