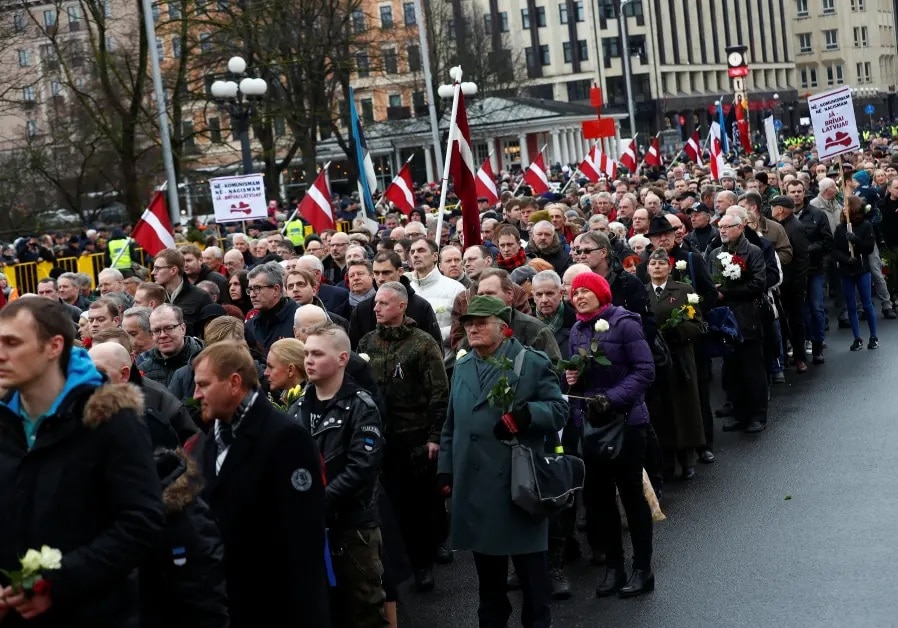 Veterans taking part in the march were supported by a large group of people holding Latvian flags, flowers and signs, while some also wore military uniforms sporting swastikas and Nazi SS insignia

For the 19th year in a row, about 1,000 people took part in a march commemorating Latvian Legion, who were Nazi collaborators that volunteered with the SS-Waffen brigade during World War II, in the country’s capital Riga on Saturday.

Veterans taking part in the march were supported by a large group of people holding Latvian flags, flowers and signs, while some also wore military uniforms sporting swastikas and Nazi SS insignia.

Some of the veterans and their supporters also wore Nazi scarves or black leather jackets, which had red and black swastika patches stuck onto their sleeves.

Despite concerns that there would be clashes between demonstrators and those opposing the controversial march, police said no violence had been reported.

Several people stood behind the barriers holding signs in protest to the commemoration march, which read that “They fought with Hitler,” “If they looked like Nazis, and acted like Nazis – they were Nazi” and “the Legion Waffen is a criminal organization.”

Some 140,000 people volunteered or were forcefully drafted into the Latvian Legion during the Second World War. The Legion denies it was involved in any Jewish massacres during the Holocaust, however, this claim is contrary to evidence that has been found.

The Nazis and their collaborators murdered close 70,000 Jews who had lived in Latvia before the Holocaust. It’s believed that unknown number of Latvian Waffen SS soldiers may have been involved in the murder of Jews as auxiliary police, years before they entered the front-line unit, which was formed to fight the Red Army. The day commemorates those who fell during battle against the USSR in 1944.

The Latvian government have claimed in the past that the Latvian Legion was not really an SS unit and that “the legionnaires who weren’t forcefully conscripted merely sought independence for Latvia when they joined Hitler’s army.”

The controversial demonstration, which has taken place every March 16 since 1990, has been criticized heavily over the years with groups and organizations saying that the march glorifies Naizsm.

Last year, Latvia Without Fascism, who were barred from holding a counter protest said the fact this event was taking place in Europe today “was a disgrace.”

In 2017, European Jewish Congress president Moshe Kantor slammed the commemoration march. “The inaction of Latvian authorities in this case is both bewildering and alarming… Peace in Europe and the education of future generations are not possible to ensure without openly condemning the glorification of Nazism.

“Indulging neo-Nazis could lead to a chain reaction of socially dangerous processes among increasing numbers of people in Europe,“ he said at the time.

In 2012, the Council of Europe’s Commission against Racism and Intolerance published its report on Latvia (fourth monitoring cycle), in which it condemned commemorations of persons who fought in the Waffen SS and collaborated with the Nazis.

The ECRI expressed concerns as regards to the authorization of a gathering, commemorating soldiers who had fought in a Latvian unit of the Waffen SS, that takes place every year on 16 March and is held in the center of Riga, and expressed dismay at the authorization by the competent courts of an event set to celebrate the Nazi occupation of Riga.