Tolerance And Unity Cannot Become The Next Victims Of Terror Attacks 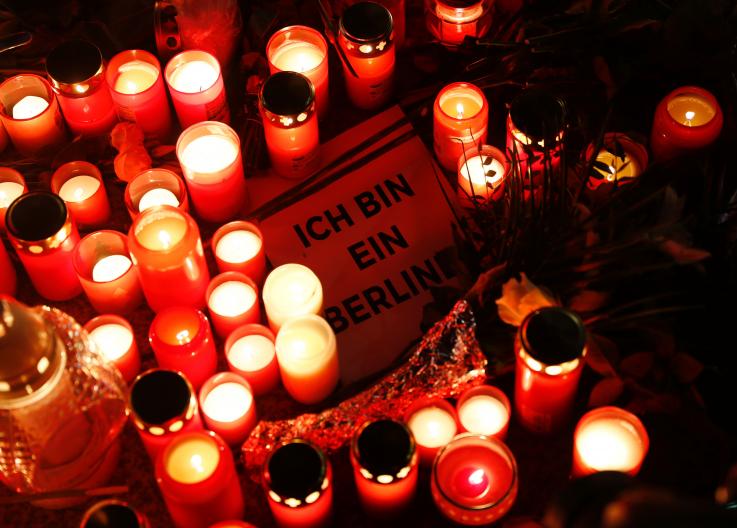 If we allow other people to strip away our values, we will be doing the terrorists’ jobs for them

Among the flowers placed in the debris of Berlin’s Breitscheidplatz Christmas market is a note that reads ‘Keep living, Berliners.’

Such a show of defiance and solidarity in the wake of a tragedy like the one we witnessed on Monday will always confound terrorists. That no matter where they strike, decent people will always pull together in the face of adversity.

A sign quoting John F Kennedy’s sentence ‘I am a Berliner’ lies inmid candles at a makeshift memorial in front of the Kaiser-Wilhelm-Gedaechtniskirche (Kaiser Wilhelm Memorial Church), two days after an attack at the nearby Christmas market in central Berlin, on December 21.

But this time, the divisions that have been growing in Europe over the past three years have meant the fault lines between communities have widened, putting our fundamental values of respect for human rights, freedom and equality in grave jeopardy.

Barely had the families of the dead been able to digest the first reports of this atrocity when our social media and online chat forums were hijacked by those intent on using the tragedy to spread racist hatred and bigotry. “These are Merkel’s dead,” tweeted one German MEP.

Thankfully, with each new post, those who called for unity against the scourge of extremism did far more to strengthen our communities than those who sought to flood online channels with hate.

But it has highlighted an important lesson that, especially in times like these, when our defences are being challenged and innocent civilians targeted, we must vigorously resist those who would take advantage of our fear. It is crucial that all people of all faiths unite to make this happen.

Pushing our governments into a corner where they are forced to weaken their resolve to uphold values of tolerance and unity ultimately leave us more exposed—not just to terrorists, but to extremists inside our borders.

It is too early to know the drivers of Monday’s attack, but already ISIS will be celebrating the prejudice and bigotry that has been displayed online in the last 72 hours as proof that our society and values are vulnerable, that they can be undermined by a few well-placed attacks. The extreme far-right also benefits, using such attacks to legitimise fear and hatred of entire communities.

As we share the grief of those mourning the victims, we must also face the reality that Europe will continue to be targeted by terrorists for some time. The similarities between the attack in Berlin with that in Nice, when a 19-tonne cargo truck was deliberately driven into crowds celebrating Bastille Day, shows that it can happen anywhere.

Between July and September, the Centre on Religion and Geopolitic’s Global Extremism Monitor recorded 39 religious extremist groups insti­gating 662 incidents in over 41 countries, killing thousands. The underlying cost is that it has also shattered the economic and social opportunities of millions more.

Today, governments across Europe are revisiting their security arrangements. Border controls will be tightened, and the EU will step up the activities set out after the Paris attacks in 2015 to combat illegal arms trafficking and target terrorist financing.

But we must not be distracted from the task of preventing the growing rifts within our own communities. The rise of the far-right across Europe only makes this more important.

A month before we mark the anniversary of the liberation of Auschwitz in January 1945 with Holocaust Memorial Day, we should need no reminder of what happens when evil and hate dominate Europe.

The U.K. government’s strong response to the Home Affairs Select Committee on antisemitism is aimed at combating the surging levels of hate crime. Our leaders in Europe must follow their lead. If politicians do not recognise the scale of the problem, they cannot properly confront the dangers that haunt them.

We need greater intelligence-sharing, more resources for law enforcement agencies and to provide them with the strong powers required for action. We must also work with the social networks to deny extremists—as well as terrorists—of the oxygen they need to spread their propaganda.

To achieve our common goal, we do not only need national efforts and a coordinated international response to eradicate terrorists from the face of the earth; we need civil society to come together. Fighting the rising tide of hate is everyone’s responsibility. Lashing out at Chancellor Angela Merkel, at Muslims and at refugees only serves to create further internal conflict at a time when we need to work together. People need to call out the perpetrators of online abuse and challenge racism, xenophobia, religious intolerance wherever it presents itself.

The European Council on Tolerance and Reconciliation’s Model Law on the Promotion of Tolerance, which we proposed to the European Union, states that schools, from the primary level upwards, should introduce courses encouraging students to accept diversity and promote a climate of tolerance towards the qualities and cultures of others.

Inevitably, people are afraid of what they don’t understand. Tolerance can only come with understanding different perspectives, cultures, traditions and ideas, and this requires meaningful integration from all parties.

However, even tolerance has its limits and it is vital today that we also say loudly and clearly that we have a zero tolerance of hateful and harmful acts. No democracy needs to demonstrate its vitality through its destruction.

Yes, the style of the attack in Berlin points to Islamic extremism, and in the wake of the migrant crisis, it is perfectly legitimate for people to expect those seeking shelter and protection in our countries to learn and adhere to our values and laws. But if we allow others to strip away our values, to create a climate of fear and suspicion, then we will be doing the terrorists job for them.