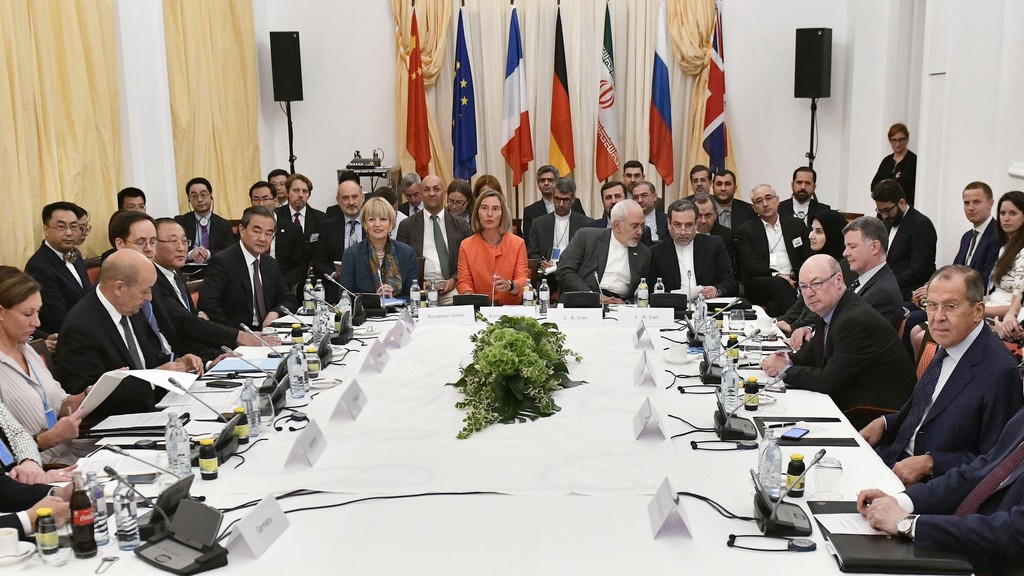 Opinion: The Islamic Republic’s aggressive actions over the past five years and its efforts to destabilize the region are clear and it would use its position as a nuclear power to entice countries seemingly beyond its reach to create a new world order

The Joint Comprehensive Plan of Action (JCPOA), signed five years ago, otherwise known as the Iran nuclear deal, was considered a triumph of global problem-solving and the first step towards a more peaceful and stable world order. However, in the years since, the reality on the ground has been anything but that.

On the fifth anniversary of the nuclear deal, the European Union, one of its major signatories and supporters, has to ask itself whether this agreement has brought us closer to peace and non-aggression or further away.

While many experts pore over the details of the agreement and debate whether Iran has held its side of the bargain, or whether the agreement still has relevance since the U.S. unilaterally reclused itself, it is important to look at the wider picture of Iran’s place in its region and the wider world.

While the JCPOA does not necessarily deal with many aspects of Iran’s aggressive action in the region, this aspect of relations with Iran and the dangers it poses can not and should not be ignored

Since 2015, Iran’s firm and bullish footprint, and destabilizing intentions, can be seen in the ruthless Houthi attacks in Yemen and against Saudi Arabia, the continued destabilization of Iraq, assistance in the brutal oppression of the Syrian people by its regime, de facto control of Lebanon and constant threats of direct military force towards its gulf neighbors with threats to international shipping lanes.

Furthermore, it has attempted terrorist attacks in Europe and tried to sink its teeth into many Caucus nations.

Iran has been at the center of all that has disrupted and disoriented a region still roiling from the Arab Spring and it has achieved all of this without acquiring nuclear weapons capability.

With nuclear weapons capability in the hands of the Ayatollahs, the whole regional dynamics change irrevocably. Alliances will be realigned and Iran as the “strong horse” in the region will dictate and influence everything that happens in the Middle East and further afield.

The significant progress of Iran’s ballistic industry brings it closer to capabilities which would pose a real military threat to many European countries.

A nuclear Iran will mark itself as a new regional leader. One that other nations in the region, even countries that are traditionally part of the Saudi coalition, will follow.

We have seen such an example in the war in Yemen, where there has already been a seepage of countries from the Saudi bloc towards the Iranian enemy, and of course it will happen much more widely if Iran succeeds in becoming a nuclear power.

As it has proven to date, Iran will know how to use with great diplomatic sophistication its nuclear capabilities to pull countries out of circles that now seem far removed from it, to connect with it and to form alliances that may change the current regional and even global order.

An alliance with China, which we are already witnessing, with India or Russia, or all at the same time, can create a completely different balance of power not only in the Middle East but beyond.

That a problematic player with nuclear weapons in the global community can flex its significant muscles in the international arena has already been witnessed by the behavior of North Korea in recent years. It has not been confronted by global powers and has an almost free reign to continue its belligerence towards its neighbors.

Nuclear, determined and armed Iran is much stronger and more dangerous than North Korea. It has far greater ambitions.

The world’s leading nations, including European countries, must unite not only against Iran’s nuclearization but also against the Islamic Republic’s policy of hegemony and intimidating the region.

Let there be no doubt, Iran is a major threat to Europe and European interests.

A nuclear armed Iran is a game-changer for global stability. It can no longer be seen as merely a regional threat, though that is where its immediate interests lie.

The Islamic Republic sees Europe as weak and has repeatedly threatened it militarily, diplomatically and economically, even though it is no seeming position to do so.

Europe is a key player for Iran. The European Union can place significant pressure on Iran to halt its regional aggression and roll back its nuclear program.

The Iranian threat can no longer be ignored. Another five years will be too late.

Dr. Moshe Kantor is President of the European Jewish Congress and the World Holocaust Forum, which brought nearly 50 world leaders to Israel in January

Moshe Kantor, the president of the World Holocaust Forum Foundation and the European Jewish Congress As a powerful symbol of society’s foundations, Jews have become a...
Read more